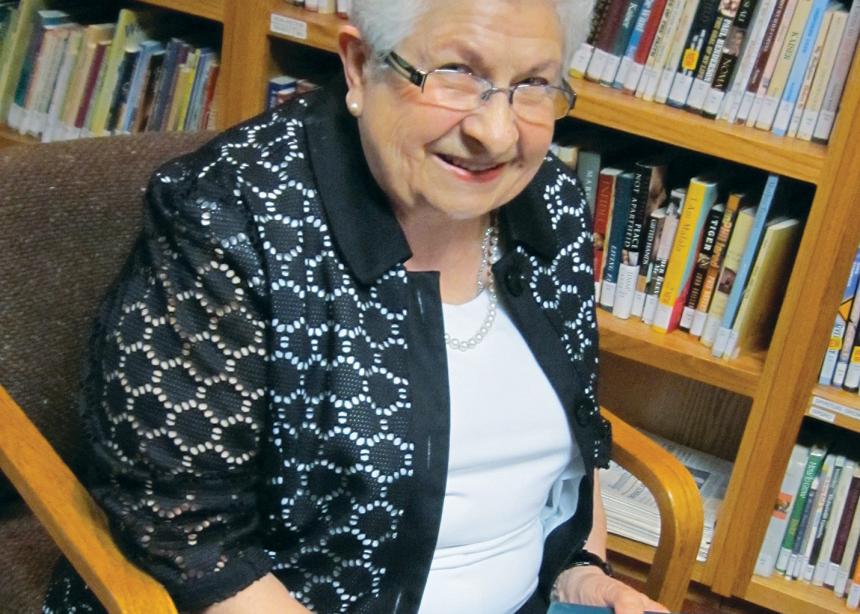 Louise Campbell poses with the New International Version Student Bible and a copy of the most recent ‘Season of reading guide’ used by Leamington (Ont.) United Mennonite Church to increase biblical literacy in the congregation for the past two years. (Photo by Dave Rogaslky)

While many congregations are shuttering or repurposing their education wings, Leamington United Mennonite Church built a whole new addition in 2011, replacing a 1959 building that had been linked to their new worshipping and office space when they were built in 1984. The new wing includes a dedicated prayer space as well as a suite of offices and a board room that is in high demand for adult study and discussion groups.

Victor Winter, coordinating pastor, says the church had already been looking at how to have a dedicated prayer space, and this seemed to be the perfect location, adding, “The prayer room has become a focal point for the work of the church.”

Staff now meet four days a week to pray through a liturgy given them by the recently deceased Anabaptist Mennonite Biblical Seminary professor emeritus Alan Kreider. At the end of the prayer time, they say together, “Lord, you will be at work today; help us to see where you are working, and show us how we can enter in.”

Congregational needs are remembered during this prayer time, and David Dyck, associate pastor, notes that people have begun to attend, especially a day or two before they have surgery or when other crises arise.

Leaders have also used the room for some sensitive meetings where they especially have desired to have God’s guidance on difficult decisions.

In, Up, Out: three dimensions of ministry
Missio Dei is a concept that runs through the ReLearning Community project being supported by Mennonite Church Eastern Canada. Dyck and a number of others from the church are in the third year of this process being led by Three Dimensional Ministry (3DM) from Europe. The three dimensions are:

• In: Caring for one’s own life.
• Up: Focussing on one’s spiritual life and relationship with God.
• Out: Moving out into the community to make disciples.

The congregation is at the stage of trying to form missional communities that will see Sunday morning as only part of their “church life.” The other part will be a small group that meets weekly or bi-weekly, encouraging each other in their Up, In and Out lives. This is a difficult point in ReLearning Community, as often there is pushback on the idea that anything is as important as Sunday morning.

Dyck already sees the congregation embracing ministry outside the church walls. The community right around the church building has many new Canadians, and the congregation provides space and assistance to children after school. He acknowl-edges that “knocking on doors” to invite people to programs like a neighbourhood Halloween carnival is outside the comfort zone of many Mennonites.

The church hopes to be a “community of healing and hope” in Leamington. Two houses, bought years ago with the idea of expanding the parking lot, have been made available recently for people who need housing but cannot easily afford what is available.  Relationships with the church have flourished from these gifts of housing.

In addressing the Up dimension, the church has spent the past two years reading through most of the Bible in “A season of reading.” Designed by another associate pastor, Mike Williamson, regularly prepared reading guides have given congregants guidance in their readings.

On Sunday mornings, pastors took turns preaching on the material read the previous week, which meant addressing some hard topics. Purchase of the New International Version Student Bibles gave everyone the same, relatively simple translation to use. At least one couple began coming to Leamington United Mennonite because of the program and recently became members.

8 Cities, an In program for married couples, was sponsored by the congregation for about 40 couples. Created and presented by Joe and Carolyn Burjoski, the program (8cities.org/) introduces participants to eight different cities, exploring different aspects of marriage. For example, Paris, the city of love, focusses on sexuality, and Tokyo, on communications. Couples ranged from newlyweds to those who had silver weddings behind them. 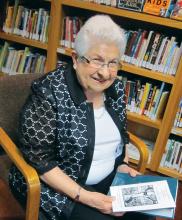 Louise Campbell poses with the New International Version Student Bible and a copy of the most recent ‘Season of reading guide’ used by Leamington (Ont.) United Mennonite Church to increase biblical literacy in the congregation for the past two years. (Photo by Dave Rogaslky)