Gifts to the church 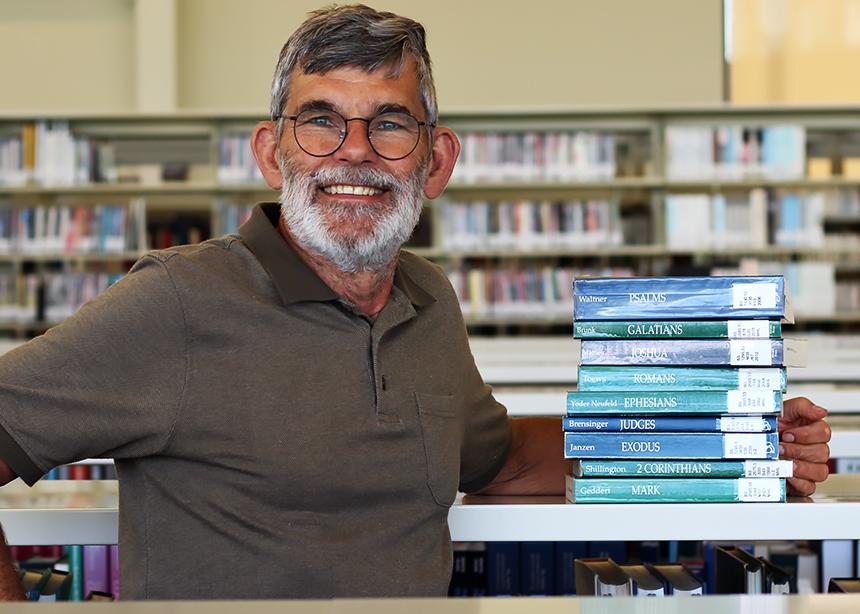 Dan Epp-Tiessen wrote the most recent volume of the Believers Church Bible Commentary series on Joel, Obadiah and Micah, which will launch in October with an event at the CommonWord Bookstore and Resource Centre in Winnipeg. (Photo by Nicolien Klassen-Wiebe)

The collection of commentaries covers every book of the Bible, written by various biblical scholars across North America. Herald Press has published 35 volumes since 1986, and almost all of its final nine are currently in progress.

“It reflects the Anabaptist perspective that the Bible matters for Christian life today. So, writing a commentary is not just an academic exercise . . . but it’s supposed to be a gift to the church and something that informs Christian life and practice,” says Dan Epp-Tiessen. The former professor and pastor wrote the series’ most recent release, available in August, covering the biblical books of Joel, Obadiah and Micah.

Sheila Klassen-Wiebe, associate professor of New Testament at Canadian Mennonite University (CMU) in Winnipeg, is currently writing the commentary on James. “A commentary opens up and unpacks the scripture passage. Its purpose is to help readers understand the text, to interpret what is being said, so people who preach on and study the Bible can understand it better,” she says.

Although published in the United States, the series counts a significant number of Canadians as authors. More than 10 others, in addition to Epp-Tiessen and Klassen-Wiebe, have written commentaries, ranging from Exodus all the way to Philippians.

The Believers Church Bible Commentaries are solidly academic, but they are still accessible to all, rather than some commentary series that are designed primarily for people who have spent years in academia. CMU students writing essays in biblical and theological studies courses quickly learn to make a beeline for the library section with the Believers Church commentaries.

Each portion of scripture in the commentaries is discussed in three sections: analysis of the scripture and how that text fits into the biblical context and the life of the church.

Biblical texts don’t stand alone but rather participate in the larger biblical drama. Context is vital to understanding scripture, and commentaries help people learn that. For example, Obadiah condemns the Edomites who persecuted Israel in the Babylonian exile. Yet Epp-Tiessen found that reading the book in its biblical context revealed that Israel previously subjected Edom to 400 years of colonialism and oppression.

The book comes from a time when Israel had been brutally traumatized by Babylon; these texts helped that community survive. But reading the Bible in a different time means we can’t understand it the same way.

“How do we hear these texts today, given that it’s such a different context?” Epp-Tiessen says. “That needs to be front and centre in terms of how we appropriate and interpret these texts.”

Gordon Matties, chair of the editorial council and author of the Joshua commentary, says, “The BCBC series is the first commentary series in the Believers Church tradition, which includes Anabaptists and Brethren churches. Menno Simons and other 16th-century Anabaptists quoted and interpreted the Bible, but none wrote extensive commentaries on biblical books.”

This means the writers are examining scripture through an Anabaptist theological perspective, with a commitment to peace and community. It isn’t always obvious, but it’s always present. When Epp-Tiessen wrote about the Book of Obadiah, he had to address that God’s salvation comes through the annihilation of Israel’s enemies. While other commentators might ignore this, Epp-Tiessen says, “I refuse to not deal with those kinds of issues.”

The Anabaptist position since the 16th century has been that we see the fullest revelation of God in Jesus, he says. “So, we read all of the Bible in light of Jesus . . . that Anabaptist perspective gave me the courage and confidence to say, ‘I’m going to read Joel and Obadiah and Micah in light of Jesus, and not shy away from the problematic features of these books.’”

She says that being a woman and a feminist are also lenses she brings to the text. In her commentary on James, she writes a section on the imagery of birth and God as mother. While men may notice this too, it contains a different level of meaning for her, a mother who has given birth.

Klassen-Wiebe is the first Canadian woman to write a commentary for the BCBC series and is part of the small percentage of the series’ female authors. The titles published so far have been authored by 36 writers and only two of these have been women.

Matties says the editorial council was aware of the need for gender balance since the beginning and acknowledges it didn’t achieve it. The council searched for women to write for the series but struggled to find many. He says the council prioritizes specialized biblical expertise over any other author criteria, and there are few female biblical scholars in the peace church tradition. However, six of the authors secured to write the remaining nine volumes are women.

The editorial process for each commentary is a thorough one. The manuscript is reviewed by the editorial council, a team of scholars from six different denominations in the peace church tradition, with around 40 years of experience in biblical studies. Two lay readers, an assigned editor and a copy editor also work on it.

“In the Anabaptist tradition there’s been an emphasis on community hermeneutics, that it’s not just the hierarchy that interprets the Bible and tells the rest of us what to think about it,” Epp-Tiessen says. “The very editing process has that community hermeneutic built into it.”

The BCBC series is still directly engaging Canadian Mennonite pastors, and not only as a dependable resource. For the 2021 edition of ReNew, CMU’s annual conference on resourcing church leaders for ministry, BCBC authors led sessions on preaching from the books of the Bible on which they had commentated, specifically in the Canadian Mennonite church context.

“We hope these commentaries will spark more conversation about the Bible in the life of the church,” Matties says. “This commentary series should be in every church library, not just in the pastor’s library.”

Editor's note, in the interest of full disclosure: Sheila Klassen-Wiebe is the mother of the author of this article. 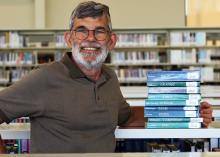 Dan Epp-Tiessen wrote the most recent volume of the Believers Church Bible Commentary series on Joel, Obadiah and Micah, which will launch in October with an event at the CommonWord Bookstore and Resource Centre in Winnipeg. (Photo by Nicolien Klassen-Wiebe)