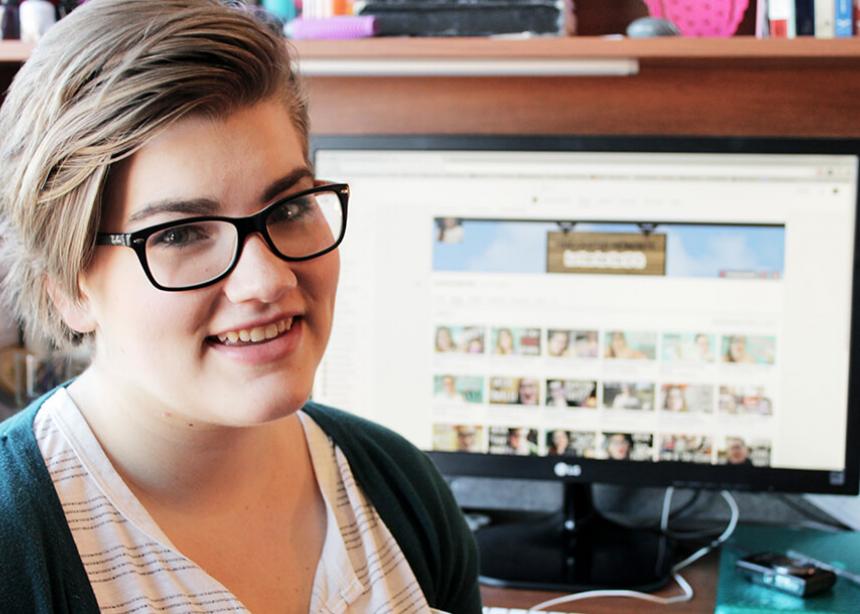 It could be that thousands of people have learned about Mennonites from Katie Steckly.

Early last year, the 19-year-old, who grew up in Milverton, Ont., and is a member of Riverdale Mennonite Church near Millbank, uploaded a short video to her YouTube channel entitled “Being Mennonite 101,” in which she listed five characteristics of North American Mennonites. Since then, the video has been viewed more than 19,500 times.

“Being Mennonite 101” was a follow-up to “Ask a Mennonite,” a five-minute video she posted to YouTube a month earlier. In that video, which has been viewed more than 16,700 times, Steckly spoke about questions people unfamiliar with Mennonites ask, including “Does your family drive a buggy?” and “Do you live on a farm?”

Shot against a bright blue wall and delivered with a heavy dose of humour, the videos explore not only the Swiss- and Russian-Mennonite culture familiar to many Canadian Mennonites, but also delve into Mennonite history and beliefs. Steckly explains to viewers that there are Mennonites of many nationalities and cultural backgrounds. “It’s awesome, because that just means the food keeps getting better,” she quips.

In the past year-and-a-half, Steckly has posted a series of other Mennonite-related vlogs (video blogs), ranging in topic from Mennonite jokes to Mennonites and gay marriage.

For Steckly, who has been making videos and posting them online since she was 12, creating content about Mennonites was a calculated move at first. She and her older brother, who also makes videos, were talking about how they could get more views on YouTube. They concluded that producing niche content would help them stand out.

Not that many people on YouTube are talking about Mennonites, Steckly reasoned, so she created “Ask a Mennonite.”

“Originally, it was a strategic thing,” says Steckly. “Then I realized I enjoy talking about it, so that’s why I continued with it.”

Steckly has always been interested in Mennonite history and theology, and the videos have given her the opportunity to think through her faith and background. “It’s been good for me to analyze my own beliefs, get to what’s at the core of them, and be able to explain them to other people, rather than relying on assumptions or what I’ve always been taught,” she says.

While at least one YouTube commenter has accused Steckly of being rude and sarcastic in the “Ask a Mennonite” video, Steckly maintains that her videos are meant to be humorous.

For Steckly, who also creates vlogs on other topics and writes a blog about fashion and student life, creating content for the Internet is a way to pursue her interests. She objects to the idea that her videos are an example of millennial narcissism. Every generation is obsessed with itself, Steckly says. Her generation is simply one of the first whose young people have the opportunity to broadcast themselves online.

“I don’t think there’s anything wrong with me having an idea and putting it out there for other people to interact with,” she says, adding that posting vlogs and selfies online can be empowering. “[From a young age], women in particular are taught to not love themselves and to critique themselves super harshly,” Steckly says. “I think it’s great that we’re starting to foster a culture of self-love and self-appreciation.”

Steckly has a fan in Orlando Braun, a Winnipeg filmmaker who came across her videos while doing research for his forthcoming documentary, That Mennonite Joke, which explores humour in Mennonite culture. Braun says he was impressed by the simple style and playful tone of Steckly’s videos.

“It’s young, it’s fresh,” Braun says. “It’s [Steckly’s] millennial voice that inspired me, because she’s trying to keep alive this Mennonite culture and she’s using humour a lot to do that.”

Braun was further impressed when he interviewed Steckly for his documentary. “She’s exactly as delightful in person as she is in those videos,” he says. “That was refreshing for me.”

Steckly’s mother, Karen, says she wasn’t overly concerned when her children began posting videos online, so long as they didn’t give out personal information and use chat rooms. She may not agree with everything her daughter says, but wants her to be able to develop her own voice and express her own opinions.

“I don’t know if [it’s my] personal bias or not, but I find her very funny,” Karen says, adding that the videos are also thoughtful. “I think sometimes her grandparents don’t always agree with her videos . . . but she makes them think, and that’s a good thing. Even if we don’t always see eye to eye right away, being thought-provoking is never a bad thing.”

Steckly is currently working on a bachelor of arts degree in English at the University of Waterloo, Ont., with minors in peace and conflict studies, digital arts communication, and Mennonite studies. No matter what she works at after graduation in a few years, she wants to continue creating content for the web. “I just hope I get to continue doing the things I do online, because I really like it,” she says. 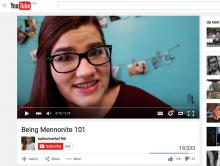 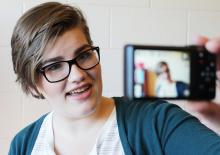