Being the church in an age of anxiety 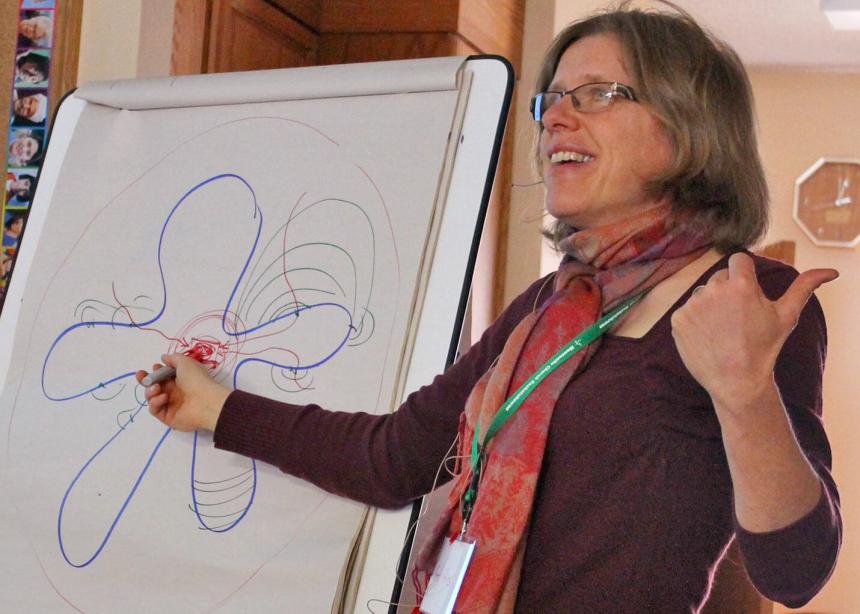 High anxiety is a characteristic of this age. Political and economic uncertainties abound, and electronic media, purported to help people connect with one another, actually seem to make them feel increasingly isolated.

These realities were the starting point for discussion as Mennonite Church Saskatchewan pastors explored what “Being the church in the 21st century” means. They met at Mount Royal Mennonite Church on April 28, 2017, for a one-day workshop with Betty Pries of the L3 consulting group.

“We are living in a time of significant social upheaval, the magnitude of which has not been seen for 500 years, some say thousands of years,” Pries told participants. It is a time characterized by secularism and by multi-faith communities. It is also a time of changing social norms, consumerism and increasing disparity between those who have and those who have not.

Social media has created unprecedented challenges. The seduction of being perpetually connected has left many people ill-equipped for solitude. “Young adults are most likely to commit suicide right before bed, after they turn off their devices, because they fear being alone,” said Pries. Applications like Facebook provide endless opportunities for social comparison and meaningless distraction. The immediacy of news stories also elevates anxiety as people worry about what’s happening right now.

While churches may lament the changes technology has wrought, there is also reason to be hopeful. “We, as congregations, have a huge missional opportunity,” said Pries. High school students, because they are digital natives, recognize that technology isn’t meeting all of their needs. “They are wanting to return to faith,” she said. “They are saying, ‘We need something bigger.’”

Another characteristic of this time is the polarity between modern and postmodern viewpoints. Modernism values solid truth and social agreement. The self is centred and has a sense that there is “something bigger than me” out there, said Pries. By contrast, in postmodernist thinking, truth is subjective and individual experience matters. The self is not centred, but rather keeps moving depending on context.

Pries argued that each viewpoint has something to offer, and that both are needed. “The only way we can honour my experience is by thinking that there’s something bigger than myself,” she said. “We can’t solve the polarities with either/or thinking; we can only solve [them] with both/and thinking.”

She added, “People are searching for meaning, purpose and belonging. This is what the church has to offer.” Her question for participants was, “How does the church speak into the world’s profound spiritual, emotional and mental health needs?”

Garth Ewert Fisher of Mount Royal Mennonite said that the church offers one of many competing narratives. “We can claim we have the centre, but others claim they have the centre, too,” he said.

“What do we mean by centre?” asked Pries. Some suggest orthodoxy is the answer, but, she said, “right beliefs always come last. Jesus didn’t push right beliefs; he challenged the people who used right beliefs as a weapon. Jesus loved people and taught the love of God. The centre is that God loves us, not what we believe.”

Thriving churches in an age of anxiety, said Pries, offer people “a safe ‘container’ or a place of rest.” They have leaders people want to follow, and they engage in deeply meaningful worship. Authentic relationships give members a sense of belonging, but thriving churches also provide members with meaningful avenues for participation and are highly missional. Their policies and procedures are nimble and effective, and they possess a healthy self-awareness. In addition, such churches practise self-compassion, giving themselves permission to be human.

In small group discussions, participants sought to answer the question, “How do you become the people you need to be in order to answer the call of being the church in the 21st century?” Their answers included practising devotion to Jesus, loving God and others, never forgetting that God loves his people, putting Anabaptist belief into practice, and walking together in difference and love.

See more in the Focus on Mental Health series:
On becoming a better person
Walking toward wellness
Shimmering peace in the midst of darkness
Healing for soul and spirit
Mental health and ‘having faith’
When mental illness drops in at church
Learning to let go
Students find relaxation through ‘puppy therapy’ 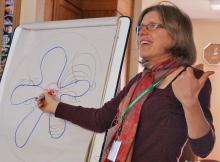