A beautiful tapestry of yellow 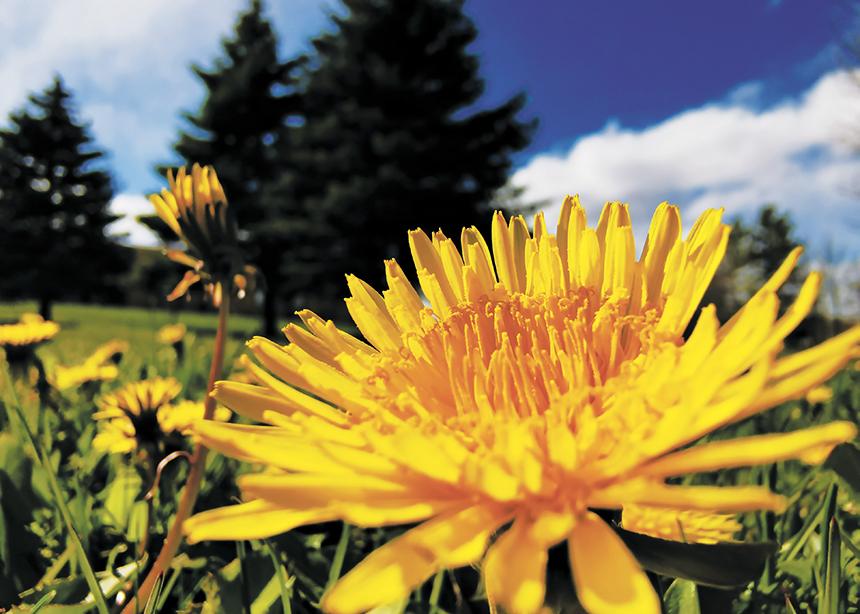 The gospel of dandelions makes a lot of sense. In this gospel, a wild and stubborn counterculture thrives in a world of domesticated lawns. (Photo by D. Michael Hostetler)

I have a problem with dandelions. Late spring is high season for dandelions, when those bright-yellow blooms make their presence in yards and fields abundantly clear. Within a month or two, the flowers will be gone and the dandelion leaves will blend pretty well into the rest of the grass. Fresh from a good mowing, our lawn will look nice enough through the summer.

But right now, the truth cannot be so easily concealed. I suspect that a tipping point has already been crossed some time ago, and there is probably no straightforward way back to the lush, weed-free lawn that I look upon with envy in many impressive yards around my neighbourhood. I always take up the cause with renewed zeal for a short time in the spring, but soon I succumb to the overwhelming reality of the situation.

When I do go out to take up the lawn-care battle, I often think of Jesus’ parable about the sower in Matthew 13:1-13. The kind of sowing that Jesus describes in this little story is more like the spreading of grass seed than anything else. The seed goes down first, scattered widely to fall where it will. Then the sower tills the soil to allow good contact for the seeds, which the sower hopes will take root and sprout. Low precision, perhaps, but a lot gets planted.

Jesus describes the varied fates of this scattered seed, and I can imagine all of the conditions he mentions in my own yard:

Occasionally, I have even seen proof of the seed falling on good soil that actually grows to fill in that patchy section of the lawn.

To the crowds gathered around him as he speaks, Jesus leaves his cryptic story hanging in the air. They don’t get it, but that’s nothing new. The previous chapters of Matthew describe Jesus’ growing frustration with the many who do not respond to his ministry. They look without seeing and hear without listening. Jesus’ own disciples don’t have much more of a clue, until he finally takes them aside and offers an explanation. The parable, he says, is about hearing and understanding. It is about where the seeds of the kingdom will take root and grow.

The mystery of growth

Why do some respond readily, and others do not?

I suspect we ask this question with as much urgency as the early communities of Jesus-followers did. Why do some come to faith in Jesus while others take a different life path? What makes for receptive soil? And how do we make sense of those seeds that don’t grow in the way we had hoped, no matter how carefully we tended to them?

A few things come to mind on this as I think about the parable.

First, there is no straight line between sowing and reaping. When you plant seeds, the outcome is unknown; it is a mystery. Sometimes seeds just don’t sprout and grow. This is a reality we are familiar with, and one Jesus seems to have known, too, whether the problem is birds or rocks or weeds, or who knows what else. Jesus spent years teaching and healing and proclaiming the good news of God’s kingdom. Lots of seeds were planted. But what did he harvest out of all that effort? Twelve shaky disciples and a lonely journey to the cross.

This will sometimes seem unfair, and it will sting from time to time. We carry the heartache of hopes and dreams that are not realized, of lives that go off the rails, or at least off the script that we had so wanted to see followed.

But there is another side to this. The mystery of seeds also means that other things will grow, and in ways we cannot dare to imagine. We plant and tend and water, but God gives the growth. This is a good thing; otherwise, what grows would be limited by our capacities and our imagination.

Often we don’t get to see the fruits of what we’ve planted. Sometimes the growth happens in other places, or even after we’re gone. Sometimes others get to experience the harvest of our planting, and that’s good news too. You can probably think of times when the grace of God erupted in good things that you could not have imagined. A long period of dormancy is suddenly broken by a little green shoot that promises life and a new beginning.

The seeds Jesus planted and the seed he became for us continue to bear fruit in strange, wonderful and spectacular ways, harvests of 30- or 60- or 100-fold! This is the mystery of grace that works life from that which is left in the ground for dead.

That mystery is at work even where there is no sign of hope, even when the story seems over and the window for redemption past. Even when we grieve and say our goodbyes, carrying wounds in our hearts that may never heal. Even then, the God of seeds does not stop acting, working patiently in the lives of God’s children.

A second thing this parable suggests is that you have to be a disciple to see what’s going on as the kingdom of God comes alive. To the crowds, Jesus tells a story that is simple but rather impenetrable. But then he turns to his disciples and says, “Blessed are your eyes, for they see, and your ears, for they hear!”

What makes the disciples able to see and hear the secret of this parable? Why does Jesus reveal it to them? Is it because they are particularly shrewd or observant? Because they had a certain kind of breeding or upbringing?

No. In fact, these disciples are a sorry lot. The reason they’re given a window into this mystery is because, when Jesus called them, they dropped what they were doing and followed him. They left their nets and their fishes, their families of birth, their wealth and livelihoods. They set out on a journey of transformation as disciples of Jesus. That journey would change their hearts and minds, their eyes and their ears.

The kingdom of God is here, in our world and all around us. The God of creation is everywhere at work, tending a garden in which all are welcomed and valued and given what they need to flourish and grow. The things that kill and destroy cannot overtake this abundant harvest. By the power of the Holy Spirit, new life continues to spring up everywhere we look.

How do we see it? Where is this kingdom that does not have walls or borders, that does not compete for space with the kingdoms of our world, that renews creation from the inside out? Most of the time, what we see when we look out the window is not especially promising.

A gospel of dandelions

In 2013, Mennonite Church Eastern Canada celebrated its 25th anniversary, taking for the celebration this theme of seeds and the parable of the sower. My congregation received a lovely commemorative “In every seed, a promise” banner featuring an image of seeds carried on the wind, released to wherever they might end up planting themselves. If you look at it more closely, these seeds are actually coming off a dandelion!

The gospel of dandelions makes a lot of sense. In this gospel, a wild and stubborn counterculture thrives in a world of domesticated lawns. It is resistant to pressure and persecution, and almost impossible to get rid of.

Its members are strongly rooted and nourished by deep wells of water and nutrients. They sprout edible leaves that can provide nourishment to others. Their bright flowers stand out, proclaiming their truth.

And as they die, their seeds offer themselves to the wind of God and the mystery of growth. They take flight on the Spirit’s breath until they settle and take root wherever they are sent. Then comes an abundant harvest: a beautiful tapestry of yellow for those with eyes to see more than a weed gone out of control.

The kingdom of God is popping up all around us, like dandelions.

Adapted from a sermon by Kevin Derksen, preached at St. Jacobs (Ont.) Mennonite Church on May 13, 2018.

1. What advice do you have for those trying to achieve a lush lawn without dandelions? Is it worth the effort? What things help us to see the beauty in dandelions?

2. Kevin Derksen writes, “We can plant seeds, but we can’t make them grow.” How do you respond when the seeds you planted with hope don’t germinate, die as small seedlings or get eaten? Do you respond differently when seeds planted by your church result in a meagre harvest?

3. Derksen says that sometimes the seeds we sow bear fruit “in wonderful, strange and spectacular ways.” Can you think of examples of when you have been surprised by where the Kingdom of God has grown? In these days of shrinking churches, where are the little green shoots that we might not be seeing?

4. What do you think Derksen means by a “gospel of dandelions”? Who might be the people who make up the “wild and stubborn counterculture that thrives in a world of domesticated lawns”? In what ways can dandelions be seen as a message of hope? 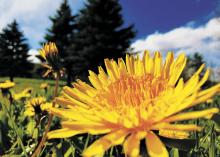 The gospel of dandelions makes a lot of sense. In this gospel, a wild and stubborn counterculture thrives in a world of domesticated lawns. (Photo by D. Michael Hostetler) 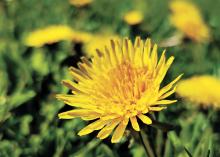 “In this gospel, a wild and stubborn counterculture thrives in a world of domesticated lawns.” (Photo by D. Michael Hostetler)

In 2013, Mennonite Church Eastern Canada celebrated its 25th anniversary, taking for the celebration this theme of seeds and the parable of the sower. My congregation received a lovely commemorative “In every seed, a promise” banner.