'Be It Resolved' released 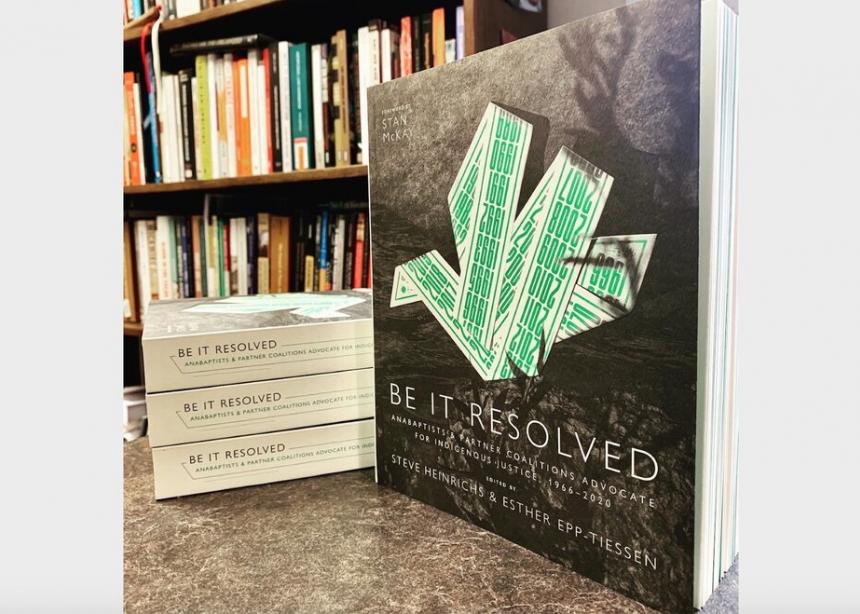 A new anthology published by Mennonite Central Committee (MCC) Canada and Mennonite Church Canada hit the press this fall. Be it Resolved: Anabaptists & Partner Coalitions Advocate for Indigenous Justice, 1966-2020 is a collection of more than 90 documents detailing commitments Anabaptists have made to Indigenous justice and decolonization since the 1960s.

“I was aware of a handful, but as soon as I started digging in the archives I found incredible, old, significant commitments,” says Steve Heinrichs, director of Indigenous-Settler Relations for MC Canada. “Everything from Indigenous self-determination, recognizing native sovereignty and advocating for a resolve to Indigenous land claims. Big things!”

The work was originally meant to be a pocket-sized booklet, like those created for the Truth and Reconciliation Commission’s Calls to Action or the United Nations Declaration on the Rights of Indigenous Peoples. At the time of printing, the manuscript had ballooned to 480 pages.

Heinrichs and Esther Epp-Tiessen, historian and former peace educator for MCC, co-edited the collection and provided historical context for each of the documents featured in the text. Documents are presented chronologically and are prefaced by quotes from Indigenous voices calling for action to address injustice.

“This work is about pockets of the church being responsible and collectively responding in faithfulness, but it’s always the cries of Indigenous Peoples that move the church to action,” says Heinrichs.

Be it Resolved details how, over six decades, Anabaptists in Canada have addressed Indigenous land rights, access to water, education and housing, missing and murdered women and girls, the legacy of residential schools and restorative responses to crime.

The work is evidence of concern and solidarity action for Indigenous justice, but there is candour in the introduction about the colonial mindset impacting some of the commitments. The anthology begins with a problematic resolution by the Conference of Mennonites (CMC) in Canada in 1966 that encouraged Mennonite families “to adopt and foster homeless Indian and Metis children,” at the height of the Sixties Scoop.

“This is not a linear progression of ‘enlightenment,’ ” says Epp-Tiessen. “It’s not like we start at 1966 in kind of a colonial way and it just gets better and better and better. Some of the most profound and radical commitments come from the ’70s and ’80s.”

For Epp-Tiessen, the resolution made by CMC in July 1988 is profound. Epp-Tiessen visited Labrador at the time as an MCC board member, and witnessed the trial of Elizabeth Penashue, one of several Innu grandmothers who walked onto an air force runway in protest and were arrested. The resolution expressed solidarity with Innu people in Labrador, who were trying to stop low-level military training flights over their land. It resolved to challenge the Government of Canada to recognize “the Aboriginal rights and aspirations of Native people.”

“History is always important because it’s important to know where we come from, what our story has been, what our relationships have been,” she says.

Stan McKay, a retired United Church minister and Woodland Cree from Treaty 5, wrote the foreword for the book. He details his long history of connections with Mennonites and their Indigenous ministries, writing that the documents reflect “the faith of peacemakers who are growing in their awareness of the injustices experienced by Indigenous peoples in Canada and the world.”

There is an eight-session study guide by Kathy Moorhead Thiessen and Vic Thiessen at the back of the resource. The sessions include suggested readings from the anthology, discussion questions and actions of response.

For Epp-Tiessen, the book confirms that Indigenous justice, along with climate action, is the most important peacemaking agenda Mennonites have right now. It leads her to ask, “Do these statements come alive in the responses of ordinary people, ordinary churches, ordinary followers of Jesus?”

Be it Resolved is available for purchase through CommonWord.ca. To read an interview with the co-editors and graphic designer, visit bit.ly/2V4J6U3.