‘Be bold! Make yourselves known!’ 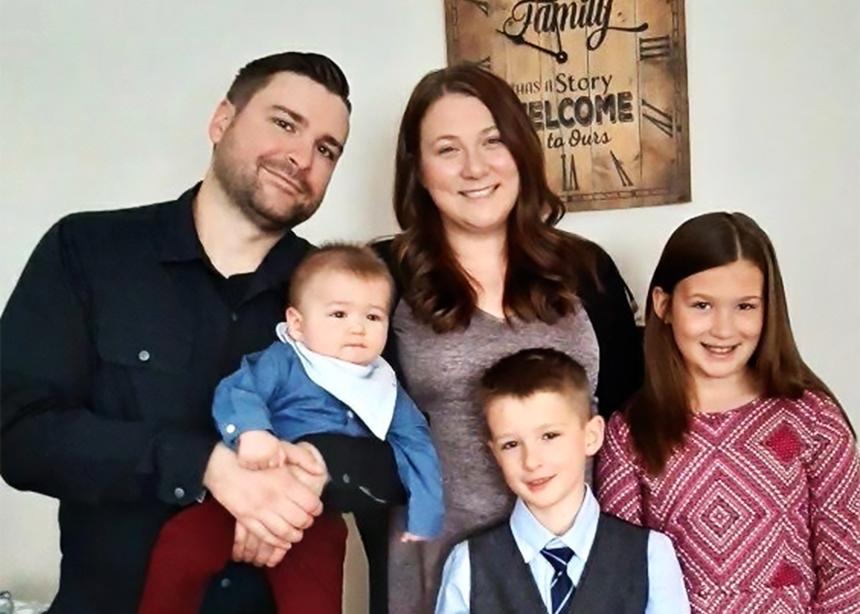 Steven Giugovaz, pastoral intern at Bergthal Mennonite Church in Didsbury, Alta., is pictured with his wife Emily and their children Luka, Walter and Lahna. (Photo courtesy of Steven Giugovaz)

Giugovaz is not a Mennonite name, but Steven Giugovaz is definitely an Anabaptist. Son of immigrants from Italy and with a Croatian heritage, he has been on a journey that has led him to embracing a Jesus-centred theology whose world isn’t flat, a commitment to peace and an admiration for the early “re-baptizers.”

Now a pastoral intern at Bergthal Mennonite Church in Didsbury, Alta., he talks about his experience in the Mennonite world. “Mennonites need to re-discover their evangelical roots,” he says. “Anabaptists have a lot to offer a world who hungers for peace.”

He wonders whether Mennonites are willing to open their hands to the “other.” “Every Mennonite church I have ever visited has asked me if I am related to a Mennonite,” he says. ”It sometimes feels like, if you do not have a Mennonite name, you are treated with suspicion.”

That being said, one of the reasons the Giugovaz family joined Bergthal Mennonite was its warm welcome and authentic spirit, even when people asked with surprise, “So why did you come back?” Although Anabaptists were historically “outsiders,” he hopes Mennonites can see that there is now openness to their teachings. He voices this challenge: “Don’t be afraid to look outside yourselves.”

Currently finishing a bachelor in pastoral ministry degree from Prairie Bible College in Three Hills, Alta., 37-year-old Giugovaz talks about his ultimate dream, which is to work in a setting where he can help different denominations come together. Growing up, he often heard people talking badly about other
churches. He says this drove him crazy and fuelled his passion for church unity. “The Kingdom of God is more than just us,” he exclaims.

One of his pet peeves is labels. He doesn’t like labels, such as “conservative” and “liberal,” which are words that mean different things to different people and cause unnecessary tension among Christians. He notices that many Mennonites do not like the term “evangelical,” even though it is a broad term that has so many views and ideas under that one umbrella. In his experience, some see the term as synonymous with “Protestant,” or with the idea of “hell and brimstone.” He wonders if, instead of being a stumbling block, “evangelical” could be redeemed.

Giugovaz describes himself as “a Christian with Anabaptist views.”

Anna-Lisa Salo, Bergthal’s senior pastor, says having Giugovaz as an intern has been energizing—especially during COVID-19. “To look at pastoral ministry through the eyes of a new person, someone enthusiastic and idealist, that transfers to the supervisor,” she says. “I’m loving it!”

Although initially uncertain if she had the time, or was equipped to supervise anyone, Salo has found the resources provided by Prairie Bible College very helpful. She has been surprised to discover that she does have the ability to mentor someone going into ministry, saying, “It has given me a sense of who I am as a pastor.”

In addition to meeting weekly, Giugovaz journals, preaches and visits congregants. He is required to complete 500 hours and, in return, receives an honorarium. He has especially enjoyed visiting the members, sharing meaningful conversations centred on questions he sends out in advance. They include: “What do you think the surrounding churches think of Bergthal?” and, “If you were given the opportunity to build your version of the ideal church, what would it look like?” He also explores why being an Anabaptist is important to people.

Salo mentions that he can get away with asking any question, as the church is committed to helping him learn and grow.

Growing up in a non-denominational church in Ontario, Giugovaz was especially influenced by his pastor, whom he describes as someone gentle who embodied Christ in life. Later, he discovered that pastor was from a Mennonite background. When his pastor passed away while Giugovaz was in his teens, he found it hard to connect with the new leadership that kicked him out of the youth group for asking too many questions. After a rebellious stint, he returned to the faith, never having fully left it.

Giugovaz hopes to begin working towards a master’s degree next year. He loves interning at Bergthal and the experience has confirmed his calling. He has been surprised by how fulfilling it has been, saying, “The more I do it [pastoring], the more I want to do it.”

Going forward, he humbly challenges Mennonites to get more into their communities, sharing ministry with other denominations, regardless of their beliefs. His heart is to see denominations building unity and being open to conversation around their differences. Believing that Anabaptists have good news to share, he enthusiastically encourages the church not to be shy: “Be bold! Make yourselves known!”

Related stories:
‘You must be a Mennonite!’ 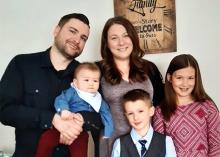 Steven Giugovaz, pastoral intern at Bergthal Mennonite Church in Didsbury, Alta., is pictured with his wife Emily and their children Luka, Walter and Lahna. (Photo courtesy of Steven Giugovaz)