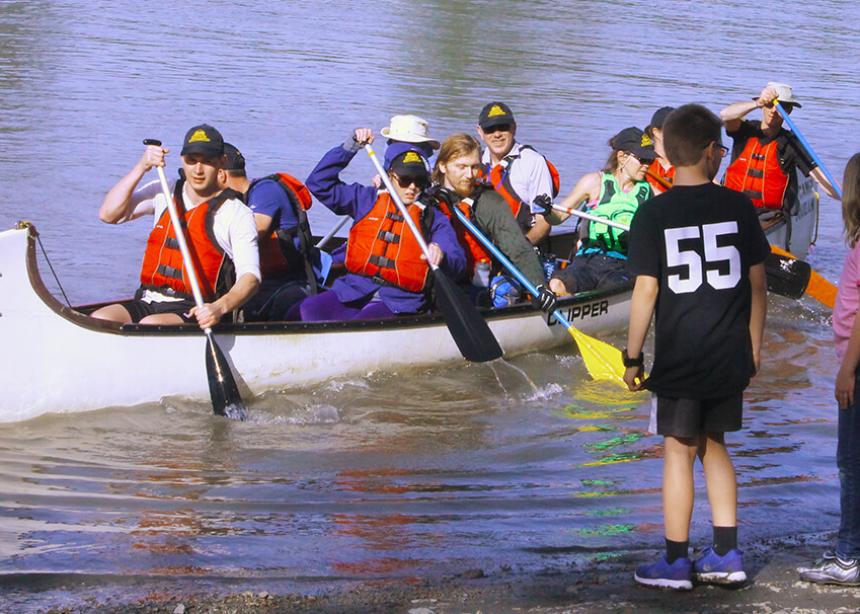 The number of people in the vessels may have been smaller this year, but it didn’t seem to matter in the end for the total earned at the 2016 Camp Squeah paddle-a-thon

When the canoes and kayaks arrived at the Fort Langley marina on April 17, 2016, the paddlers who had started out from Hope the morning before learned that they had helped raise $42,000 for the Camp Squeah summer staff bursary fund. The fund helps support college and university students who give of their time to work at Camp Squeah, Mennonite Church B.C.’s camp, for the summer months.

“It’s been huge in getting quality staff to come back year after year,” commented Rob Tiessen, the camp’s executive director. “It’s not about how many paddlers are in the water, but how much money is raised.” This year, 17 participants earned proportionately more than 34 paddlers had done last year.

Paddlers are supported by sponsors and must raise at least $500 each. Many, of course, raise much more than that. This year, top earner was Zach Kuepfer, who was given the traditional prize of a canoe.

For some participants, the annual trek down the Fraser River is a not-to-be-missed undertaking. Scott Alexander, a member of Sherbrooke Mennonite Church in Vancouver, has taken part in all but one of the last 15 such events, and wholly supports its purpose.

“The paddle-a-thon is a great outdoor event that brings people together from all over the Fraser Valley,” he says. “Both of my boys love to go to Camp Squeah. I think it is important that the people that counsel my kids at summer camp know they get a little bit of extra money when they return to university in the fall.”