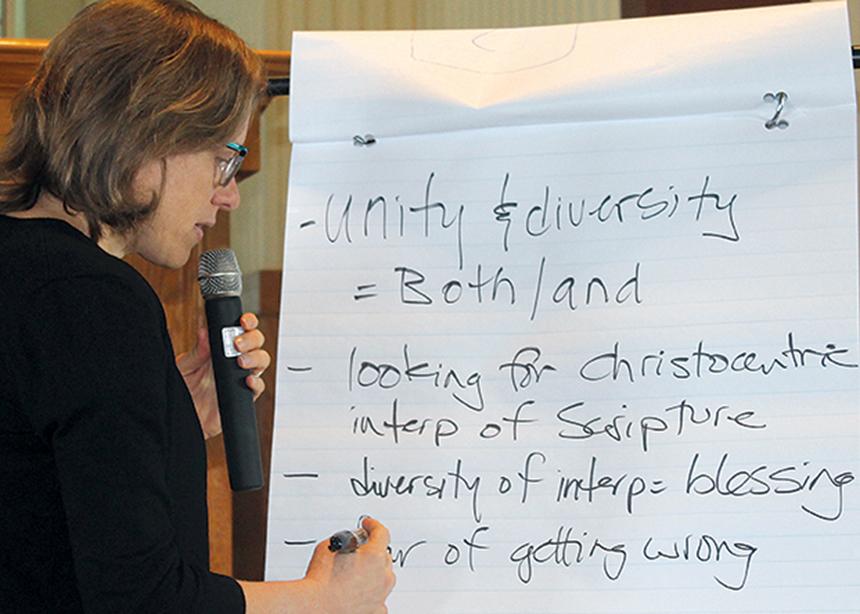 Betty Pries, resource person at the 2018 MC B.C. annual gathering, notes issues of unity and disunity identified by delegates in a session on addressing discord in the church. (Photo by Amy Dueckman)

Hearing and respecting one another in the face of potential conflict was emphasized when Mennonite Church British Columbia met at Eden Mennonite Church on Feb. 24 for the regional church’s annual gathering. Those in charge of the meeting sought God’s wisdom and the delegate body’s cooperation.

“I pray that we will speak to each other with loving voices,” said moderator Lee Dyck in her opening prayer. In presenting her report later, she admitted, “This past year has been difficult. The positive thing that’s come out of all of this is the groundswell of prayer and affirmation.”

Most of the morning was devoted to addressing the general topic of “Discord in MC B.C.: A time of prayer and conversation,” facilitated by Betty Pries of Waterloo, Ont., a conflict, change and leadership specialist who had facilitated the previous day’s Lead sessions on “Engaging prejudice, power and privilege.” She asked all present to begin the day by creating an opportunity for conversation with a “safe and respectful listening space, to speak and truly hear each other.”

As Pries urged everyone present to “ground yourself in the image of God alive in each person,” she identified expectations, perceptions, needs or fears that influence how people approach conflict. “Conflict sometimes makes us feel insecure,” she said. “Be paying attention to which building block we are speaking from.”

Delegate Waldimar Neufeld of Emmanuel Mennonite Church in Abbotsford said, “We can have unity in diversity. We also differ in how we interpret Scripture.” He noted that 28 different Mennonite groups cooperate in Mennonite Disaster Service, which is “focussed on being the hands and feet of Jesus,” so differences are not an issue.

Gerry Binnema of Black Creek United Mennonite Church said there is a “beautiful diversity in how we interpret Scripture and how God speaks to each of us. We have a fear of diversity because we long to be united.”

When Pries asked, “Can we learn to disagree well?” one voice from the back of the room quipped, “It’s called marriage!”

The morning sessions on dealing with diversity and discord were planned to address possible difficulties with several items on the afternoon business agenda.

The Faith and Life pages may have been the most scrutinized item in the entire report booklet, even though that committee has not met in the past year and did not present an official report. The one remaining committee member, Artur Bergen, submitted a document cautioning against heresy and false teachings in the church. An explanation in the preamble to Bergen’s document explained that it was “an expression of his ongoing concern with current MC B.C. leadership.”

The MC B.C. Leadership Board chose to include Bergen’s document to “be considered by the entire MC B.C. membership in a thoughtful and reconciliatory manner embracing the love the God.”

Resolutions No. 3 and 4 submitted by Reece Friesen—the former calling for a review of Garry Janzen, the executive minister; the latter calling for a review of the executive committee—also generated much discussion. MC B.C. leadership decided to include these resolutions in order to facilitate an open and transparent discussion on issues that various congregations have brought forward to the Leadership Board. Some churches had expressed concern that these resolutions did not conform to MC B.C. organizational procedures. The wording “perceived misalignment in expressed theology and practice” in both resolutions was questioned by some delegates who wondered what this meant.

The resolutions outlined a specific review process, which several people felt was flawed. Others commented that these were personnel issues and should not be discussed in a general meeting.

In the end, after Resolution No. 3 was defeated, Friesen, an associate pastor of Eben-Ezer Mennonite Church, apologized for the “awkwardness of the wording” and withdrew Resolution No. 4. “I want us to be healthy,” he explained, adding, “We have to find a way to hold each other accountable.” 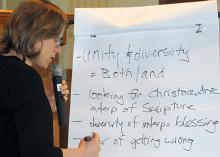 Betty Pries, resource person at the 2018 MC B.C. annual gathering, notes issues of unity and disunity identified by delegates in a session on addressing discord in the church. (Photo by Amy Dueckman)

The report on the MCBC AGM is not accurate. By omission, nowhere does the article interview or quote members of MCBC, in good standing, who have raised concerns about the competency and theological soundness of the Executive Minister and MCBC Chair. Nowhere does the article allow readers of the Canadian Mennonite to ascertain what the issues are as outlined in the report by the lone member of the Faith and Life Committee. Nowhere does the article shed light on why the former chair of the Faith and Life Committee was asked to write a rebuttal by the MCBC executive. Members of the Canadian Mennonite were present and failed to engage in conversation and listening with those who had raised concerns. Nowhere does the article indicate that the motions put forward by Reece Friesen were at the behest of a congregation, and that commission was by consensus of the leadership board of that congregation after having met with the executive minister. For these reasons, I hereby witness to you that the article is not truthful.