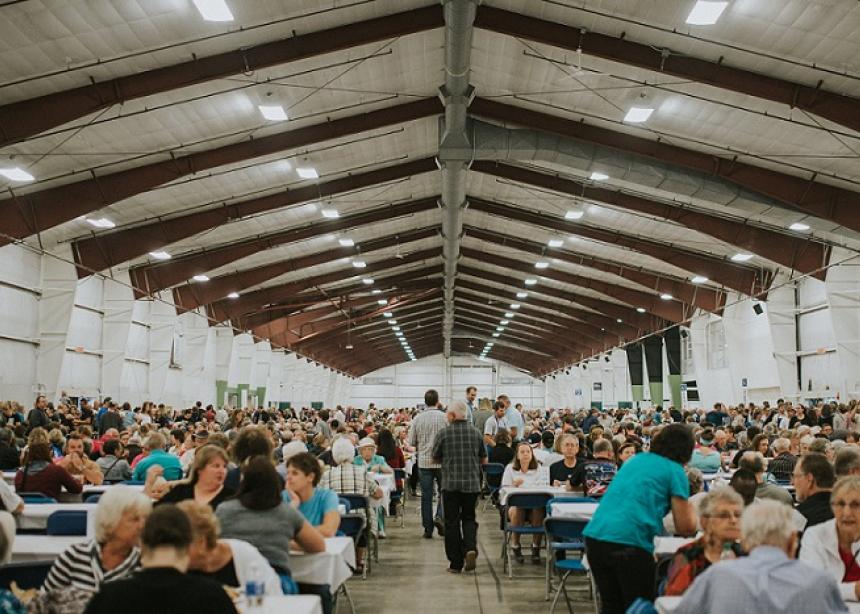 More than 20,000 people attended the annual MCC British Columbia Festival for World Relief on Sept. 14 and 15, 2018, at the Abbotsford Tradex, which raised more than $1 million to support uprooted and vulnerable people locally and around the world. (MCC B.C. photo)

The annual Bread of Life auction, which raises funds for food security projects, contributed in excess of $230,000 to the festival’s fundraising total. This year these donations will support food security projects in Democratic Republic of Congo, which is assisting some of the 1.4 million people displaced by the conflict in the country’s northeast region.

More than a hundred riders of all ages and abilities took part in Pedalling for Hope cyclathon, which raised more than $220,000 in support of internally displaced people in Syria. The cyclathon funds will support a project assisting 6,000 affected households.

The remaining funds that contributed to the $1 million-plus total were raised through food, craft and booth sales, as well as other fundraising efforts held at the two-day festival, and will support MCC’s work with uprooted and vulnerable people in B.C. and around the world!

“The Festival has such a rich history and it’s always encouraging to see many volunteers working to make it happen,” says Wayne Bremner, executive director of MCC B.C. “It’s a reflection of the generosity of our volunteers and donors, as well as the community here in the Fraser Valley. We are honoured that MCC continues to be trusted to help people who are facing conflict, poverty, and disasters. For all of this we are grateful.”

More than 800 volunteers helped cook and serve a variety of foods, from Mennonite classics like farmers sausage and vereneki to international flavours from some of the 56 countries where MCC is currently engaged in relief, development, and peacemaking work. In addition, volunteers managed craft booths, live auctions, a children’s area and more.

More than 20,000 people attended the annual MCC British Columbia Festival for World Relief on Sept. 14 and 15, 2018, at the Abbotsford Tradex, which raised more than $1 million to support uprooted and vulnerable people locally and around the world. (MCC B.C. photo)