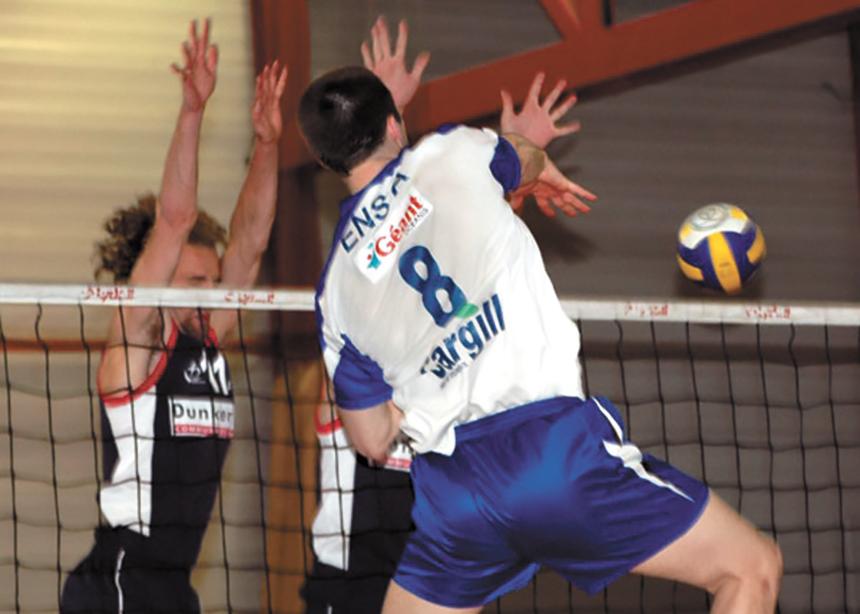 Winning awards is nothing new for Adam Ens. Maybe that’s why he expressed surprise when his whole family planned to show up for his induction into the Canada West Hall of Fame.

The induction ceremony took place on Feb. 8 at the University of Saskatchewan, where Ens played with the Huskies men’s volleyball team from 1999 to 2004.

According to its website, the Canada West Hall of Fame was “established in 2019 to highlight excellence in university sport across British Columbia, Alberta, Saskatchewan and Manitoba.”

During Ens’s five seasons with the team, the Huskies won conference titles three times. In 2004, he and his teammates won the Canadian Interuniversity Sport (CIS) gold medal. Ens himself scored the winning point in what the Canada West website calls “a marathon five-set triumph over the University of Alberta.”

He was also a four-time winner of All-Canadian academic awards for his achievements in the classroom, where he earned degrees in both science and education.

Ens knows first hand that it’s not always easy living out one’s faith in the world of sports. “Some sports get violent,” he says. “That was one of the reasons why I was in volleyball rather than other [sports].”

But even on the volleyball court, being around players who didn’t share his faith could be challenging at times. “It took me a lot of years to be okay with the fact that I was different,” he admits.

Wanting to enjoy the camaraderie of the team, but still wanting to be faithful to Christ, can be “a hard line for a lot of Christian athletes,” he says. “Knowing where to draw the line is not an easy thing.”

Team members have to have a close bond with one another, Ens says, adding, “If you’re not pulling in the same direction, it’s hard.” But, he adds, pulling with the team “can pull you away from good choices that support faithful living.”

Ens knows what he’s talking about. Following his stellar university career, he played professional volleyball in France for two seasons.

“At the highest level [it’s] everything for the team, every day of the week,” he says. “It’s a different mentality when there’s money involved. When it’s their job and contracts are short-term, they’re always wanting to play for the contract.”

The experience of playing professionally was both good and bad for Ens, but as he and his wife Sara were having their first child, they decided to return to Canada.

Ens now lives in Rosthern, where he is a teacher and athletic director at Rosthern Junior College.

In some ways, he says, it was easier to be an athlete himself than it is to watch his three children play sports. As a parent and coach, he tries to strike a balance between competitiveness and learning.

“I’m a competitive person,” he says. “I like to win.” And he knows that winning is important for his players, too. “It can be tough as a young athlete to stay motivated when you lose consistently,” he concedes.

But as a coach, he says, “I’m more happy with seeing development in players than with players who have won.”

Ultimately, what Ens wants his players and his children to learn are the timeworn but still meaningful values of good sportsmanship. He says values like “being respectful of all those around you, learning how to learn, determination [and] teamwork,” in the end, have even greater value than winning. 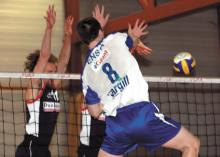 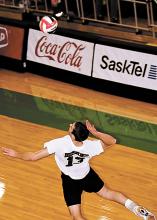 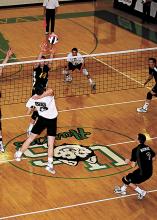 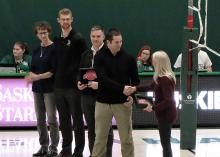 Adam Ens shakes hands with a Canada West representative as he is inducted into the Canada West Hall of Fame at the University of Saskatchewan. (Photo by Henry Harms)