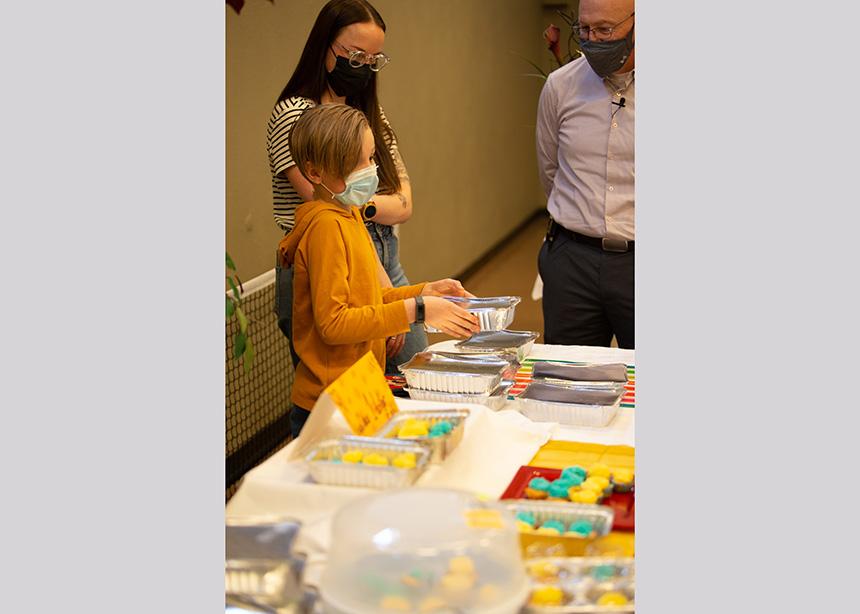 Cliff Gusztak with his mom Ashley hand over baked goods at his bake sale at Foothills Mennonite Church on March 27. (Photo by Jessica Evans)

Cliff Gusztak is a little boy with a big heart. An idea for a small cupcake stand evolved into a fundraising campaign that raised a total of $7,150 for Mennonite Central Committee’s Ukraine emergency response.

“I was maybe thinking that we could stop the war,” he said innocently but sincerely of his efforts.

The nine-year-old, who attends Foothills Mennonite Church in Calgary, recently learned from his parents that he is more than half-Ukrainian. He also learned that he had relatives who had to flee the conflict, refugees the family is planning on supporting to come to Canada.

“That just made me really sad and the whole idea just popped into my head,” said Cliff. “Then dad got involved and it turned into something bigger.”

Cliff’s dad is a chef at one of Calgary’s highly rated restaurants, NOtaBLE. Together, father and son baked 800 mini cupcakes for the bake sale.

“Dad did the baking and I put the dough in and put the icing on top,” said Cliff excitedly.

With many family members and friends in different provinces, Cliff’s mom Ashley started a GoFundMe fundraiser so people could contribute from afar. The total from the GoFundMe campaign was $2,577 of their $5,000 goal.

Cliff and his mom reached out to friends from Sunday school and their families, as well as church members. The call-out resulted in approximately six tables displaying baked goods.

The bake sale was held on March 27 at Foothills, after the morning service. The basement was bustling with buyers and, along with Cliff’s cupcakes, there were cookies, pies, candy boxes and even handmade keychains of the Ukrainian flag.

During the event, Cliff stood proudly behind his cupcake table talking to buyers about his story and dream behind the event, while attendees dropped cash and coins into a large jar. Cliff was excited to be able to hand the jar over to MCC representatives himself.

Linda Dickinson, material resources coordinator for MCC Alberta, was in attendance at the event. She explained how the donations will be used:“We have 12 partners in Ukraine and we are supporting them with money. They are still on the ground doing the work they were doing. It may have changed in scope or ability, but the work is ongoing.”

MCC has approved several smaller-scale, emergency-response projects as it makes plans for longer-term work. These projects include providing lodging, meals, basic medications, fuel and food items for internally displaced people in the city of Uman and in the Cherkasy region.

An MCC partner is delivering food baskets to the homes of individuals with disabilities in the city of Zaporizhzhia. In the city of Avdilvka, an MCC partner is providing families that are sheltering in place with enough food and funds to cover basic needs for two weeks.

Another partner is developing plans to support members of the Roma community displaced from Eastern Ukraine. The effort will include emergency shelter; water, sanitation and hygiene products; and food needs, as well as informal education and children’s programming.

MCC is also developing a response that is longer-term, including psychosocial support, trauma healing, temporary housing, and distribution of locally purchased supplies such as blankets and food packages. MCC also plans to resume shipments of material resources once in-country conditions are stable enough.

“This idea started as a little cupcake stand in our front yard, to being a community event that could not have happened without the help from our church, all Cliff’s Sunday school friends and families, and from everyone that donated to his GoFundMe,” said Ashley. “Thank you for making a boy’s big dream a reality and for showing him that his ideas do make a difference, and that he can help people who truly need it right now.” 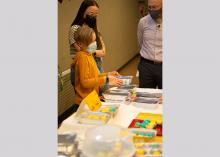 Cliff Gusztak with his mom Ashley hand over baked goods at his bake sale at Foothills Mennonite Church on March 27. (Photo by Jessica Evans)