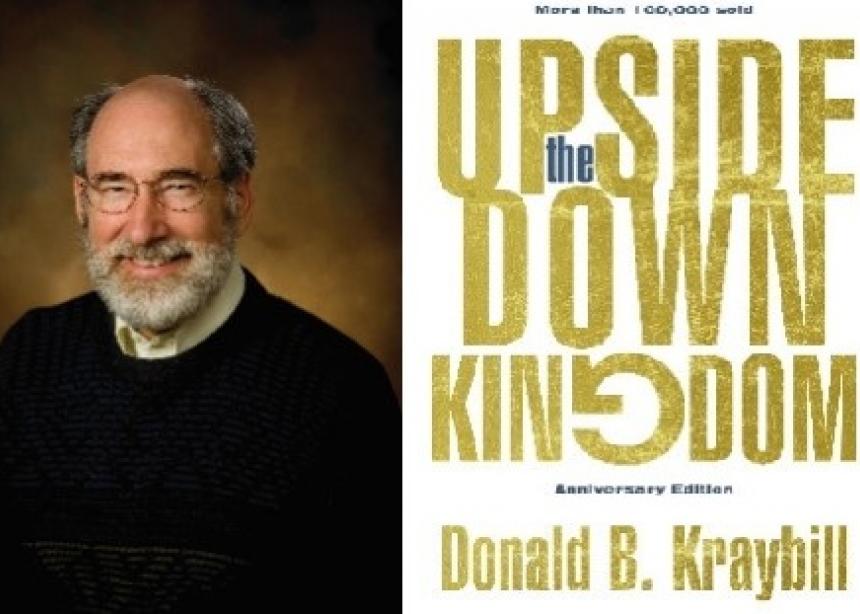 Donald B. Kraybill is the author of the award-winning book, The Upside-Down Kingdom.

In Donald B. Kraybill’s The Upside-Down Kingdom, Jesus is slightly irreverent. He critiques the rich, scorches nationalism, redefines Old Testament law, and undercuts the authority of religious leaders.

Kraybill points out that Jesus is into sharing, not hoarding. Service, not status. Community, not competition. Basins, not swords. Loyalty to God, not nation.

Kraybill, a prolific author and sought-after spokesperson on all things Mennonite and Amish, says that people who follow Jesus “embody the life-giving reign of God amid cultures bent on violence, destruction, and death.”

In this anniversary edition of the classic book The Upside-Down Kingdom, released recently by Herald Press, Kraybill calls readers to imagine and embody the reign of God on earth “as it is in heaven.” Since its initial publication in 1978, The Upside-Down Kingdom has become a trusted resource on radical Christian discipleship. It won the National Religious Book Award in 1979.

The book has sold more than 100,000 copies and been translated into seven languages. In this edition, the author updated interpretations of parables and added cultural context and connections to current events. Lisa Sharon Harper, author of The Very Good Gospel, has written a new foreword. New discussion questions have been added.

Kraybill is internationally recognized for his scholarship on Anabaptist groups. His books, research, and commentary have been featured in national and worldwide media, including The New York Times, Washington Post, The Guardian, NPR, CNN, and NBC. He is distinguished college professor and senior fellow emeritus at the Young Center for Anabaptist and Pietist Studies at Elizabethtown College. Kraybill is the author, co-author, and editor of many books, including Amish Grace and The Riddle of Amish Culture.

“There are many books on Jesus, each with a different spin on his story,” says Kraybill. “In The Upside-Down Kingdom, I have accented the provocative and perplexing upside-downness of the life and teaching of Jesus. My slant reflects my interests as a sociologist and an Anabaptist Christian.”

Donald B. Kraybill is the author of the award-winning book, The Upside-Down Kingdom.