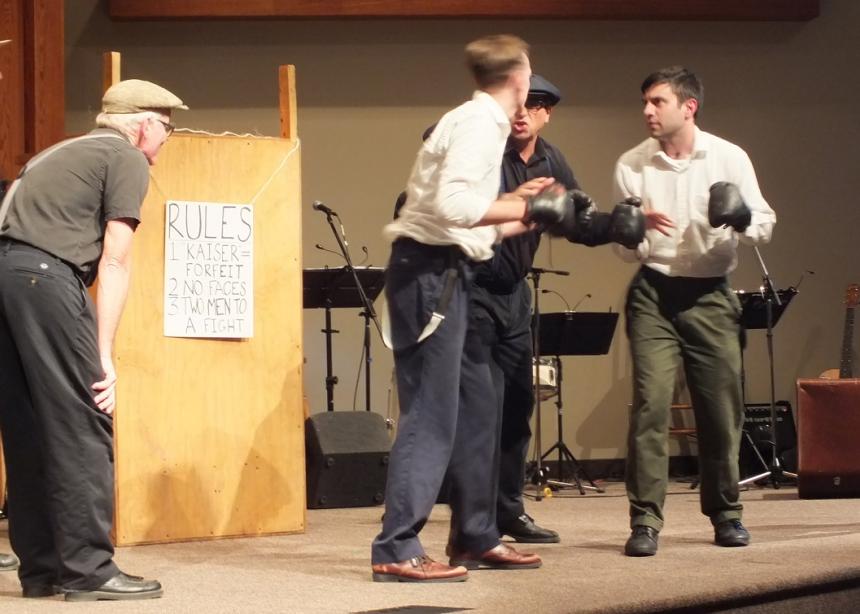 Although the conscientious objectors were pacifists, they organized boxing matches at the alternative service camps. Here Alvin Bender (played by Johnny Wideman) spars with Rudy Enns (played by Ben Wert), while member of the band Jim Bender (far left) fills in as a bystander. (Photo by Barb Draper)

Glenn Martin’s voice was deep with emotion as he expressed appreciation for Yellow Bellies, a drama that describes the experiences of Mennonite conscientious objectors (COs) during the Second World War.

During the talk-back time after the evening performance, Martin explained that his father had been a CO, serving at Montreal River Alternative Service Camp in the 1940s, but he never told his family much about his experiences. One thing his father did say was that the only bathtub the men had was Lake Superior. Martin found the drama very powerful because he finally had a better insight into his father’s life.

This and other responses showed that the audience had been deeply moved by the play, which not only illustrated the difficult working conditions, but also the anger and resentment of those who believed that COs were cowards, shirking their duty to their country. Especially at Montreal River, the work was tedious and seemed pointless, resulting in frustration. One of the characters, whose brother chose to serve in the air force, constantly asks himself if he made the right choice.

Playwrights Johnny Wideman and Rebecca Steiner did extensive research at the Mennonite Archives of Ontario in Waterloo and the Mennonite Heritage Centre Archives in Winnipeg. Significant parts of the dialogue were taken verbatim from interviews, letters, memoirs and newspaper articles of the day.

After the afternoon performance, 94-year-old Clarence Heintz, one of the few surviving COs, mentioned some of his experiences at Montreal River, affirming the stories told by the play.

The effectiveness of Yellow Bellies could be seen as people lingered in conversation afterward. And the buzz of conversation continued the next morning at Floradale Mennonite Church, as people reflected on what they had learned and as they talked about their fathers’ experiences during the war.

The audience also appreciated the live music provided by No Discernible Key. The songs provided transition from one scene to another and were carefully chosen to represent what COs would have been singing at the time. Band members also used their instruments to create interesting sound effects, including a train whistle, brakes, pattering rain and firebomb explosions.

Many thanks to Theatre of the Beat for providing this insight into the Mennonite life of a couple generations ago. As the play pointed out, the Mennonite church was forever changed, as so many young men spent time away from their sheltered world, meeting other types of Mennonites and seeing the complexity of the larger world. The audience was clearly left with the question of what would happen if Canada made military conscription compulsory again.

See “Contradicting the status quo” for background on the play Yellow Bellies.

Although the conscientious objectors were pacifists, they organized boxing matches at the alternative service camps. Here Alvin Bender (played by Johnny Wideman) spars with Rudy Enns (played by Ben Wert), while member of the band Jim Bender (far left) fills in as a bystander. (Photo by Barb Draper)

Alvin Bender (played by Johnny Wideman) is devastated to find that Mary Lichty (played by Kim Walker) is more interested in a man in a uniform than a conscientious objector. (Photo by Barb Draper)