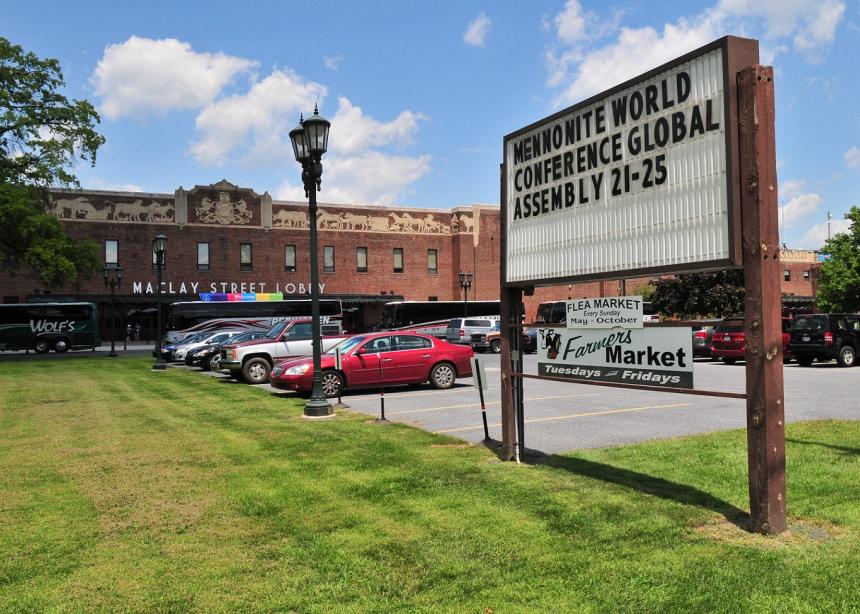 Would the attendees of Pennsylvania 2015 accept “an occasional farm smell” in their meeting space? That’s just one of the many questions Howard Good, national coordinator of PA 2015, asked as he and his team evaluated the Pennsylvania Farm Show Complex in Harrisburg, Pennsylvania, U.S.A., as a potential location for the next Mennonite World Conference assembly.

After considering an extensive feasibility study, the MWC executive committee elected in May 2011 to hold the 16th Assembly in the U.S., specifically at the Farm Show Complex. The venue, built in the 1930s, was created to showcase agriculture.

The Farm Show routinely hosts events that draw a large crowd. But with more than 7,500 participants representing 65 countries, PA 2015 was on a larger on scale than any other events they’ve done internationally, says Sharon Altland, executive director of the Farm Show Complex.

The decision to make PA 2015 a “green” event set a precedent for the facility. They have made smaller-scale efforts at environmental stewardship in the past, such as installing a windmill and recycling bins, said Altland, but this was the first event where they were asked to make the smallest environmental footprint possible.

Good and his team set down green baselines for PA 2015. No plastic bottles would be sold at the event. Instead, each PA 2015 registrant received an aluminum water bottle. Water stations were set up for refilling the bottles within the buildings, which cover 24 acres under roof. Shuttle buses were provided to cut down on car traffic to and from hotels and the nearby Mennonite communities.

The biggest endeavor was the capturing of all food waste and turning it into compost. The Farm Show buildings use solar collectors, solar panels, water reclamation tanks, vending misers, and low-flow water fixtures, among other energy-saving projects. But the Complex has not focused on capturing food waste, until now.

During PA 2015 containers were provided in the dining areas where diners deposited their food waste, paper plates, disposable drinking glasses and cutlery. All of these were hauled to a facility outfitted to convert them into compost within a three-month period.

Hannah Smith-Brubaker, deputy secretary of agriculture for Pennsylvania, expressed her appreciation to Assembly attendees on July 23 “for your commitment to demonstrating Mennonite stewardship . . . and to reducing food waste.

“We promise to pass this on by following your lead, your example, and doing a better job ourselves at . . . reducing food waste in this facility,” she said.

It has been an all-around different event for the Farm Show. Jimmie Carter, a staffer at one of the food stalls outside the large arena, noted that PA 2015 was less busy than during agricultural shows, when lineups of hungry patrons run halfway down the hall.

Yet he was glad to work at the event. “We enjoy that music,” he said of the international ensemble that led worship for morning and evening plenaries. “Never change that music!”

Devin Manzullo-Thomas is editor of Courier/Correo/Courrier, the magazine of Mennonite World Conference. 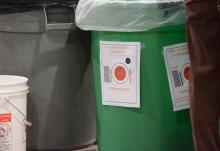 Dining areas at PA 2015 had collection areas and volunteers to encourage diners to compost as much as possible. (Photo by Dale D. Gehman)