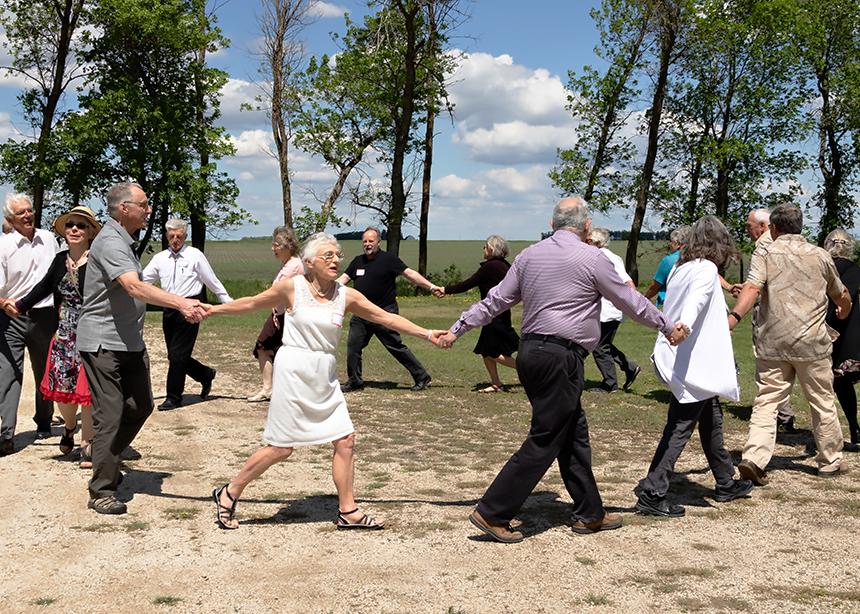 Church members brought back the circle games they used to play at weddings and church events when they were young. (Photo by Rick Friesen)

While many churches in rural Canada face closure, Arnaud Mennonite Church recently celebrated its 75th anniversary. Located in the prairie town of Arnaud, Man., the church is home to a wide range of ages, from young families with children to seniors. Although about 40 people regularly attend Sunday morning worship, over 150 people gathered on June 9 to celebrate the church’s birthday, reminisce and reconnect with old friends.

The day began with a worship service. The church rang with the harmonies of a mass choir, a feature that was a regular part of weekly worship in the past.

Children crowded around Phyllis Wiebe for a children’s story. Wiebe often did the children’s story when her husband Dave, who has since passed away, was Arnaud Mennonite’s first hired pastor in 1977. Seven former pastors participated in the morning worship and afternoon sharing.

After lunch, young and old participated in church picnic activities, competing to eat food with no hands, put books of the Bible in order and play tug of war. Some of the older generation even revived the circle games they used to play at weddings and church events when they were young.

The day concluded with open mic sharing. One highlight was sharing memories of a rich tradition of music in the church.

Harold Penner, congregational co-chair, in an interview, said that many skilled musicians have come from this church, including well-known composer and conductor Leonard Enns, organist Lottie Enns-Braun and pianist Wilma Poetker, among many others.

Another common thread identified in the open mic time was the outstretched hands of the church’s members. “I think we’ve also been known as a really caring church in the community,” said Penner. Whenever people were in trouble, church members “rallied around and helped out,” like harvesting a family’s crops when they experienced a death in the family. “That’s something that actually still continues, because we do care about each other and really try to help each other.”

Many members of the church have also been heavily involved in a Canadian Foodgrains Bank growing project, called HOPE (Helping Other People Eat). As a community project, they work with individuals from different backgrounds in their community to help others around the world have enough food to eat.

Penner said the church has faced its share of challenges over the years, like every other church does, but that the bigger challenges are occurring now.

“The declining numbers in our congregation is a challenge, which has mostly to do with rural depopulation—bigger farms, smaller families, and so on,” he said.

For many years the church rested comfortably at about 100 regular attendees. But at the start of the new millennium, the numbers in the pews on Sunday morning began to decline.

“We see churches closing in rural Canada, it’s not like we don’t realize that could also happen to us,” Penner said. “But at this point we’re not entertaining that option. We have a group right now that still sees ourselves continuing and we hope we can do that.” 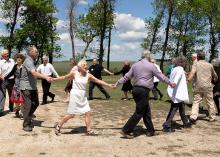 Church members brought back the circle games they used to play at weddings and church events when they were young. (Photo by Rick Friesen) 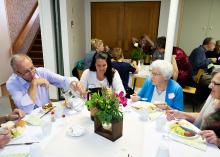 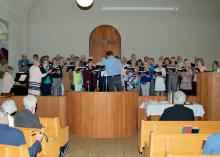 Past and present members of Arnaud Mennonite Church revived the church choir, a feature that was a regular part of weekly worship in the past. (Photo by Rick Friesen) 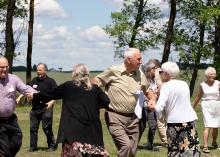 The old circle games reminded participants of their youth. (Photo by Rick Friesen) 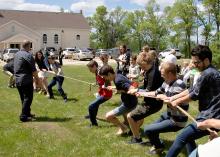 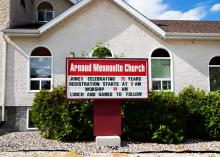