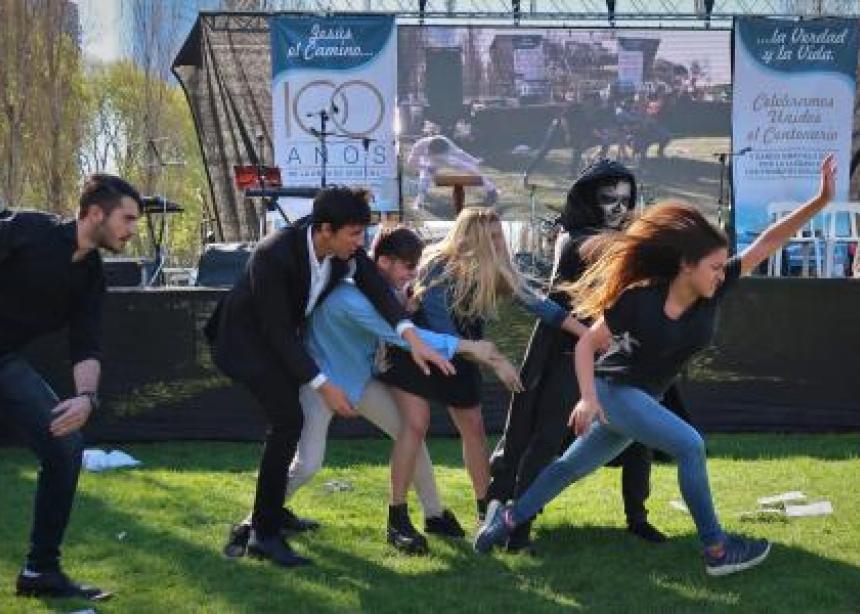 Performing before hundreds of Mennonites and passersby at a park in downtown Buenos Aires, a drama troupe from the Mennonite church in Villa Adelina, Argentina, mimed challenges and struggles facing youth: violence, drugs, promiscuity, greed, and death itself. Representing Argentinian youth, actor Laura Burgos sometimes seemed mesmerized as actors impersonated threats, but she also sought to escape their grasp. A Christ figure in white, played by Diego Gonzalez, rescued her from malice, and came alongside to teach elegant dance steps.

Performed in September 2017, the drama was part of a festive three-hour event in Buenos Aires at Puerto Madero, where the first North American Mennonite missionaries arrived in 1917. The gathering featured large-screen videos, children’s programing, special music, poetry, preaching and greetings from other denominations.

Repeatedly Argentinian church leaders underscored three distinctives of Anabaptist witness: Christ is the centre of our faith, community is the centre of our lives, reconciliation is the centre of our work. Also evident were twin themes of empowerment by the Holy Spirit and commitment to mission. A charismatic movement that swept through Argentina in the 1970s and ’80s still energizes Mennonites of all ages.

Mennonites of Argentina honour the early missionaries who sacrificed much to come to their country. But the focus of today’s church is on current and future mission. Mennonites have divided the country into four regions, with mission strategies and church planting for each area, and the church is growing.

As the weekend of centennial festivities came to an end, several hundred church members from across the country sang toward the future God has for them: “Muévase potente, la iglesia de Dios.” (Move with strength, O church of God.)