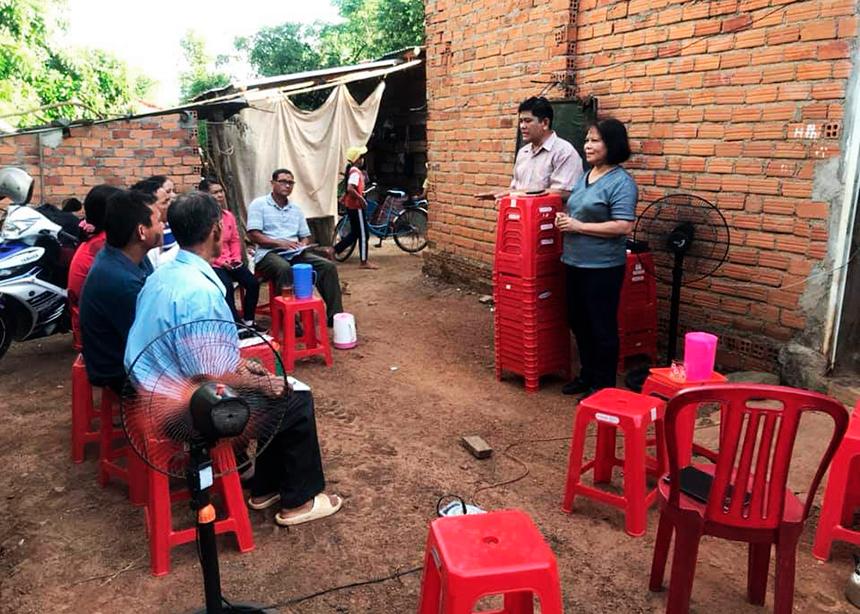 In Vietnam it is still uncommon to see female pastors. But the president of the Evangelical Vietnamese Mennonite Church (EVMC) is a woman and also a pastor. Reverend Hong Thi Nguyen is the leader of 40 Mennonite congregations throughout the southern part of Vietnam.

After completing a degree in civil engineering, she married and started a family. Then tragedy struck. Her husband of 10 years died suddenly and her friends abandoned her. “When there was lots of money, there were lots of people around, but then, when we were in trouble, no one helped us, and I wanted to kill myself,” she says.

But an older friend, who could see she was in distress, invited Nguyen to stay at her home and she comforted her. It was this friend who shared some reading material with her, encouraging her to confess, believe and pray to Jesus.

One night she had a dream, saying, “I saw evil hands grabbing for me and I prayed for Christ’s protection. I felt God’s personal touch. Then I knew he was real, and my faith grew from there.”

Nguyen then sold her little house and opened a restaurant. She also decided to start a small church in the community. Eventually, she had to close the restaurant, but the church continued to support her family. During that time, she wondered what plan God had for her life.

Then one Sunday, when she was visiting another church, a young woman greeted her at the door and blurted out, “Are you a pastor’s wife?” The young woman then shared with Nguyen how God had given her a prophetic word that she was going to welcome a pastor to the church and she felt that person was her. Since women were not usually pastors, she wondered if Nguyen was a pastor’s wife. Nguyen pondered this in her heart.

On another Sunday, while visiting a different church, a woman approached her out of the blue and said, “God told me that you should serve the Lord.”

Nguyen’s final experience and call came at a conference at which a woman preacher taught about the baptism of the Holy Spirit. It was in Nguyen’s private time of prayer that the Holy Spirit fell on her and she accepted the call. It was not easy, she says.

“There were a lot of difficulties serving as a female pastor, but I have spiritual mentors in my life that help me to stay strong,” she says. “Every time I have difficulties, God opens a door.”

Nguyen has four daughters and one son, who passed away at the age of 34 due to a tumour. Her son was midway through his master’s degree to become a pastor when he was given a month to live.

“It was losing my only son that gave me the strength to be president of EVMC,” she says. “God miraculously helped me to overcome my sadness and bitterness. I found my faith getting stronger and stronger.”

As EVMC’s president, she travels throughout the country with other leaders to give Bible training. She is currently finishing up a teaching tour that began on May 15 and ended in July in Ho Chi Min City (Saigon), her hometown.

During a session in Daklak, 10 pastors with local leaders attended to worship, pray, and learn together. They also distributed bags of rice to those who are struggling due to COVID-19. Donations were given through the Vietnamese Mennonite churches in Canada.

According to Nguyen, the trainers were especially encouraged, seeing the training as beneficial, as “leaders were reminded that they had not joined a religion, but had entered into the experience of a personal relationship with God.”

According to Nguyen, EVMC is different from other Christian denominations in Vietnam in many ways. “We are centred on Jesus,” she says. “Also, one thing that is special about Mennonites in Vietnam is that we only submit to the authorities if it lines up with the Bible. In other words, if we are asked to do something contrary to Scripture, we will obey God and not man.”

Mennonite missionaries with the U.S.-based Eastern Mennonite Missions began ministry in Vietnam in 1957. By 1975, there were more than 100 Mennonites meeting in Saigon. There are now two Mennonite denominations in Vietnam: the Mennonite Vietnamese Church, which is registered with the government and a member of Mennonite World Conference, and EVMC, which is currently unregistered. 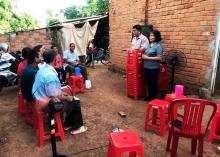 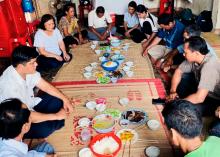 Mennonite pastors and leaders share a meal at training conference in Daklak, Vietnam, in June. (Photo courtesy of Nhien Pham) 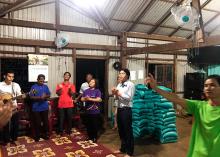 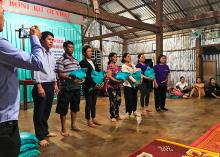 Vietnamese Mennonite pastors, including Hong Thi Nguyen, right, receive bags of rice to distribute to those in need due to COVID-19. (Photo courtesy of Nhien Pham) 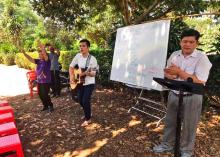 Hong Thi Nguyen, with arms raised; Y Ya, on guitar; and Hieu Do, right, lead worship at a teaching conference in Daklak, Vietnam, in June. (Photo courtesy of Nhien Pham) 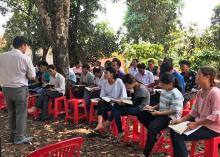