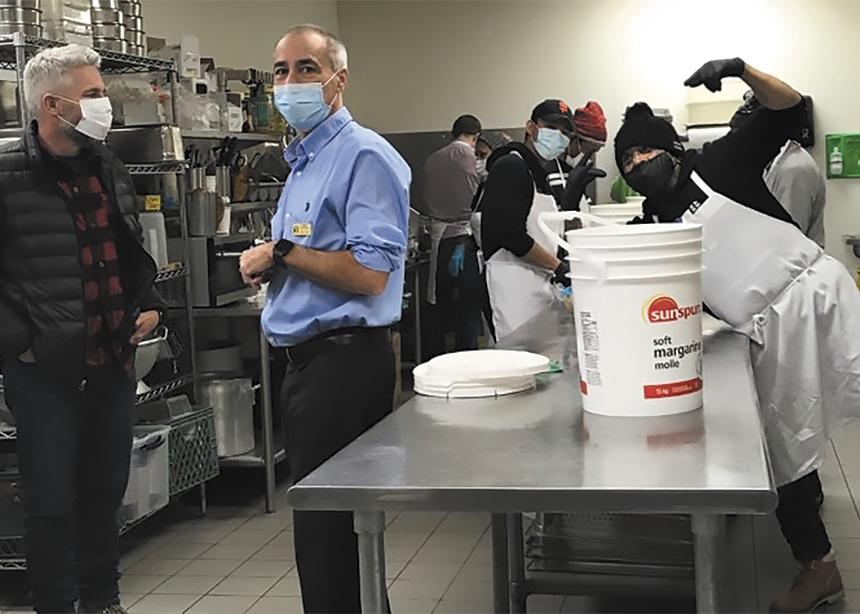 When the missions and service ministry team at Mount Royal Mennonite Church in Saskatoon was trying to identify a giving project the congregation could rally behind, it thought of the Friendship Inn.

Saskatoon’s Friendship Inn provides hot meals twice daily to the city’s most vulnerable people. The non-profit organization relies heavily on volunteer labour to prepare and serve the meals. But the COVID-19 pandemic had reduced their volunteer work force by about 75 percent.

When Wilf Funk contacted the Friendship Inn to ask how Mount Royal could help, staff suggested the Inn could really use an automatic potato peeler, because, with fewer volunteers, it had to rely on paid staff to peel potatoes.

Wilf understood. He and his wife Cheryl had been part of a group of eight regular volunteers at the Inn who volunteered every Sunday for a period of time. “We peeled a lot of potatoes,” he says.

But a commercial potato peeler was not small potatoes in terms of cost. The price tag was around $7,500.

The ministry team had heard that Mennonite Disaster Service (MDS) was providing grants to organizations negatively impacted by COVID-19, so it started its fundraising efforts by applying for a grant.

Claire Ewert Fisher, who is the church’s co-pastor, says the grant deadline had already passed by the time Mount Royal contacted MDS, but when she explained what the church wanted to raise funds for, she was told to write a proposal and to ask for twice what she hoped to receive. She did, and Mount Royal got a $2,000 grant.

The church dubbed its fundraising campaign Project Potato Peeler. The Funks canvassed businesses and Ewert Fisher approached other Mennonite churches in Saskatoon and area. Donations started coming in and the momentum grew.

“The response was absolutely great,” says Wilf. “It seemed like everybody we spoke with was generous.” In addition to smaller donations from church members, the ministry team also received sizeable gifts from a number of corporate donors.

“We had no idea it was going to snowball into this rallying point,” says Laura Herman, who is the Friendship Inn’s development and engagement manager. She notes that what began as an $8,000 fundraising goal snowballed into a much larger gift of about $40,000.

“We’re not just getting one piece of equipment,” says operations manager Bob Wyma. All together, the funds raised will enable the Inn to purchase the potato peeler, a commercial salad spinner, food processor and coffee machine. “When we told the staff, it was like Christmas down there,” he adds.

The new equipment will make meal preparation easier for staff and volunteers alike. And Herman says it will free volunteers to do other tasks, including the extra cleaning and sanitizing required by COVID-19 regulations.

Herman says that having the potato peeler will also free volunteers “to have a conversation, even a brief one, with guests as they’re being served, [and not have to] feel pressure to get back to the kitchen to peel potatoes.”

Friendship Inn serves about 500 meals every day, says Wyma. While the pandemic has forced it to reduce the capacity of its dining room, it also offers a take-away service. Mealtime is limited to 15 minutes so the Inn can ensure everyone in the lineup gets fed, he says.

“We wouldn’t be able to do the work we do without the support of churches,” says Herman. “There was no dream before Wilf called. They really opened up that ability to dream.”

Ewert Fisher attributes the success of Mount Royal’s fundraising project to the pandemic and the movement of the Holy Spirit. “People realize we’re all vulnerable,” she says. “It’s time for us to check our privilege and do something about it.” She adds, “We have money to share, and we are responsible for many other people, too. It was totally of the Spirit.” 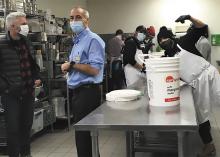