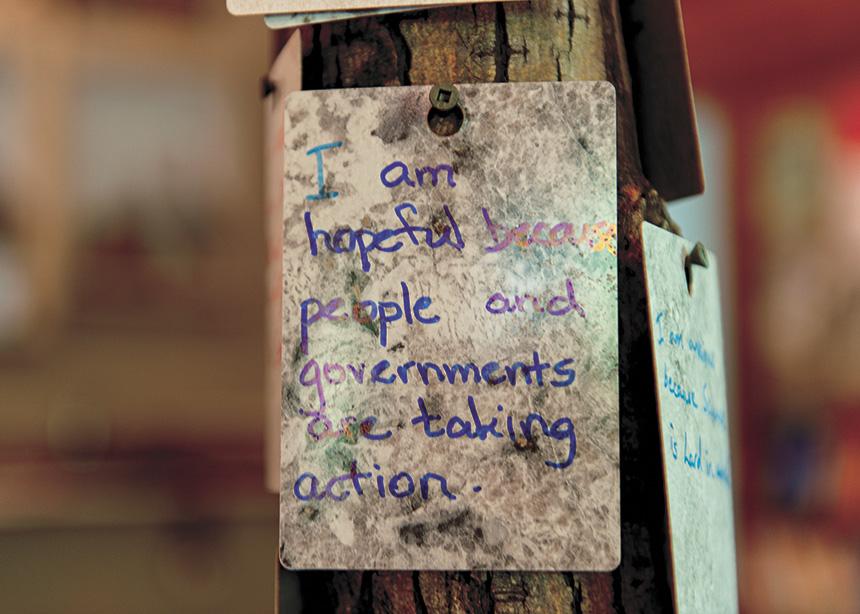 During a retreat addressing climate anxiety MC Saskatchewan youth shared their hopeful feelings about the planet’s future, on tags. (Photo by Emily Summach)

It is true that the impacts of climate change on the planet’s future are unfairly shouldered by youth and children. Mennonite Church Saskatchewan made space for youth to explore that burden together. Seventeen young people attended a day-long retreat, “The Climate is Changing: Now What?” held at the Shekinah Retreat Centre near Waldheim, Sask., in early June.

Zach Dueck, interim youth minister for MC Saskatchewan said planning a retreat around the topic was an easy choice, “At the beginning of the school year some of the youth had been expressing their anxieties surrounding the climate to their youth leaders, and at a MegaMenno event in November we asked the youth to write down some of those anxieties and what they were concerned about to help us better define the topics we were planning to discuss. While we did get some specific questions, the biggest response we noticed was just a general sense of dread. So, it didn’t really feel like it was much of a decision, it was more of a response to what our youth are concerned with right now.”

Brenda and Wayne MacDonald of Wildwood Mennonite Church in Saskatoon were the guest speakers. The MacDonalds were initially surprised by their invitation to speak.

“I don’t have a PhD in this,” laughs Wayne. Yet the timing couldn’t have been more providential.

“I was attending an online event about climate change geared towards women,” said Brenda. “We heard a lot of wonderful speakers and in the last session, in a Zoom breakout room, one of the questions that was posed was, ‘What can we do? What steps can we take?’ and I thought, ‘We can talk about climate change, because avoiding the topic isn’t going to do any good.’ ” That same day, Mennonite Church Saskatchewan contacted the couple about leading a retreat about the topic.

The MacDonalds didn’t expect to solve the problem of climate change in one day. “It’s a one-hundred-cups-of-coffee issue,” laughed Wayne.

They did want to encourage the youth who came. “We wanted to respond to eco-anxiety, and hope that the kids leave with a feeling of empowerment. There are things they can do. Young people have influence,” said Brenda.

As part of the retreat, students were invited to write responses to the questions, “I am anxious because” and “I am hopeful because” in regard to climate change. The response cards were hung on a tree limb display that Wayne had created. The intention was to offer both the anxieties and hopes as prayer to God.

Many of the students had one foot planted on more typical teenage concerns, and the other on the weighty climate concerns. Students stated they were excited to be together in person, spend time outside and play games. The retreat aimed to address both sides by discussing climate issues, playing outdoor Dutch Blitz with a giant deck of cards, and roasting a hot dog lunch around a campfire.

Zoe Schellenberg, a student from Osler Mennonite Church, had this to say: “We’re talking about climate change and anxiety at church and school. It’s the biggest current issue, I think, because we’re the ones to change it. Being out here at Shekinah and nature makes me appreciate it more too. I’m scared about the responsibility, but I’m also hopeful because a lot of people care about climate change. I think it’s good to care more when you’re younger, and to be learning about it now when we’re young. We have more time to accept what’s happening to the environment and to try to change things than someone who’s maybe older.”

Nora Bergen-Braun, also from Osler Mennonite Church, echoed Schellenberg’s thoughts: “I’m feeling a bit panicky about climate change, but it’s good to hear that there are things you can do, and lots of people are doing those things.” 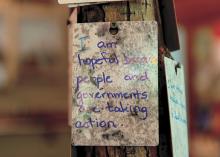 During a retreat addressing climate anxiety MC Saskatchewan youth shared their hopeful feelings about the planet’s future, on tags. (Photo by Emily Summach) 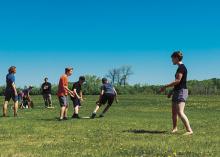 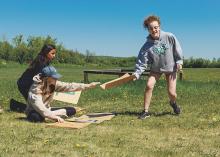 Zoe Schellenberg passes a giant Dutch Blitz card to her friends during a youth retreat. (Photo by Emily Summach)