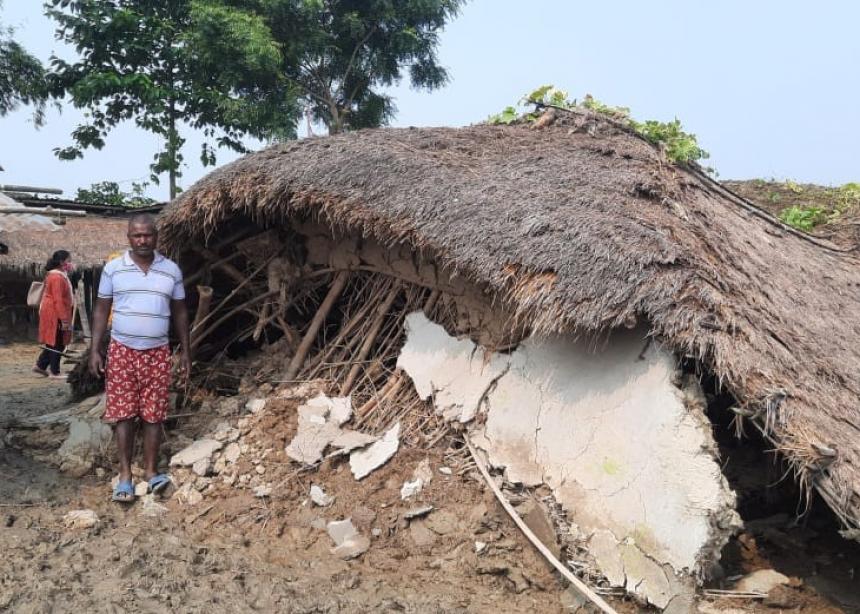 A man stands next to a house destroyed by recent flooding in rural Nepal. (Photo courtesy of Shemlal Hembrom)

As scientists and world leaders met at the COP26 climate conference in Glasgow, Scotland, Anabaptists in Nepal were helping to address the immediate and deadly impacts of the climate emergency.

Shemlal Hembrom, chair of the Brethren in Christ (BIC) Church Nepal, said via email that more than one million people have been affected, and at least 80 percent of the arable land in the region has been destroyed.

“Thousands of houses were inundated,” he said.

Hembrom said of the church response, “Some flood victims were given shelter in the church and some believers who have space surrounding their home in a high place” provided temporary shelter and food to displaced families.

According to Mennonite World Conference (MWC), there are more than 1,000 baptized members and 22 BIC congregations, as well as some house fellowships, in Nepal. Shemlal Hembrom’s wife, Hanna Soren, serves on the MWC Deacon’s Commission.

The BIC church in Nepal dates back to the 1950s, when a missionary from India went to Nepal. Early converts to Christianity faced three to five years in prison under the laws of the time.

When asked if he sees a link between climate change and the flooding, Hembrom said, “Yes, it is very true that the climate change is increasing severe weather,” noting that the monsoon season came late, hitting during the harvest. He also links landslides in hilly areas and drought to climate change.

Nepal ranks 10th on the 2021 Long-Term Climate Risk Index put out by the NGO Germanwatch. The index looks at “loss events” caused by extreme weather between 2000 and 2019.

A 2021 report from the International Red Cross Climate Centre predicts continued significant climate impacts for Nepal: “The already dry winters will be drier, and the wet summer monsoon season will be wetter by a staggering threefold increase (likely). Strong glacial melt will trigger landslides, mud flows and flash floods with increased runoff.”

Poverty in Nepal exacerbates its vulnerability. The country ranks 142 out of 189 nations on the 2020 UN Human Development Index.

Famous as home of the highest peak in the world, Nepal also has low-lying plains to the south. According to the World Bank, roughly 80 percent of Nepal’s 28 million people live in rural areas and nearly 70 percent of the workforce is involved in subsistence agriculture.

Hembrom said that people displaced by the recent flooding are suffering from illnesses due to contaminated drinking water. “Children, women, older people and people with disabilities are particularly vulnerable to disease and food shortages,” he said. The pandemic lockdown compounds the suffering.

Hembrom added that “landless Indigenous people of Nepal are the most vulnerable to the disasters caused by climate change.” He said these communities are often close to the jungle, on riverbanks or roadsides. “Often they build temporary houses made of mud and bamboo with thatched roofs that are vulnerable to disasters such as flood, landslide, storm and fire,” he said. “So very often they are dislocated from one place to different places every three to five years.”

Hembrom said that “supporting such communities can minimize the destruction and also protect the lives of these vulnerable Indigenous, landless people.”

A man stands next to a house destroyed by recent flooding in rural Nepal. (Photo courtesy of Shemlal Hembrom)