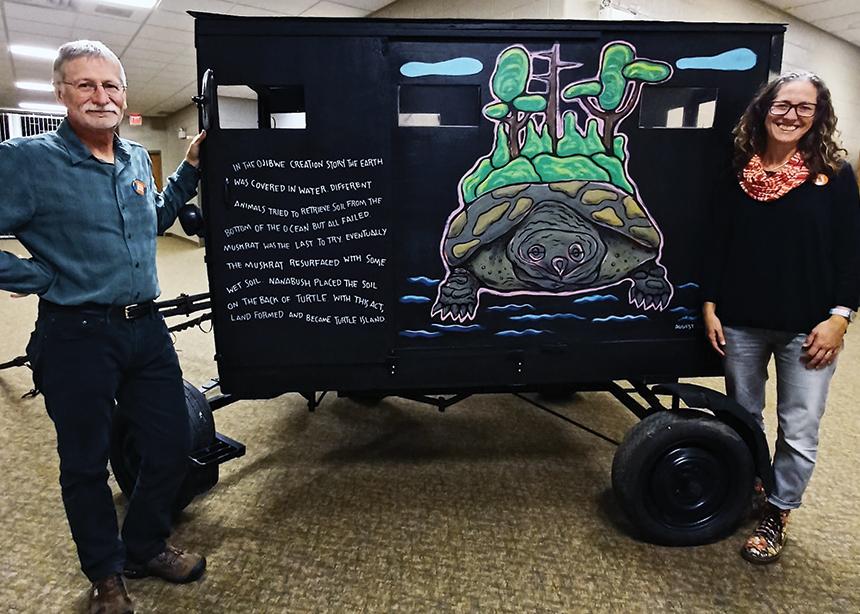 On Sept. 30, the National Day of Truth and Reconciliation, Dave Neufeld and Rebecca Seiling talked about Indigenous history and issues as part of the Amish bicentennial celebrations. This side of “The Landed Buggy” exhibit depicts the Ojibwe creation story. (Photo by Fred Lichti)

Of all the events planned by the Amish bicentennial committee for this fall, the most popular were the hymn sings held at Maple View Mennonite Church near Wellesley, Ont., on Sept. 11, and at East Zorra Mennonite near Tavistock on Sept. 25. Both events had between 200 and 300 people.

“Singing a capella, four-part harmony with a church full of eager singers was for many both nostalgic and soul-nurturing,” said Fred Lichti, one of the planners.

Hoping to appeal to a wide spectrum of people with Amish heritage, including congregations that do not use musical instruments in worship, the hymn sings did not have accompaniment and were led by song leaders from a variety of local congregations.

The one hymn that was not in four-part harmony was “Das Lob Lied” (“The Praise Song”). A song from the 16th century, it is still used in all traditional Amish worship services everywhere. The hymn is sung very slowly, with about three or four notes for each syllable, and each verse takes about five minutes to sing.

The committee found a traditional Amish song leader to teach a core group of about 25 how to sing it the way it is done in Ontario Amish worship services. At the hymn sings participants only sang one verse.

Many people found it difficult to sing that slowly, and Lichti heard the comment, “I am so glad we have given up that style of music.” On the other hand, there were those who found the chant-like singing brought back poignant memories of their childhood.

When the committee began planning, its first decision was which year to commemorate. Although the first Amish families did not migrate from Europe until 1823, the committee chose to keep in step with the sesquicentennial celebrated 50 years ago in 1972. It was in 1822 that Christian Nafziger arrived in Waterloo Region and then returned to Europe, recommending that Amish families settle there.

Another major question for the committee was how to celebrate this settlement story while recognizing that Indigenous Peoples were harmed in the process. Acknowledging Indigenous history became one of its priorities. Stories of Indigenous history were included in the heritage bus tours, and two events focused on the Indigenous story.

On Sept. 30, Canada’s National Day of Truth and Reconciliation, 120 people met at Steinmann Mennonite Church in Baden to hear David G. Neufeld speak on “What stories have we not been telling,” and Rebecca Seiling, Indigenous Neighbours engagement associate for Mennonite Central Committee (MCC) Ontario, speak on “The Landed Buggy,” a buggy decorated to reflect the web of connections between the land, Indigenous people and settlers. The following day, at Crow Shield Lodge, not far from Steinmann Church, an Indigenous awareness workshop was led by Clarence Cachagee.

“By the end of the bicentennial events, I felt that an impact had been made, and there was an increased awareness of Indigenous history and issues,” said Neufeld.

The Thanksgiving worship service on Oct. 2 ended a busy weekend. Focusing on gratitude, the service involved people across a spectrum of Mennonite and Amish congregations. Because of generous sponsorship from local businesses and from the Mennonite Historical Society of Ontario, expenses for the events were covered so that offerings taken at the hymn sings and the Thanksgiving service raised more than $6,000 for MCC to use in refugee and Indigenous Neighbours programs.

Another important part of the Amish bicentennial celebration was the exhibit of artifacts and memorabilia arranged around the perimeter of the large gym at Steinmann Mennonite. This impressive display was open to the public throughout the weekend of Sept. 30 to Oct. 2.

“What began as a fairly simple display of early documents and books kept growing,” said Lichti. “Artifacts and antiques evoke storytelling and, once news got out that we were bringing together such items, donors began calling to offer their artifacts and stories.”

In the end, there were more than 200 items originating from families in the Ontario Amish tradition. Each item was identified and dated along with the donor’s name and other details.

One of the most valuable artifacts was a name plate by Amish folk artist Barbara Ebersol, which was discovered just in time for the exhibit. It was somewhat by chance that someone cleaning out an aunt’s old house mentioned the artwork to Lichti, who recognized its value.

The heritage bus tours were also popular, but space was limited. The half-day bus tours began in Wilmot Township and travelled to townships to the southwest toward Tavistock, with comments about how the community navigated change and assimilation over the years. The noon meal was a traditional Amish Sunday noon communal meal of bean soup, bread, apple butter and cheese.

The “Up the Nith” all-day tour followed the northwest expansion of the community towards Milverton, where the Old Order Amish are located today. The second half of this tour focused on Old Order Amish history and culture. For many of the tour participants, a highlight was the 45-minute visit to a parochial school, where they could observe the students being taught.

In reflecting on these bicentennial celebrations, Lichti wonders whether future generations will have a sense of Amish heritage. “After the Amish Mennonite Conference of Ontario dropped ‘Amish’ from its name in 1963-64, and adopted the name Western Ontario Mennonite Conference, we still thought of ourselves as Amish Mennonites,” he said. But he believes the integration of various Mennonite streams in Ontario has resulted in a loss of Amish identity.

Lichti does not lament this reality, though, saying, “Affirming the diverse and multicultural composition of the congregations of Mennonite Church Eastern Canada is probably more useful for moving into the future which God has for us.” 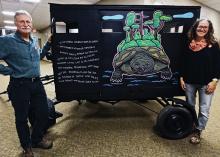 On Sept. 30, the National Day of Truth and Reconciliation, Dave Neufeld and Rebecca Seiling talked about Indigenous history and issues as part of the Amish bicentennial celebrations. This side of “The Landed Buggy” exhibit depicts the Ojibwe creation story. (Photo by Fred Lichti) 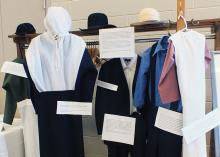 Among the artifacts and memorabilia at Steinmann Mennonite Church was a display of traditional Amish clothes and explanations of how dress changes at different stages of life. (Photo by Barb Draper) 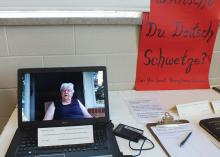 Among the displays was a video with people speaking the German dialect still used in traditional Amish homes. The sign asks, ‘Can you speak Pennsylvania German?’ (Photo by Barb Draper) 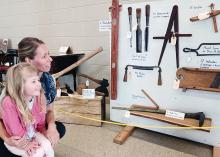 Leah Cressman and her daughter Norah try to figure out what the antique tools are used for at the display of Amish artifacts and memorabilia at Steinmann Mennonite Church. (Photo by Fred Lichti)