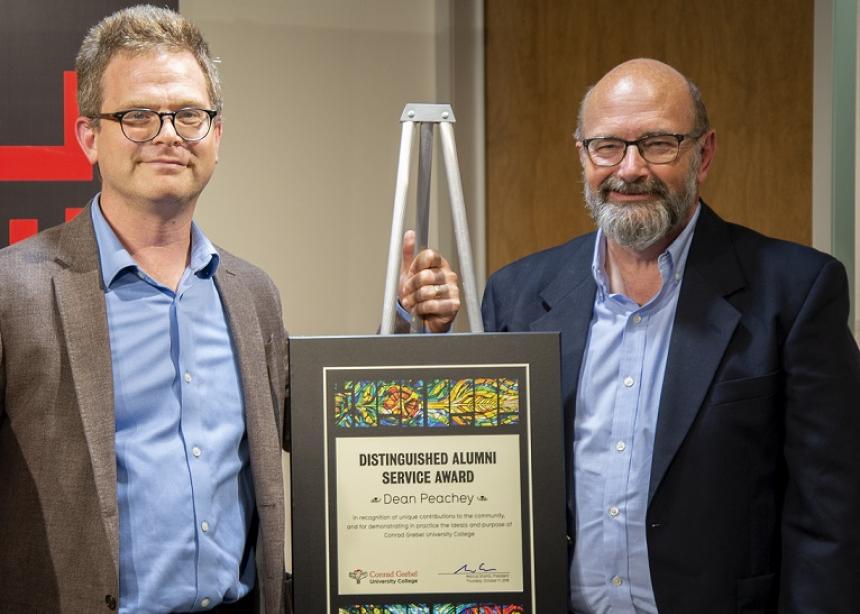 A crowd of old friends and alumni, as well as people interested in restorative justice, filled the Grebel Gallery on Oct. 11, 2018, to hear from Dean Peachey. He reflected on the seeds of peace that were sown during the 25 years he and his wife Melissa Miller spent in Kitchener-Waterloo.

At one point in the evening, he reflected on the collaborative work that he and others did in Waterloo Region, as they made efforts to transform the justice system. He participated in conversations that led to Community Mediation Service, the Victim Offender Reconciliation Program, Community Justice Initiatives, Police-Based Victim Services Program, Circles of Support and Accountability, and Network for Conflict Resolution. “We put a lot of effort into trying to change the world,” he concluded.

Peachey completed an MA degree in 1982 and a PhD in 1986 in psychology, both from the University of Waterloo. While completing his MA, he worked with Grebel Professor Conrad Brunk to develop Community Mediation Service in 1980, the first such program in Ontario. He was the coordinator of the program from 1980 to ’85.

As a student, Peachey showed a passion for active peacemaking. He played a key role in a symposium on nonviolence hosted at Grebel in 1975. The impetus for this symposium helped to lay the groundwork for what would become the Institute for Peace and Conflict Studies (PACS) at Grebel. Two years later, in 1977, it became an academic offering in peace and conflict studies with UWaterloo’s faculty of arts.

Peachey taught at Grebel as a PACS adjunct instructor between 1982 and 2000, offering courses such as community conflict resolution. During this time, he worked to establish the Network for Conflict Resolution, which emerged from a coalition of community-based conflict resolution agencies across Canada in 1985, and he served as its coordinator until 1995.

Peachey now serves as the executive director of Global College at what he called “the other UW” in Winnipeg. He is coordinator of the human rights program.

With his extensive contributions promoting peace in the church, community, nation and world, the impact of his work is immeasurable. His drive to educate and dialogue is commendable and embodies the ideals and mission of Grebel; for that reason, he was named Grebel’s 2018 Distinguished Alumni Service Award Winner. 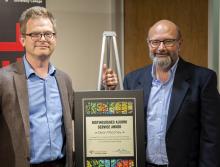