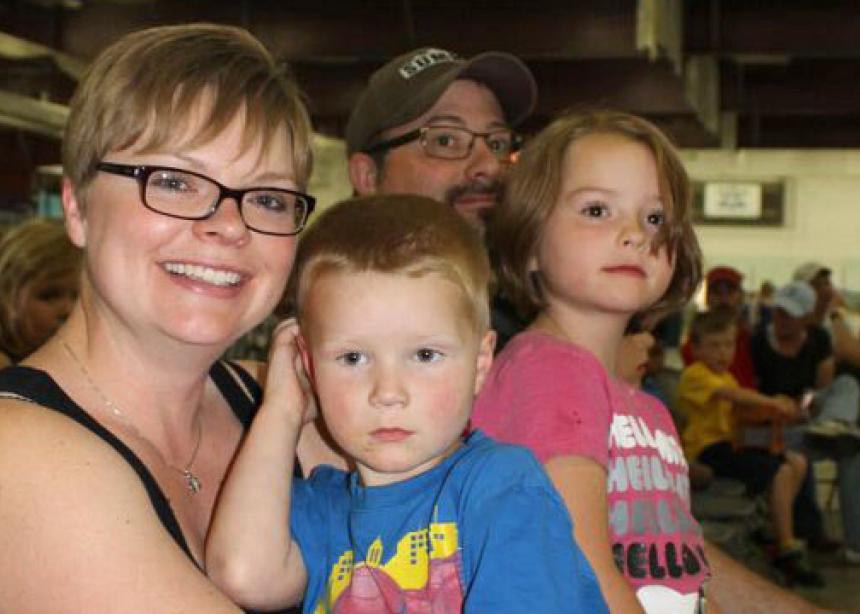 <p>Children and their parents remained engaged in the children&rsquo;s auction time led by Darcy Krahn on Saturday afternoon at the Mennonite Central Committee Alberta relief sale in Didsbury.</p>

Low oil prices in 2015 have not dampened the generosity of Alberta Mennonites. On June 5-6, 2015, the annual Mennonite Central Committee relief sale was held in Didsbury, and as of June 8, over $172,000 had been received with donations still trickling in. The last Didsbury sale, held in 2012, raised $170,000.

MCC Executive Director Abe Janzen, was impressed with the organization of the sale and the breadth of participation. “[People left with] a positive feeling about the work of MCC and the local organizing committee…there was plenty of evidence that the cross section of people doing the work and attending the sale is very broad.” Janzen also noted that in the last few years; “Young adults and teenagers were everywhere doing the work. It’s not primarily an older people’s event,” he said.

New to the Alberta sale was the auction of two sets of MCC Learning Tour tickets. The tours, one to Kenya’s sand dams, and one to the border wall between Mexico and the U.S.A., provide opportunities to see MCC’s work first hand and learn from the people MCC serves.

The annual sale alternates between three locations, Didsbury, Coaldale, and Sherwood Park. In addition to providing needed funds for MCC’s relief work, it offers a valuable opportunity for the larger Mennonite community to gather for fellowship.

Children and their parents remained engaged in the children’s auction time led by Darcy Krahn on Saturday afternoon at the Mennonite Central Committee Alberta relief sale in Didsbury.

Sebastian Loewen “runs off his rollkuchen” at the ‘GO’ booth at the MCC Relief sale in Didsbury.

Isabel Hillis has to pedal hard to blend her smoothie While Laurie Bennie of MCC provides encouragement.