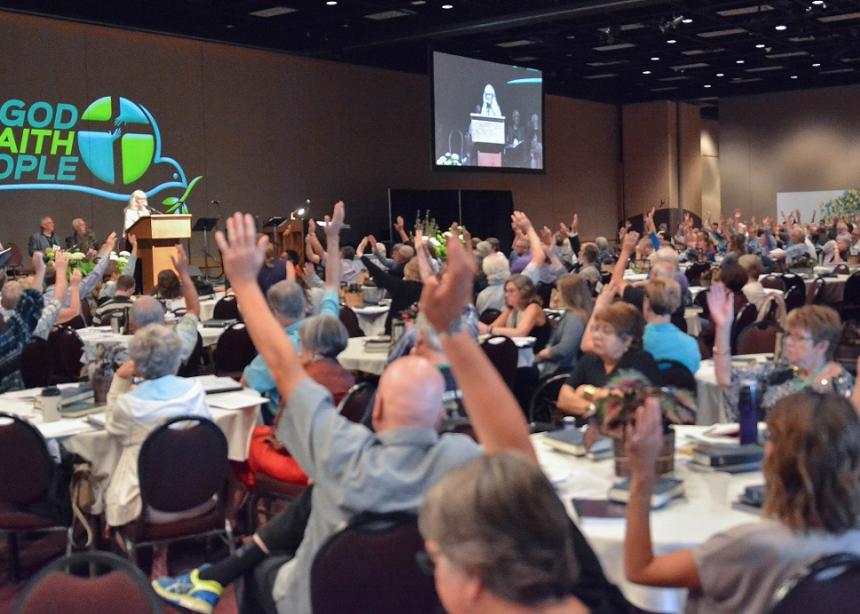 On July 9, 2016, a clear majority of delegates to Mennonite Church Canada’s Assembly 2016 voted in favour of a resolution seeking non-violent solutions to injustices in Israel-Palestine. Only one of 343 registered delegates voted against the resolution. (The resolution can be seen below.)

A similar resolution arose at the 2014 assembly, but was tabled for further work. A motion at the 2011 Assembly encouraged congregations to become more aware of Palestine-Israel issues.

The 2016 resolution was circulated in advance of the assembly in response to a plea to Mennonites from Palestinian Christians, who say they are prepared to live with the hardships that might result from the resolution—including a call for economic sanctions on commerce operating in and profiting from business in settlements and occupied territories.

The resolution was informed by the 2009 document entitled “A Moment of Truth: A Word of Faith, Hope and Love from the Heart of Palestinian Suffering,” issued by the churches of the region through a cooperative effort known as Kairos Palestine.

Both men have recently served and visited among the Christian community in the West Bank and Gaza. Becker has visited the region five times.

“In this resolution we are not taking sides between Israel and Palestine. We support the need for a safe place to live for both Israeli Jews and the Palestinian Arabs. We grieve whenever there is loss of life, whether that is Palestinian or Israeli,” Becker said.

“We are taking sides when it comes to justice,” he added, referring to a 1972 quote from Pope John Paul VI, “‘If you want to work for peace, you need to work for justice’ . . . As Mennonites we believe that to get rid of violence, you need to get rid of that which is causing the violence, or the war. In this case it is the occupation and how the Palestinian people are being treated in those occupied lands that is causing the difficulty.”

Becker sent the resolution to a rabbi friend in Israel. The rabbi responded, “Although I disagree with you, I’ve learned a lot, and I want to keep the conversation going.”

Friendly amendments to the resolution responded to some but not all of the desires of a delegation from the Jewish community in Canada, which included a local Saskatoon rabbi, representatives from the Centre for Israel and Jewish Affairs in Toronto and the Canadian Rabbinic Caucus executive. The delegation conversed in person and by phone with the movers of the motion, a representative of the Resolutions Committee, the executive director, moderator and vice moderator of Mennonite Church Canada, assembled in Saskatoon on July 7.

On the delegate floor, moderator Hilda Hildebrand referenced the communication, reading an excerpt from a letter inviting Mennonite Church Canada to “discuss ways in which we can work together to support positive trust building initiatives that strengthen Israeli-Palestinian reconciliation, co-existence, and the economic and social cooperation that create a foundation for lasting peace.” The invitation was conditional on not passing the call for economic sanctions. This portion of the resolution remained unchanged, though other concessions were made.

Speaking from the floor, delegate Pieter Neimeyer encouraged deeper understanding. He lived on a kibbutz as a teenager and has led numerous learning tours to Palestine over 20 years. His parents offered refuge to Jewish refugees during the war. “To vote for this resolution would also be welcomed by a good number of people in the Jewish community as well,” he said, adding that he would vote in favour.

Delegate Susan Kennel Harrison is active in the inter-faith community and lived in Israel-Palestine in 1997 during an uprising. She favoured passing the resolution, but with a warning.

“I saw lots of attempts at non-violent action on the part of the Palestinian community . . . we need to recognize that that has been a part of how they have proceeded. I am also very aware that [this resolution] is very empty if we don’t do the work of education for those of you who don’t feel you know what is behind this. . . . If we pass this resolution it will put a lot of fear in the hearts of the Jewish Canadians that I work with in interfaith dialogue.”

In response to a question about other Christian groups supporting economic sanctions, Rempel-Burkholder said the United Church of Canada has taken similar action. In the United States—the biggest ally of the state of Israel—the Presbyterian Church, the United Methodist Church, and the United Churches of Christ have also taken similar actions. Additionally the Religious Society of Friends (Quakers) in the U.S.A.—the only historic peace church that has had a worshipping community in Israel-Palestine—is also a strong supporter of economic sanctions.

Mennonite Church Canada is already taking steps to reach out to Jewish and Palestinian organizations in Canada who may wish to collaborate in the pursuit of peace.

Initial reaction on the internet has been predictably positive and negative. Twitter user ‏@ronnie_barkan wrote “#BDS news: Mennonite Church Canada responds to @KairosPalestine call. Thank you @mennochurch from an Israeli-Jew!” Other Jewish groups working for peace include Jewish Voices for Peace, Rabbis for Human Rights, and Jews for Justice for Palestinians.

The body of Mennonite individuals and congregations comprising the area and national churches have made significant commitments by supporting the resolution:

Anyone wishing to view the entire discussion on the delegate floor can access recorded live stream video. The discussion can be located in the video titled “Assembly 2016 – Saturday Evening Business” beginning at the 19:40 mark.

More about the discussions at Assembly 2016:
Hope through lament and loss (overview)
Decision roundup: Assembly 2016
Delegates have spoken (a word from Willard Metzger)

Resolution on Palestine and Israel

(Bolded wording reflects amendments in the form of additional text made by the delegate body on July 9, 2016.)

North American Mennonites have lived and studied, ministered and served in Palestine and Israel for nearly 70 years. Many partnerships have formed over these years, particularly through Mennonite Central Committee, our various denominational mission boards and Christian Peacemaker Teams. Thousands of Mennonites from Canada and the US have participated in learning tours and exchanges facilitated by Mennonite educational institutions, service and mission agencies, and tour operators. Most recently, Mennonite Church Canada has sent workers to serve at Bethlehem Bible College and Serve Nazareth.

This resolution emerges largely in response to the plea of Palestinian Christians that the global church come alongside the Palestinian people as they suffer under Israel’s 49-year military occupation of their lands: the West Bank, East Jerusalem and Gaza. Their concerns are expressed in the 2009 document entitled “A Moment of Truth: A Word of Faith, Hope and Love from the Heart of Palestinian Suffering,” issued by the churches of the region, through a cooperative effort known as Kairos Palestine.

I applaud Mennonite Church Canada for speaking out and taking this position.

Surely we have to love all people in this world. God loves Palestinians, Israelis, French, German, US people ...
We cannot approve pressure and sanctions in working for peace in this world! Isaiah 58:6-7: “Is not this the kind of fasting I have chosen: to loose the chains of injustice and untie the cords of the yoke, to set the oppressed free and break every yoke?7 Is it not to share your food with the hungry and to provide the poor wanderer with shelter—when you see the naked, to clothe them, and not to turn away from your own flesh and blood?
Can we loose the chains with sanctions and pressure?
In France, in Switzerland, in Germany etc., there are so many people coming from other nations, and they can live together with us and they have no claim for self-determination. They accept to live and work together in the country. Peacemakers have to encourage life together and not pressure for self-determination. Mennonite people have a great story with settlers in the American country, and they did not claim self-determination, but they accepted to be thankful and live near the other people in the country, submitted to the local authority. So many Palestinians accept to live in Israel together with Jewish people and they are very thankful. They don't claim self-determination. Peace is not the result of self-determination and autonomy, but living and handling together.