Accord ends 50 years of war in Colombia

Peace accord hopes to end 52 years of civil war 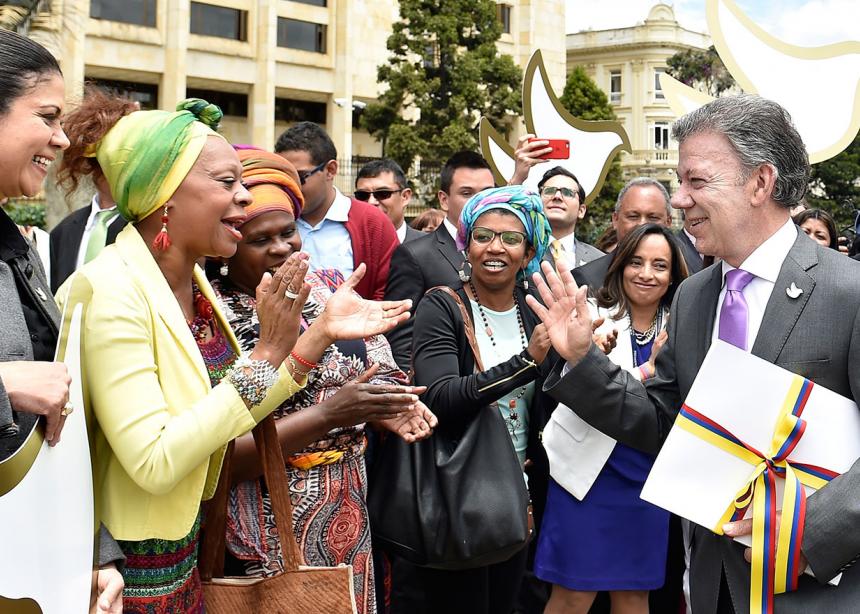 For decades, Colombia has been known for violence, narcotics and instability. But now it is within sight of an historic peace agreement that César García—the Colombian who heads Mennonite World Conference, which is based in the country—says mirrors notions of restorative justice valued by many Anabaptists.

After nearly four years of talks, the Colombian government and its main guerrilla adversary, the Revolutionary Armed Forces of Colombia, known as FARC, reached a peace agreement on Aug. 24, 2016.

García says via Skype from the capital of Bogota that the “sense of relief is huge” in Colombia. The accord will also bring a new era for Colombian Mennonites who have long been leaders in terms of Anabaptist peace practice.

The 297-page accord has yet to be ratified at a FARC conference, and then through a national plebiscite scheduled for Oct. 2. Polls indicate the national vote could be close. Because of this, García says the relief in the country is mixed with tension and heightened polarization. Opponents of the accord feel FARC members deserve harsher punishment than what the agreement stipulates.

If ratified, the accord would end a 52-year-old war that has killed an estimated 220,000 people, in addition to the many disappeared and the as many as eight million displaced people. Most families in the country of 50 million have been touched by the violence.

García says that two rural Mennonite congregations were entirely displaced. Mennonite churches were persecuted by either side in the conflict, and some served as a refuge for those displaced. According to García, some churches that are quite fundamentalist in some ways have developed a profound theology and practice of peace and reconciliation.

The accord promises change by means of various commitments.

First, FARC will hand over all its arms to the United Nations—to be used in the construction of three monuments—and transform itself into a political party. As an initial move, the parties agreed to an Aug. 29 ceasefire. FARC also commits to get out of the drug trade. The U.S. State Department says that FARC is “responsible for much of the world’s cocaine supply.”

As for the Colombian government, it commits to bring the rule of law to bear on paramilitaries and organized crime groups that have committed atrocities and continue to threaten many areas.

Most controversial is a transitional justice system under which FARC combatants will appear before a tribunal. Those who disclose participation in kidnappings and executions will face restricted mobility for five to eight years. Those involved in lesser crimes will go free. Members of the military will face similar justice.

The far-reaching document uses lofty language in reference to the eradication of extreme poverty and the reduction by half of rural poverty.

Paul Stucky, who has worked with faith-based peace organizations in Colombia for many years, says Colombia is one of the worst nations in the Americas in terms of distribution of wealth, and this has helped to fuel the conflict.

A major piece of the accord’s commitment to greater equality is agrarian reform. The government commits to obtain, by various means other than expropriation, three million hectares of land to be given to landless and land-poor peasants over the next 10 years. The accord sets an objective of similarly redistributing another 10 million hectares in the decade thereafter. Priority will be given to women heads of households and displaced people. The government will also provide greater protection of property rights for another seven million hectares owned by small and medium-sized landholders to help prevent illegal seizure of land.

After five decades of armed struggled, the question now is whether a restorative vision will take hold in a nation with deep scars and open wounds. Will the prospect of peace prevail over vindictiveness? And if the country votes for peace, will the government be able to rein in organized crime? Will it redistribute land as promised? Will FARC leave the lucrative drug trade? Will possible FARC splinter groups hang onto their arms? Will the “underlying distrust” that Stucky sees on both sides transform into something resembling reconciliation?

Milena Rincon, a Colombian who has worked for Christian Peacemaker Teams (CPT) for 13 years, says the campesino (peasant farming) communities that CPT accompanies have said it is important for international groups to maintain their presence in Colombia, in part to help ensure that the promises of the accord are realized. Return of stolen land is a key factor for many people CPT works with.

What does true justice look like in such a complex and bloodied situation? García says the wording in the accord is solid: acknowledge the facts, acknowledge responsibility and create the possibility of repairing harm to victims. This, he says, is “coherent with our notions of restorative justice.” Many victims on all sides will need to forgive, he adds.

Stucky says the challenge for some churches, particularly in rural areas where fighting was concentrated, will be to help reintegrate former combatants into normal life in a healing way.

Speaking globally, García says that if we look only for justice in the punitive sense, then injustice will result. “But if we act as a people of reconciliation, we can bring a different future; that is our hope for Colombia now.”

See also:
‘It was a very sad day’
“Saying goodbye to war and hello to peace in Colombia
Colombian churches call for prayer