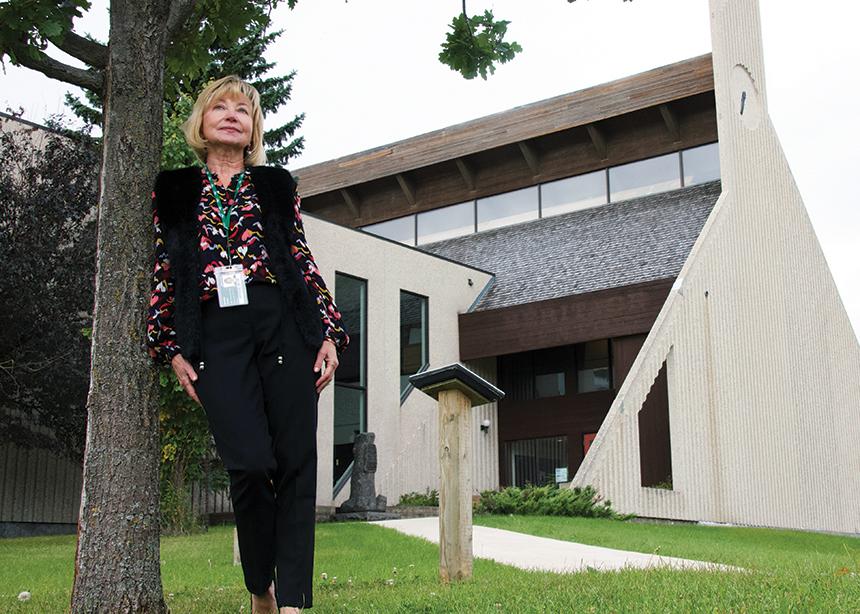 Natalyia Venger leans against an offspring of the Chortitza oak tree in Ukraine on the campus of Canadian Mennonite University. The original Chortitza oak tree was an iconic landmark on Chortitza Island in the Dnieper River. It was estimated to be between 700 and 800 years old when it died. (Photo by Dan Dyck)

Like a gem miner with a headlamp, Natalyia Venger scans microfilms, hunting for treasures rescued from Russian archives now stored at the Mennonite Heritage Archives (MHA) in Winnipeg. She is here from Ukraine to study Mennonite colonies under Russian nationalism in the early 20th century.

It was a time of great upheaval for Mennonites. She wants to know how they navigated through civil unrest, a collapsing monarchy and then a revolution. It seems like more than an academic pursuit, as though her research might shine light on how ordinary Ukrainians can cope with the Russian invasion of her country.

The irony is poignant. The very thing she is studying has once again reared its head, one of the reasons she is in Winnipeg.

The petite, fair-haired, 58-year-old professor from Dnipropetrovsk National University calls herself an “accidental” visiting scholar. It is a convenient coincidence: she is on a sabbatical that offers her safe haven from the war.

The arrangement was aided by Aileen Friesen, co-director of the Centre for Transnational Mennonite Studies at the University of Winnipeg, with funding from the Plett Foundation. They met when Venger was studying Mennonite entrepreneurship under a Fulbright Scholarship some 15 years ago.

“North American scholars are no longer able to visit Ukraine. Nataliya’s knowledge of the history of south Ukraine, of the land and its people, helps to facilitate new conversations and new research trajectories,” Friesen wrote in an email.

Interest in Russian Mennonite settlers is recent among the Ukrainian people. When the newly independent country opened access to secret Mennonite files in the early 1990s, Venger’s professor sent her to the regional archives in search of a research topic. Here, she first learned of Mennonite colonies, and she was astonished.

“After two weeks, I understood that it would become the subject of my life. Mennonites were a small group, but they were involved in everything. Their [path] indicated all the changes in the Russian empire. I see so many connections with the history of the Ukrainian people,” she said.

Venger recalls how Ukrainians embraced North American Mennonites visiting the country in the 1980s for heritage tours. Some of those visitors saw great social needs, and they established numerous charitable efforts to help.

“It’s very good for Ukraine to have this kind of denomination. They’re very productive in changing the world around them. It connects to the roots of their faith,” she said.

She has come to the conclusion that “I can’t understand the history of Ukraine without the Mennonites’ presence.”

Conrad Stoesz, the MHA’s archivist, sees Venger making a unique contribution to the Mennonite story. Her ability to read Russian documents and her connections to archives in Ukraine and Russia is a gift.

“She is a networker by nature, building rapport and relationships with people, which encourages sharing of knowledge and energies,” he said.

Venger has no idea what kind of home she will return to when her visiting scholarship ends on May 31, 2023. In her heart, she feels Ukraine will emerge victorious. But if Russia succeeds, she believes “they will try to force us to change our identity.”

Friesen admires her strength, saying, “She is determined and has a strong moral compass, which keeps her calm and focused during this overwhelming moment in Ukraine’s history.”

Venger connects online with family and friends daily for updates on the war. It is not psychologically healthy, she admits, saying, “Just a year ago my future was predictable, and I thought about what I would do in 10 years.”

So far, the flat in her building in Dnipro remains intact. Her husband Oleg, who has studied history and law, has been pressed into service as an officer in the Ukrainian military. He cannot legally leave the country. An adult daughter lives in New York.

Some Sundays she will venture out to visit a Ukrainian Orthodox Church, where the language and the people feel familiar. Other Sundays she’ll attend a Mennonite church, where she feels “very comfortable.” Faith helps her believe in the future, in justice. At church, she feels able to talk to God. “Faith helps me to keep my soul and my sentiments in order, to be strong,” she said.

Over the years of her studies, and especially during her current stay, Venger has found a strong sense of community among her Mennonite colleagues. She feels welcomed, cared for.

For now, Venger’s personal circumstances and her life’s work have intersected in Winnipeg. It’s the right place to be for this moment. She is safe, putting in hours, hoping to glean insights into how a small group of Mennonites managed political upheaval more than a century ago, hoping her work will ensure Mennonites are not again hidden away in secret files. 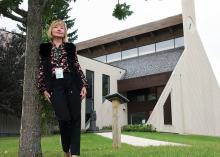 Natalyia Venger leans against an offspring of the Chortitza oak tree in Ukraine on the campus of Canadian Mennonite University. The original Chortitza oak tree was an iconic landmark on Chortitza Island in the Dnieper River. It was estimated to be between 700 and 800 years old when it died. (Photo by Dan Dyck)