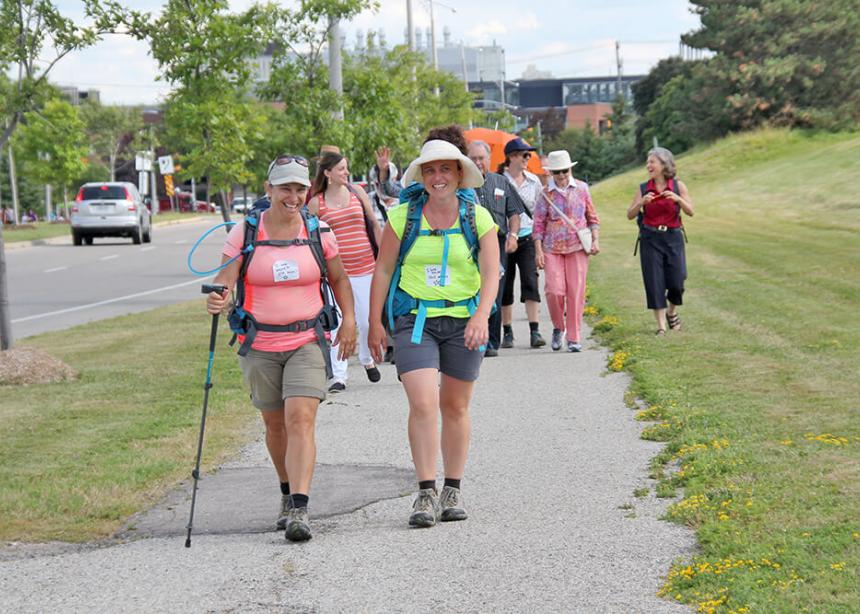 <p>Christine Brubaker (left) and Erin Brubacher walk the last kilometre of 700 as they approach the Brubacher house on the grounds of the University of Waterloo. An invitation had gone out and a number of people joined them for the last hour of the journey. (Photo by Dave Rogalsky)</p>

Erin Brubacher and Christine Brubaker are seventh cousins, more or less. Before their 700-kilometre walk from Brubaker Valley Road in Lancaster, Pa., to the historic John E. Brubacher House in Waterloo, Ont., they discovered a common ancestor, Hans Bruppacher, born in Switzerland in the 1600s. Erin comes from the Abraham Brubacher line and Christine from the Hans Brubacher line. As actors they joked that they were “learning their lines” as they spoke to the group gathered in Waterloo to welcome them “home” on Aug. 6.

The walk from Pennsylvania to Ontario was part of a larger collaboration that took them to the Live Art Series for the SummerWorks Performance Festival in Toronto August 7, 8, 10 and 11. “The Unpacking” explored where they went, what they saw and how they experienced following the “Trail of the Conestoga,” which their ancestors followed from Pennsylvania to Ontario in the 1700s. Brubacher and Brubaker noted in Waterloo that they had forded a river on foot. At that moment they were probably the furthest off the original route, but they felt the closest to their ancestors who had to ford many rivers on their trek.

Erin Brubacher said of the journey: “Our piece is inherently about taking time, and interrupting the everyday pace that has become our habit. Recently, a stranger asked if we were walking to learn how to work and be together: This is certainly part of it.”

They are calling the material they have gathered an “auto-mythography” looking at what people remember, how they remember it, what people make of what they think they remember, and how this is all part of a larger story. They noticed on their walk that as they talked about the previous day they would remember it differently. Stories are created as people move through life.

Both Brubacher and Brubaker are accomplished participants in the performing arts—acting, writing, directing and arts education—working in Toronto and beyond. At the “homecoming” in Waterloo they told the story of the trip as a series of locations where they had stayed overnight, a piece of theatre including several refrains of “a day off.”

According to Brubaker they used unscripted performances at SummerWorks, “unpacking the material with an audience, so that they could discover meaning with others and where the audiences’ curiosity/questions live.” They went on an extended walk with an audience, fielded questions from those people, and told the story of the whole trip in 45 minutes.

While the project started as a generational piece, it became less about Mennonite history and more about Erin and Christine in relationship because of their shared name. Erin’s dad did a lot of genealogical research and discovered their ancestors were first cousins who emigrated to Pennsylvania in 1750, but the walk became about making someone family/community and the importance of relationships in life.

Christine Brubaker (left) and Erin Brubacher walk the last kilometre of 700 as they approach the Brubacher house on the grounds of the University of Waterloo. An invitation had gone out and a number of people joined them for the last hour of the journey. (Photo by Dave Rogalsky)