350 reasons to care for the Earth 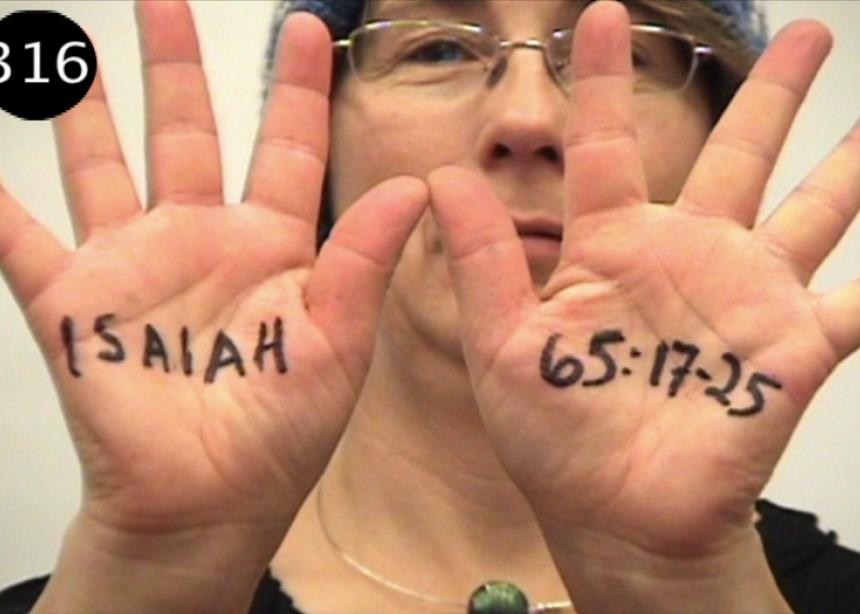 <p>Christine Penner participates in Hope Mennonite Church&rsquo;s YouTube video that presents 350 biblical reasons for Christians to care for the Earth.</p>

Hope Mennonite Church in Winnipeg produced a video for YouTube expressing its belief that God calls Christians to look after creation.

The idea was conceived on Peace Sunday, November 2009. On that Sunday, the congregation divided into small groups to discuss how they could make a public declaration for peace.

“One group focused on the issue of creation care, as this was the passion of one particular member of that group,” recalls Pastor Lynell Bergen. “And somehow the idea of doing a video for YouTube came up.”

Congregants wanted to make a connection between creation care and their faith. As the video clip explains, “Scientists are calling for a reduction of CO2 in the atmosphere to 350 parts per million, so that the Earth can continue to sustain life.”

Reflecting on that number, they wondered if the Bible contained 350 verses that spoke about caring for creation. And they found them. In unique and entertaining ways, members of the congregation feature each of those 350 verses.

Curtis Wiebe, a member of the church with a master’s degree in filmmaking, directed and produced the video in record time.

“With a small committee, a gathering of props, a musician and the energy of all our church members, old, young and in between, a YouTube video was produced,” says Bergen. “It was ready for December 10, 2009, the Sunday when churches were invited to do some sort of symbolic action around the number ‘350’ during the Climate Change conference being held in Copenhagen.”

The video was shown this summer during the Mennonite Church Canada assembly in Calgary, Alta., and has been picked up and used by other churches and individuals, Bergen notes.

The YouTube video and all 350 verses can be found online here.

For more on stewardship of the Earth, see:

"A 'small protest' they call home"

"People can do this"

Christine Penner participates in Hope Mennonite Church’s YouTube video that presents 350 biblical reasons for Christians to care for the Earth.