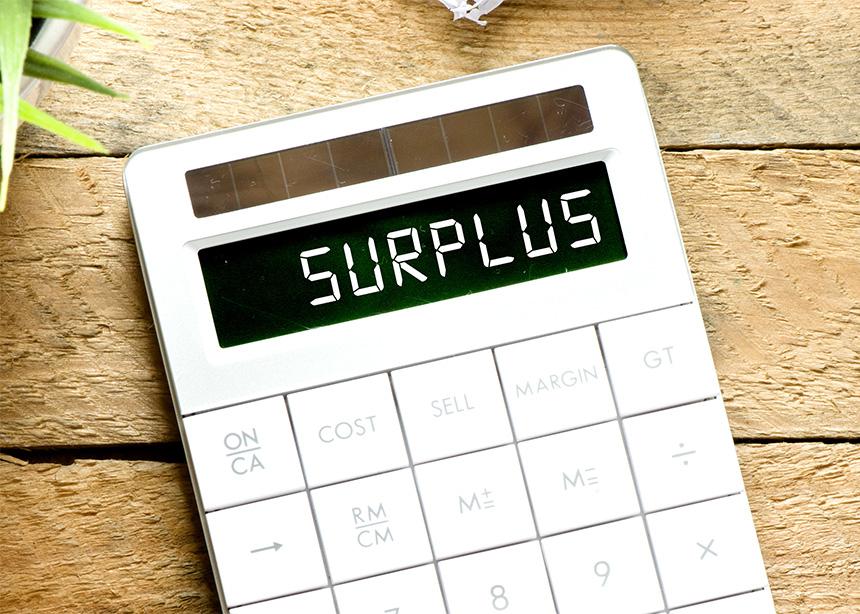 Financial giving from Mennonite Church Canada congregations and individuals was stable in 2020 despite pandemic economic uncertainty. By year-end, the regional church bodies and MC Canada had strongly positive financial results, based on better-than-expected revenue and lower-than-expected costs.

In planning for 2021, the regional churches acknowledged continued pandemic uncertainty and directed their 2020 surpluses into support for 2021 programs.

The 2020 year-end good news skips over the turmoil faced by regional churches in the spring, when congregations closed to in-person worship. Giving patterns faltered while congregations reorganized to offer virtual services. To deal with the uncertainty, the regional churches accessed federal and provincial emergency wage-support programs such as the Canada Emergency Wage Subsidy (CEWS) or the Temporary Wage Subsidy (TWS).

Gerry Grunau, moderator of MC B.C., recalled in an interview, “Back in March, we wondered how things were going to go. Would our congregations survive if they didn’t meet in person? . . . But our biggest concern was for the summer camp program.” MC B.C. owns Camp Squeah in Hope. In 2019, Squeah reported revenue of $1.4 million but, in spring 2020, the camp was possibly facing zero revenue for the summer. “In the absence of a summer camping program,” said Grunau, “[we] applied to CEWS to provide income supplements for specific Camp Squeah staff, to address continual program adjustments, long-term pandemic planning and opportunities for capital and maintenance improvements.”

In MC Alberta’s 2020 annual report, finance chair Wayne Janz wrote: “Our federal and provincial governments had a role in supporting us . . . to help keep all our regular staff employed and . . . to help us cover the expected higher costs to restart the summer camp program in 2021.”

MC Saskatchewan and MC Eastern Canada do not own camps, but financially support several summer camps in their constituencies. They also accessed federal grants to offset drops in their revenue streams.

MC Manitoba summarized the situation in the notes on its Statement of Operations: “This surplus was unexpected . . . [it] was generated by lower than expected expenses, greater than expected government COVID-19 subsidies, and the much lower amount forwarded to MC Canada than budgeted.”

Congregational giving to the larger church has been declining for years. Two common reasons cited for the trend include: lower church attendance means fewer people giving, and more support for local missions means less gets passed on to the larger church. In response, the regional churches have hired, or are hiring, engagement ministers to strengthen relationships with the congregations and attract individual donations on top of congregational commitments.

The Shared Revenue Agreement for MC Canada is also under review. MC Canada recorded a surplus of $144,259 at its year end on Jan. 31, 2021. The budget was based on amounts pledged by each regional church, a system in place since 2018. In addition to contributions from the regional churches, donations to the MC Canada Witness program were higher than expected, and expenses for travel and in-person events were low. 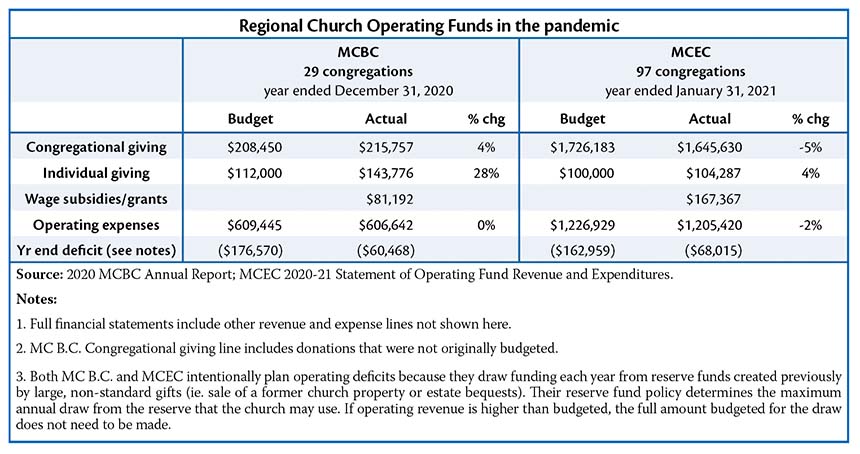 Since MC Manitoba historically passed on proportionately more to MC Canada than the other regional churches, it reduced its contribution in 2020. When MC Canada still recorded a surplus, Joint Council approved a return of $68,174 of the surplus to all the regional churches in proportion to what each had contributed. Another $68,000 was transferred to the Capital Reserve Fund in anticipation of upcoming building repairs.

According to Joint Council minutes of Jan. 30, 2021, regional churches are looking at a new funding model in which each regional church sets a percentage of its donations to pass on to MC Canada tare on-going.

In budgeting for 2021, all regional churches pointed out at their annual meetings that the ongoing uncertainty made it difficult to plan with accuracy. They do not intend to apply for further government assistance, but planned to use 2020 surpluses for 2021 programming.

In MC Alberta, the 2020 budget calls for a $72,000 deficit. Treasurer Wayne Janz wrote: “It is not typical to propose such a large deficit budget. . . . We had an unexpected $95,000 surplus in 2020. . . . This gives us the means to restart our summer camp program and proceed with filling a church engagement position. 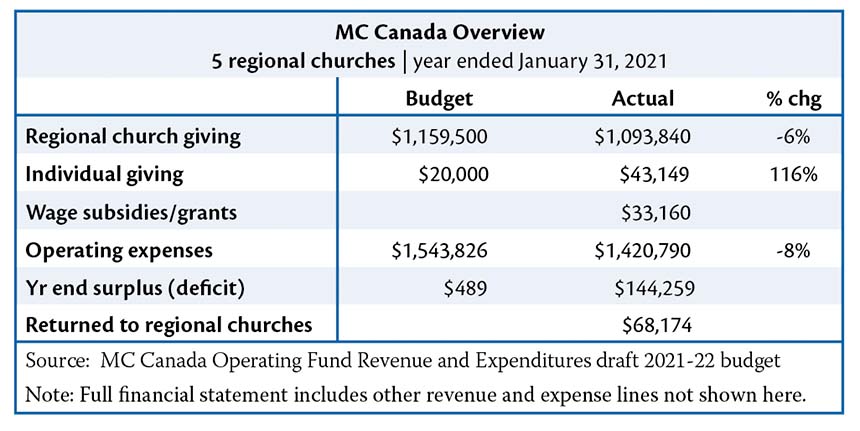 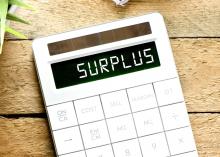