This photo is of a men’s quartet singing for a radio broadcast in a Vancouver Mennonite church basement circa the 1960s. Advances in mass communication such as radio were first met with suspicion and in some cases were banned in Mennonite communities warning about worldly influences entering the home and community. Committees were established to consider the best response to these innovations. By the late 1940s, some Canadian Mennonite groups embraced radio and used it to transmit Christian values into the home. Radio became a vehicle to support the faith community and also to facilitate mission to others. Early programs were a mix of German and English and did accelerate the acculturation of the Mennonite communities into Canadian life, the very thing feared by those who were suspicious of radio. 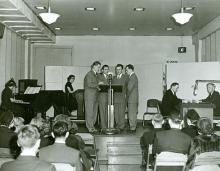