St. Jacobs Mennonite Church honours the cloud of witnesses in its 175-year history 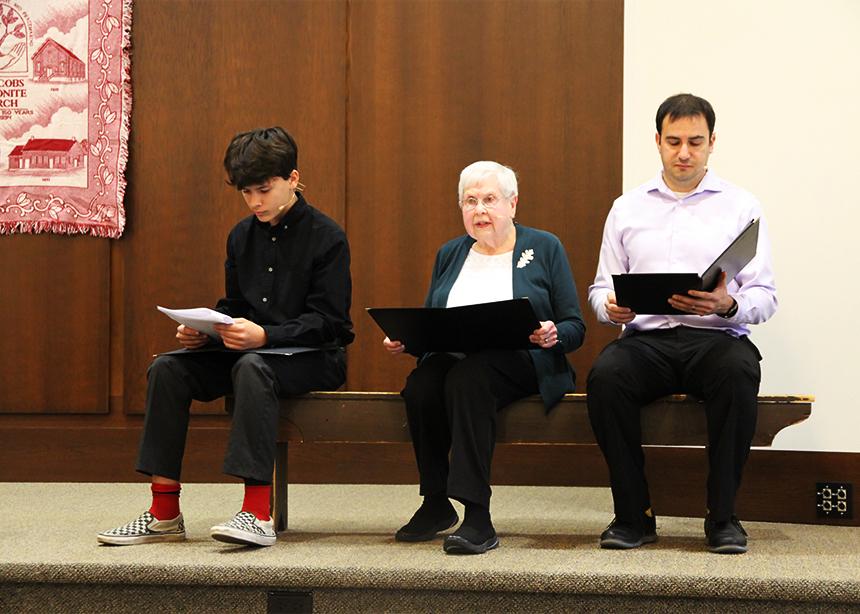 Three generations of St. Jacobs Mennonite Church share a readers theatre called ‘175 Years by Faith’ during a worship service celebrating its 175th anniversary. Pictured from left to right: Jonah Willms, Doris Kramer and Micah Jarvis sit on a bench from the 1851 meetinghouse at the church’s original location in the unmarked hamlet of Three Bridges. (Photo by Marcia Shantz)

In 1844, just under a half-hectare of land near the east bank of the Conestoga River was purchased from John Brubacher for the sum of five shillings. A log schoolhouse was constructed there, on what was then part of the Haldimand Tract and the traditional lands of the Neutral, Anishinaabe and Haudenosaunee peoples. The log structure was used for church services until 1851, when a wood frame building known as the Conestoga Meeting House was constructed.

One-hundred-and-seventy-five years later, St. Jacobs Mennonite Church continues as a local expression of the body of Christ. The church is now located in the village of St. Jacobs, but its cemetery is still in use at the original site, in the unmarked hamlet of Three Bridges.

On Nov. 24, the congregation celebrated its 175th anniversary in a service of gratitude, remembering the “cloud of witnesses” that has gone before.

Using scriptures from Hebrews 11 and 12,  the congregation centred its celebration on biblical and historical characters who, by faith, helped to shape its identity and particular expression of church. A reading called “175 Years by Faith” affirmed that the church stands “in a line of faithfulness and witness to God’s leading.”

A narrated slideshow highlighted the history of the church, including its split from the Old Order Mennonite group in 1889, and its move into the village of St. Jacobs in 1915 to a parcel of land donated for a dollar by Samuel Good. It was there that a red-brick church was constructed, including a basement with space for children’s Sunday school. The building has undergone several additions and renovations since then.

In 2015, a service of celebration was held in an upgraded and refurbished sanctuary to mark the 100th anniversary of the church in its current location.

Other significant events in the church’s history include:

Over the years, strangers became friends as the church sponsored refugees from Laos in the early 1980s, who later gave birth to Grace Lao Mennonite Church in Kitchener, Ont. The congregation also supported and partnered with the Benin Bible Institute in Benin, West Africa; and, most recently, supported refugees from Syria.

The growing diversity of the congregation was described in the readers theatre as “an ever-expanding gift.”

The St. Jacobs congregation echoed wider church history as it wrestled with ethical, biblical and cultural questions that arose over the decades around fundamentalism, evangelism, separation from the world, the wearing of prayer coverings by women, divorce and remarriage, relationships with the young men who enlisted during the World Wars, women in leadership, gender and sexuality, environmentalism, and Indigenous reconciliation.

The Nov. 24 service of celebration included an Eternity Sunday tradition of lighting candles in memory of those who have died. This year, the commemoration included the great cloud of witnesses that worshipped in the congregation during its 175 years and continues to inspire the church at St. Jacobs to live by faith.

The morning ended with sharing “breads and spreads” in a time of fellowship. 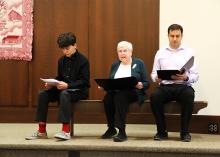 Three generations of St. Jacobs Mennonite Church share a readers theatre called ‘175 Years by Faith’ during a worship service celebrating its 175th anniversary. Pictured from left to right: Jonah Willms, Doris Kramer and Micah Jarvis sit on a bench from the 1851 meetinghouse at the church’s original location in the unmarked hamlet of Three Bridges. (Photo by Marcia Shantz) 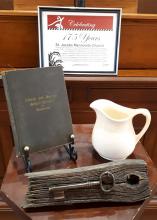