‘We sing the same songs’ 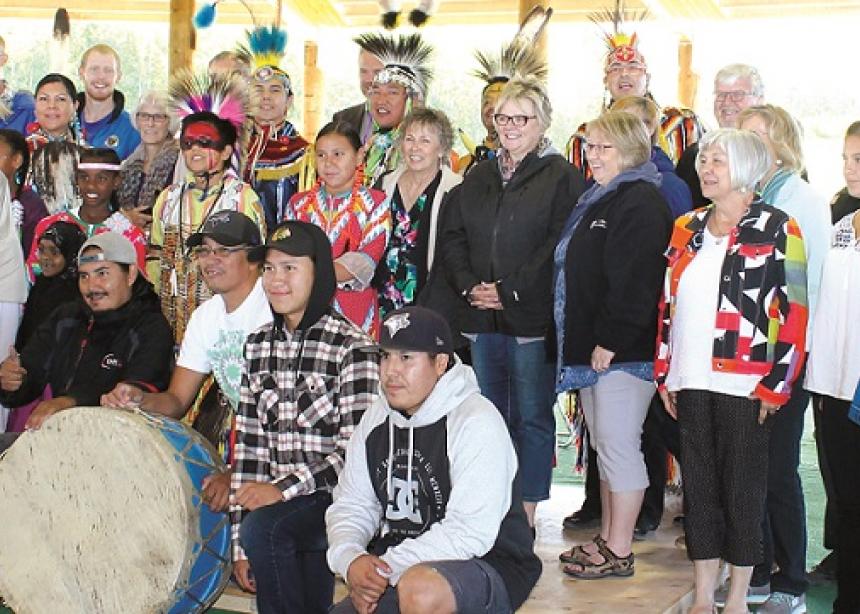 “Next to food as a gift from God . . . song pulls us together.” With these words, Harry Lafond welcomed singers, dancers and audience members to a very special concert.

Muskeg Lake Cree Nation hosted the culture-sharing event, which took place Aug. 20 in a large outdoor shelter known as the Arbour. The people of Muskeg Lake and Mennonite Church Saskatchewan’s Walking the Path Committee worked together to plan the event.

A little over a year ago, during MC Canada’s assembly in Saskatoon, a group of assembly participants toured the first nation. Ben Pauls, pastor of Zoar Mennonite Church in Waldheim, led participants in singing for their Indigenous hosts in the Arbour.

At the time, Pauls noted the facility’s excellent acoustics. That event became the spark for this summer’s Shared Land, Shared Song gathering.

In preparation, Pauls assembled a choir of about 20 singers from as many as eight MC Saskatchewan congregations. The choir performed a rich program of works ranging from classical to contemporary, including several pieces with Indigenous origins.

Dolores Sand, a Muskeg Lake elder, sang a number of songs in the Cree language. She also sang “Will You Come and Follow Me” (familiar to the Mennonites in the audience as No. 39 in the Sing the Story songbook). As Sand took her seat, Pauls noted the common ground shared by Mennonites and their Indigenous neighbours. “It’s nice to know we sing the same songs,” he said.

Cree dancers in full regalia performed traditional powwow dances, accompanied by the Two Nations Drummers. Cal Arcand, the master of ceremonies who was also one of the dancers, explained the significance of each dance. He encouraged the audience to show appreciation for the dancers with their applause not only after—but during—their performances.

Jordan Daniels, a young fiddler from the Mistawasis First Nation, performed solo and also accompanied Katie Boyer of Rosthern, Sask., as she introduced the audience to several traditional Métis dances.

Arcand and the Many Nations Dancers brought the concert to a moving conclusion as they led everyone present in a round dance.

A group of recent immigrants from Saskatoon’s Open Door Society also joined Mennonites and Muskeg Lake residents for the concert. They had arrived earlier in the afternoon for a tour of the first nation.

Finally, performers and audience members alike were invited to join in a potluck feast featuring Mennonite-style farmer’s sausage and first nations-style bannock. Lafond said that, in planning the event, they felt that sharing food was essential: “Our people totally enjoyed the Mennonite sausage the first time we were together, so the menu was easy.” An abundance of salads and desserts also graced the buffet.

Eric Olfert, who is part of the Walking the Path Committee, said the event was certainly a success in terms of attendance. He estimated that 70 to 75 Mennonites attended, along with the 50 newcomers from the Open Door Society. About 45 to 50 residents of Muskeg Lake acted as hosts for the event.

But numbers don’t tell the whole story. “This weekend was [also] a success in terms of building relationships,” said Olfert. “It felt like we were getting to the objective of being comfortable in each other’s presence.”

Lafond is no stranger to building relationships. As executive director of the Office of the Treaty Commissioner, he has had many years of experience facilitating conversations between diverse groups. “Getting people into the same room is one of the key things,” he said, along with “providing ways of engaging that feel safe.” Sharing a meal, he added, can provide a safe place for conversation to begin.

What is the next step along the path? Olfert cited Lafond: “Harry says relationships develop best around stories, music and food.” As this event focussed on music and food, perhaps a future gathering will feature an exchange of stories. Lafond has heard of the possibility of one MC Saskatchewan congregation joining the people of Muskeg Lake for a prayer exchange.

Whatever the future holds, it seems certain these two communities will continue walking the path together. 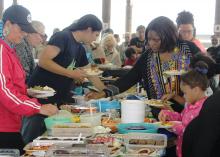 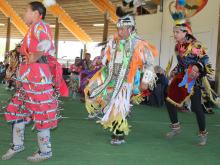 It was a very good day!