‘We need to learn to dream as a church’ 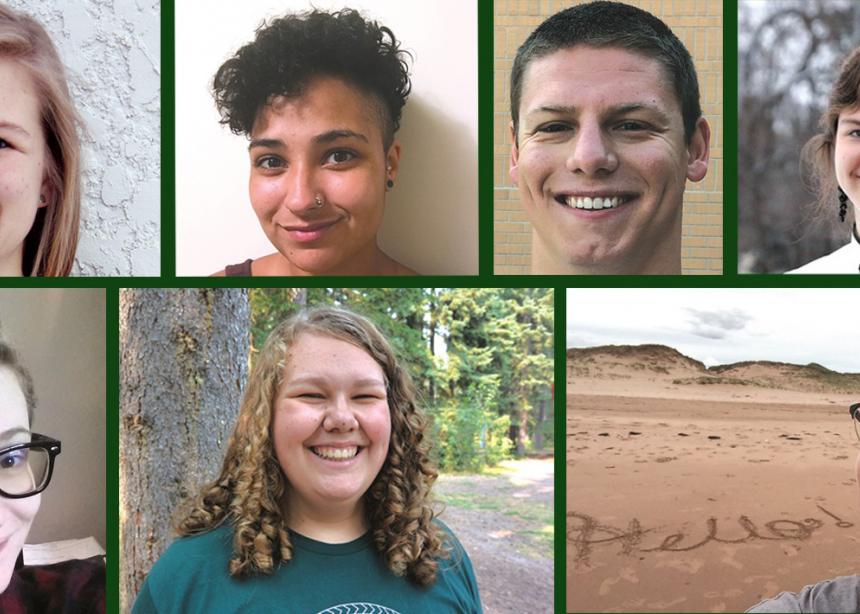 Next month, those gathered at Mennonite Church Canada’s special delegate assembly will make major decisions about the structure of the church based on proposals from the Future Directions Task Force.
With that in mind, Canadian Mennonite asked young adults from across Canada: What are your hopes and dreams for MC Canada in the next 10 years?

Annika Krause, 29, Sherbrooke Mennonite Church, Vancouver
“There’s been a lot of conflict over [Being a Faithful Church], and I think it especially hit B.C. hard,” she says, referring to the six-year process MC Canada undertook to address sexuality in the life of the church. “My biggest dream is that we come back to a place of unification, where we can agree to disagree but work toward our common goals, and essentially see Christ in the people we disagree with.”

Rebecca Janzen, 21, First Mennonite Church, Edmonton
Her key hope for the future is that the 200-plus churches that make up MC Canada stay connected. “I know that there needs to be a change in the structure of MC Canada, but, honestly, it makes me nervous,” she says.
She believes the changes that the Future Directions Task Force is proposing will put a lot of pressure on the area churches, and things won’t go as smoothly as they have in the past. “It’s hard to know what is going to happen because we’ve never done this before,” she says. “There are just a lot of unknowns at this point.”
In the future, she hopes to see more serious attention paid to youth and young adult voices. Creating more space for youth and young adults during delegate sessions, and lowering the cost of attending assemblies, are two things she believes would improve the national church: “It’s quite inaccessible to a lot of people, especially youth and young adults who don’t have a lot of money right now. It becomes a lot more challenging to go to the delegate sessions.”

Claire Hanson, 19, Rosthern Mennonite Church, Sask.
For her, it’s important that the Mennonite church continues its efforts to work toward reconciliation with Canada’s Indigenous population. She points to two recent events that have taken place in Saskatchewan as examples of the work she would like to see continue: the Spruce River Folk Fest, a fundraiser for landless first nations to raise money to apply for land claims; and the Shared Land, Shared Song event that featured a Mennonite choir performing with a group of dancers from Muskeg Lake Cree Nation.

“These events are very encouraging to me and show me that the Mennonite church does take reconciliation seriously,” she says. “We are moving forward in our relationship, one small step at a time.”

Gabby Martin, 20, Zoar Mennonite Church, Waldheim, Sask.
“I’d like to see a little more trust in the [Future Directions], that things are going to work out,” she says. “Instead of putting energy into pointing out the flaws, accept that change needs to happen and move on.”
“People have spent a lot of time planning this and proposing this, and they’ve been given a lot of backlash,” she adds. “We need more trust that it’s going to work out.”

Melanie Kampen, 27, Springfield Heights Mennonite Church, Winnipeg
“Over the next 10 years, I would love to see the Mennonite church become what it has long professed to be: witnessing the gospel, the good news, of liberation in the world,” she says.
“Mennonites are known as a peace church and a church that stands up against injustice. However, [I] and many other young adults have noticed that this has become romanticized and idealized by many inside and outside of the church doors. [MC] Canada is not seen as an organization on the front lines of social justice work in Canada. If MC Canada wants to be a witness of the gospel, then it needs to take a stand against harm in our own Mennonite communities, as well as others in which our constituents are situated. To me, this means protecting and supporting survivors of sexual violence and other forms of abuse; doing anti-racism work in our churches and engaging in solidarity with those who are racially marginalized in our cities; and unapologetically accepting and supporting gender and sexual diversity.”

Colin Reimer, 24, Whitewater Mennonite Church, Boissevain, Man.
He is passionate about both camp ministry and working toward reconciliation with Indigenous peoples. “I think those both play a huge role in what I would love to see from our church” in the future, he says. Camp ministry provides an avenue for shaping the faith formation of youth, and putting money towards supporting that is key for him. “They’re the future of our church, and I think it’s important we honour that.” He believes that MC Canada has done great work in recent years in its efforts to build relationships with Indigenous peoples. He would like to see that continue. “I think it will both advance our church . . . and create positive outlets for people on both sides,” he says.

Laura Carr-Pries, 22, St. Jacobs Mennonite Church, Ont.
“My wild hope and dream for the church really isn’t that wild,” she says. “[It’s] that the church can be a body of believers that come together in worship and conversation.” That could be conversation that leads to action on social justice issues or it could be conversation for the purpose of discernment or fellowship. “I think that’s a big part of what the church is, and should continue to live into, and I think that’s often where we’ve found ourselves fragmented—[when there’s been] that inability to have conversation and inability to come together in fellowship in spite of differences.” She adds, “We need to learn to dream as a church, and to do so [placing our] faith in God, not ourselves.”