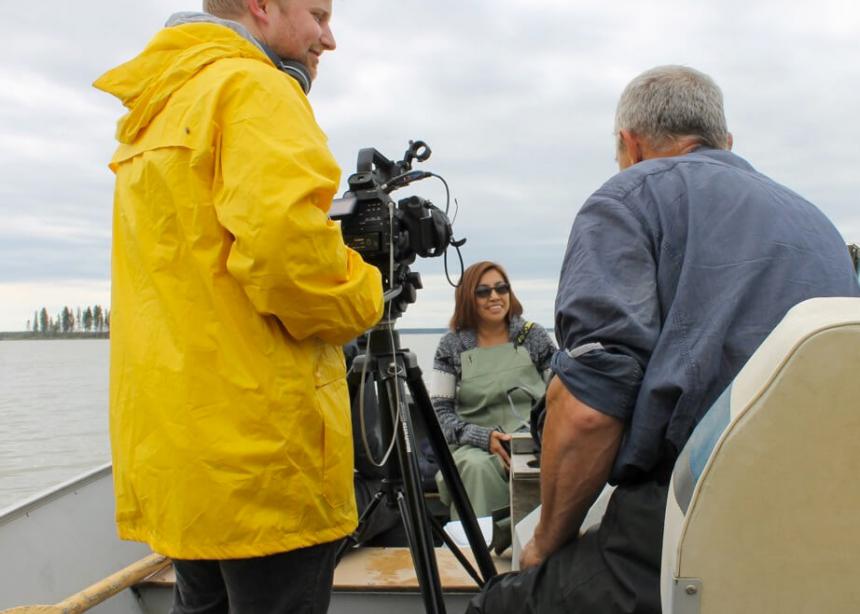 When the water goes up behind the $8.7-billion Keeyask Dam in northern Manitoba, one family will lose more than any other. At a church-sponsored event in Winnipeg on March 18, 2017, they told their story.

The seven Kitchekeesik sisters from Tataskweyak Cree Nation made the 900-kilometre trip south to speak at the premiere of a short film that takes viewers down the Nelson River to the area that will be flooded by Manitoba Hydro’s Keeyask Dam, slated for completion in 2021.

For Love of a River: Two Stories of Loss and Longing, was directed by Brad Leitch, a graduate of Canadian Mennonite University; commissioned by the Interchurch Council on Hydropower, the group that hosted the Winnipeg event; and funded largely by Mennonite Central Committee Manitoba.

While the sisters and their two brothers live in the Tataskweyak community of Split Lake, they consider the downriver area to be flooded as their home. The film shows Ila Disbrowe, one of the sisters, standing at the site of her dad’s first cabin. “We grew up here, we were raised here,” she says. “When we feel lonely, we come here.”

Many family members still spend time hunting, fishing and just enjoying the peace and quiet in the area. But now construction cranes loom on the horizon, large areas have been clear cut to make way for flooding, and a Manitoba Hydro construction hat was nailed to a tree at their dad's old camp when the film crew arrived.

“They’re destroying our home,” says Marilyn Mazurat, another of the sisters.

In 2009, the Tataskweyak people voted 61 percent in favour of becoming partners in the dam. The centrepiece of the partnership was an opportunity for Tataskweyak and three other first nations to purchase a combined 25 percent share in what was expected to be a lucrative mega-project. Since then, project costs have soared, the completion date has been pushed back by almost two years, and the export market—which the dam requires to be profitable—has tanked. Manitoba Hydro now assumes the first nations will end up with a 2.17-percent share in the dam, instead of 25 percent.

A particularly sharp point of pain for the family relates to their late brother, Leon. Since he could not speak, he had a special place in the family, and the siblings all watched out for him. Despite that, while the kids were sledding one day, he wandered off and fell through the ice when he was 7. Although it has been three decades, the fact that his body was never found adds to the large and lasting hole that his death left in the family.

For the rest of their father’s life, he would scan shorelines in the area for any trace of his son. Today, a cross stands on “Leon’s Island” near the place where he drowned. But the trees around it have been cleared to make way for water. The memorial will have to be moved, re-opening the wound and adding salt to it.

For Love of a River also tells the story of Cree elder Ellen Cook, who grew up in the shadow of another dam in northern Manitoba. Looking over the dry, silent riverbed that was once the site of the roaring Grand Rapids, for which her home community was named, she speaks of the decades of grief caused by the dam. Cook, who serves as co-chair of the Interchurch Council on Hydropower, concludes the film by saying that concrete does not last forever: “It’s eventually going to get old and it’s going to die. And then the river shall flow again.”

For Love of a River can be viewed online at hydrojustice.org.

See also:
River dams and land claims
Land is the heart of the matter
Beyond guilt and lament 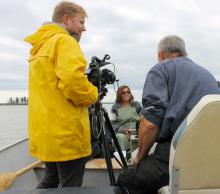