‘This will lead to dancing’

Theatre of the Beat to tackle sexuality in new play 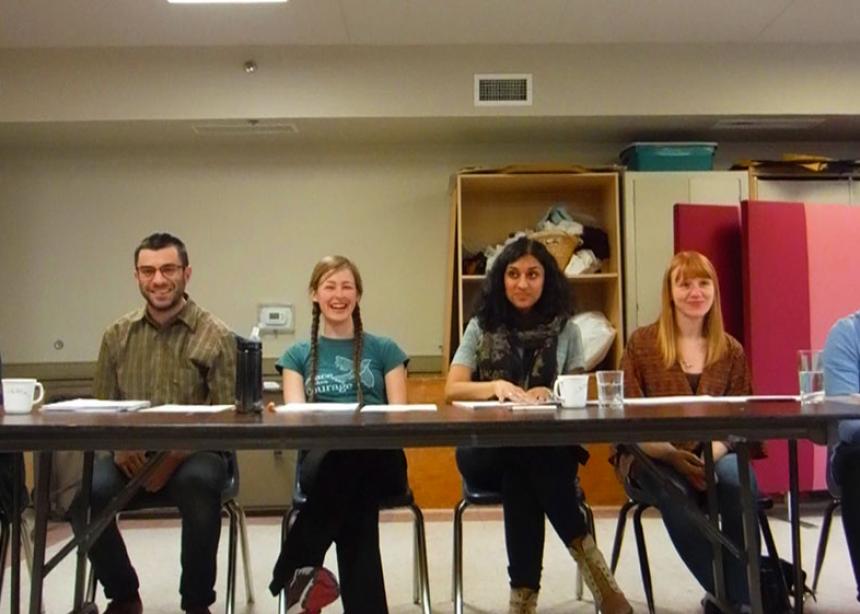 The company says it’s one of the most radical plays it’s ever undertaken. This Will Lead to Dancing is an original play about LGBT inclusion in the church.

“We’re trying to figure out why our sexuality and spirituality are supposedly sworn enemies of each other,” explains Johnny Wideman, the creative director of the theatre company and the playwright. Wideman, 27, attends Community Mennonite Church in Stouffville, Ont. He says the company has often been asked if they will broach the subject of homosexuality in the church.

Wideman is in the process of writing the play that centres around two youth who decide to go on a hunger strike at their church, camping out in their youth room to draw attention to the subject. The teenagers get significant media attention for their efforts, and before long the world is watching this small church to see how it handles the situation.

Wideman says he interviewed a number of people from the Mennonite LGBT community and is using their stories to inform his writing.

“They’ve shared their stories and insights as well as struggles, insecurities, and hopes. Those stories have become the backbone of the play,” he says.

Rebecca Steiner, 25, attends Fort Garry Mennonite Fellowship in Winnipeg and is the general director of the theatre company. She says all of the company’s other plays have been sponsored by Mennonite Central Committee, Mennonite Church Canada, or Mennonite post-secondary institutions. This Will Lead to Dancing is the first independent production that Theatre of the Beat has undertaken that the company plans to tour extensively.

Theatre of the Beat is seeking charitable status so it can apply for grants and subsidies to continue its unique kind of theatre. It’s also hoping to raise money to fund this particular play.

The Mennonite church has been at odds like this before. However, Wideman and Steiner say the conflict surrounding same-sex relationships, marriage, and inclusion is a hot topic lately. Wideman says Theatre of the Beat is no stranger to addressing contentious subjects like this. He says the company is ready to get its hands dirty, and theatre is a unique way to approach peacebuilding.

“We build walls with our emotions, or we build walls with our theology, and theatre brings those walls down,” he says. “Typically we don’t get to see real emotion. We’re very guarded people and we don’t always share our stories, but in theatre, because they’re characters and because it’s dramatized, we’re allowed to engage in those stories more vulnerably and honestly,” he adds. The theatre company hopes the play will be a way to forge ahead in the debate and help people to budge from their entrenched views.

Steiner and Wideman say they’re a bit nervous to undertake such a play but feel compelled to enter into the dialogue because it’s a social justice issue.

“For us to turn a blind eye to injustice and to not use our skills for those things would be a big no-no for us,” Wideman says. “It’s part of our calling.”

Theatre of the Beat’s first, and arguably most popular play, Gadfly, follows the story of Sam Steiner from marching with Martin Luther King Jr. to dodging the draft during the Vietnam war. The story is based on actual events and follows the main character as he tries to make sense of his faith in the challenging political landscape of the day.

A gadfly is a person who upsets the status quo by posing upsetting or novel questions; that’s exactly what the members of Theatre of the Beat work to do.

“It inspired our aesthetic. It inspired us to be gadflies in today’s context,” says Steiner, who wrote and directed Gadfly.

The company did a read-through of the first draft of the new script recently and asked a small group of people for feedback.

“We don’t want it to alienate people, and hope this won’t be a cause for a loss of support. We want the play to build bridges and get people talking,” Steiner says.

Theatre of the Beat hopes to do a national tour of This Will Lead to Dancing this fall. For more information, or to host a performance at your church, visit the website at www.theatreofthebeat.ca.

See a review of the play at: "A prophetic voice for the excluded."

Not sure I'm old enough to have dodged the draft in World War II. That would put me in my 90s, and I don't feel that old!

Thanks, Sam. We have now placed you in the right time period.

I learned the joke as, "why do Mennonites not have sex standing up? Because it could lead to dancing." Implication as to which is worse?
And the song from "My Fair Lady" turned into, "I could have danced all night, but I was Mennonite, instead, we went to bed."

Seems to me you have the dancing and sex joke backwards: The version I've heard and enjoyed for several decades is: "Why don't Mennonites have sex standing up? Because it might lead to dancing."