‘The price for your glory is their suffering!’

Directed by Martin Scorsese. Based on the novel by Shusaku Endo. Starring Andrew Garfield, Adam Driver and Liam Neeson. A Paramount Pictures release, 2016; now vailable on DVD and Blu-ray. Rated PG for violence. 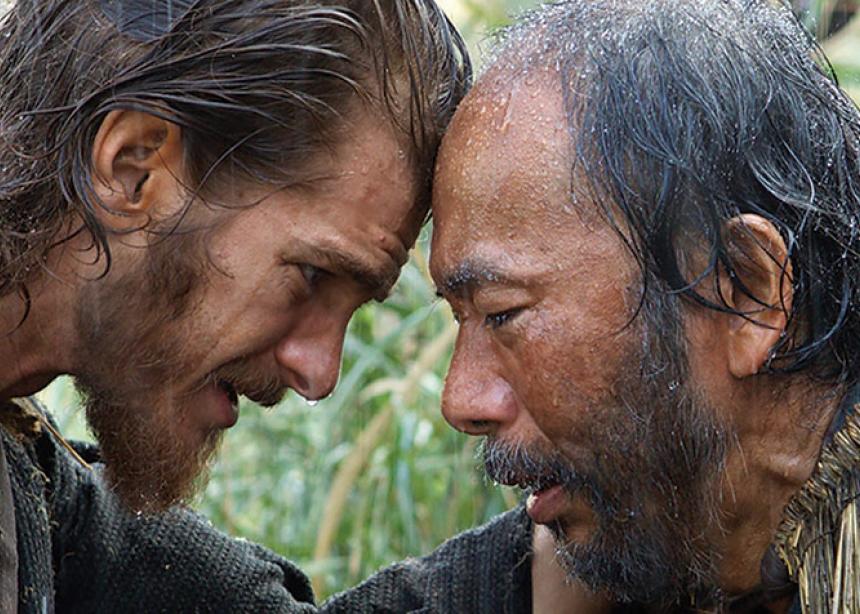 Why is God so silent? Why doesn’t God hear the prayers and stop the endless suffering of believers? These are the questions that lie behind the title of Martin Scorsese’s epic film about Jesuit priests in Japan in 1640.

Silence stars Andrew Garfield as Father Rodrigues, a Portuguese Jesuit who comes to Japan in 1640 in search of his mentor, Father Ferreira (Liam Neeson). Ferreira is rumoured to have renounced his faith and married a Japanese woman, something Rodrigues refuses to believe. Accompanying Rodrigues on his search is Father Garupe (Adam Driver), a passionate priest who always seems to be living on the edge, which is particularly challenging when you arrive in a country whose isolationist government is killing off all Christians who refuse to recant.

In the decades prior to 1640, more than 300,000 Japanese had been converted to Christianity by Jesuit missionaries. By the time Rodrigues and Garupe arrive, only a few pockets of Christians remain, tucked away in remote communities, although these are also threatened by the infamous Inquisitor (Issey Ogata), who utters the words of this review’s title. In the weeks and months ahead, Rodrigues and Garupe will experience incredible highs as they encounter groups of believers who are thrilled by their arrival, and incredible lows as they watch believers tortured and executed for their beliefs while feeling powerless to stop it.

The lows will challenge their own beliefs. Rodrigues, in particular, begins to struggle with his doubts and with God’s unending silence, placing him in a vulnerable position when he finally meets the Inquisitor and the Inquisitor’s interpreter (Tadanobu Asano).

The interpreter, in particular, presents the voice of calm reason, suggesting to Rodrigues that Buddhism is much better suited to the needs of the Japanese people than Christianity. However, to me, the Buddhists come across as cruel and often hypocritical themselves.

One of the failures of the film is this ambiguous depiction of faith/belief. There is no convincing case made for any faith, and yet faith seems to be particularly lifted up in Silence. For example, the question of why Jesuit missionaries are desperate to bring Jesus to Japan is never adequately addressed. Is it just the misguided obsession with saving people’s souls from an eternity in hell?

Silence is dedicated to Japanese Christians and their pastors, but I found that dedication almost as confusing as the film itself. Is Scorsese trying to say that he admires the Jesuit priests who sacrificed so much to try to bring Jesus to Japan, or that he thinks they were doing a great thing and that the small number of Christians who remain in Japan are a testament to their courage and commitment?

There are many things that make Silence a superior film. The cinematography is sublime and helps to create the film’s many breathtaking scenes. The acting is generally quite strong, especially in the case of some of the Japanese actors, like Asano and Yosuke Kubozuka, who plays Kichijiro, a comedic Judas figure who is a constant thorn in Rodrigues’s side. But while the Japanese actors may have performed well, I frequently questioned the choice of words and actions for their characters.

If it sounds like I have mixed feelings about Silence, that is correct. Insofar as the film is about Rodrigues’s spiritual doubts in light of the Japanese context he is facing, Silence is a hauntingly profound film. However, insofar as it is supposed to convey any kind of message about faith and about what is really driving the characters, I am left confused and unconvinced, with endless questions, like:

• How does the Catholic Inquisition of the Middle Ages relate to the Japanese Inquisitor?
• Why is the recanting of faith so often depicted in a positive light?
• Why is the work of the Jesuit missionaries shown to be both so positive and so useless? Did the converts worship the sun instead of the son?
• Why are the references to colonialism so subtle?
• Are all the Jesuits in the film to be viewed as heroes?
• Is it supposed to be viewed as positive that Christianity survived in such an inhospitable environment?