Coming from a place of love

Young Chippewayans invite Mennonites, Lutherans to a gathering of friendship at Stoney Knoll 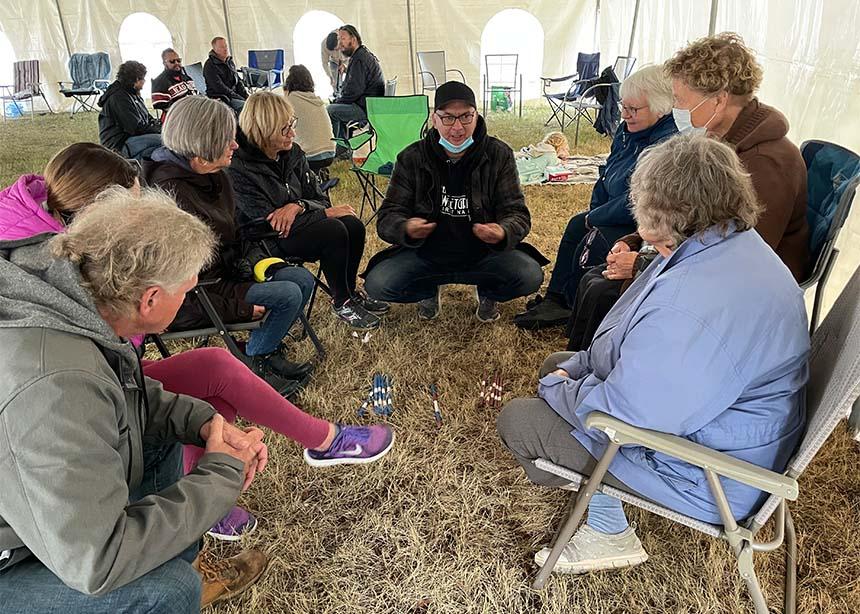 One by one, they slipped inside the large tent, out of the drizzle. They came from far and near to hear stories, share a meal, play games and enjoy each other’s company.

On Aug. 24, the Young Chippewayan First Nation welcomed Mennonites and Lutherans from Laird and the surrounding area to a gathering of friendship at Stoney Knoll, the fourth gathering of its kind.

“We’ve come together to reassure non-Indigenous people,” said Gary LaPlante on behalf of the Young Chippewayan people. “We’re not here to displace anybody. These are truly friendship gatherings.”

And friendship truly defined the day. As a light rain continued to fall outside the tent, inside people set up lawn chairs around the perimeter and chatted with their neighbours. They exchanged warm greetings with old friends and introduced themselves to newcomers.

LaPlante and Randy Klassen, the coordinator of Mennonite Central Committee Saskatchewan’s Indigenous Neighbours Program, served as emcees, welcoming everyone who had come and introducing the day’s speakers, singers and storytellers.

Hot homemade soups, bannock and Mennonite-style farmer’s sausage warmed participants at midday, and then the games began. Delano Kennedy of Sweetgrass First Nation, near Gallivan, Sask., taught participants a variety of games that Indigenous children and youth used to play. Games using string, rope or pocket knives were played to develop dexterity and strength, and simply to have fun.

Hand games continue to be popular in many Indigenous communities. In a guessing game, one player holds two small “bones” in closed fists. One “bone” is striped and the other is plain. A guesser on the opposing team tries to guess in which hand the hider is holding the plain bone. If successful, the guesser’s team gets one of 12 sticks as a point. If unsuccessful, the hider’s team gets a stick. The first team to get all 12 sticks is the winner.

Three groups of players, taught by Donavan Arcand, Kirkland Weenie and Kim Weenie, tried their hand at hand games, with both confusion and laughter ensuing.

Outside the rain ended and, to close the day’s activities, Chief Sylvia Weenie led participants in a friendship dance.

Gatherings like this one have taken place at Stoney Knoll every five years since 2006. The first year, representatives of each of the three groups—the Young Chippewayan, the Mennonites and the Lutherans—signed a memorandum of understanding, stating that they would continue to work together to redress the wrongs of the past.

Stoney Knoll was also once the site of St. John’s Lutheran Church. Although the congregation eventually moved its church building to Laird, it retains title to the land and maintains its church cemetery there.

“I’ve had people asking me for permission to be here,” said St. John’s pastor, Jason Johnson. “That doesn’t sit right with me. I never ask my children for permission [to visit], I just go see them.”

Thirty years later, Young Chippewayan Chief Ben Weenie approached the Mennonites and Lutherans to discuss the possibility of having a party at Stoney Knoll. He and LaPlante assured farmers that they didn’t want to take the land away from them. This was to be a gathering for building friendship and trust between the two groups.

When Ben Weenie died in 2016, his wife Sylvia became chief. She and her children carry on his vision of friendship.

“When we mix two nations, it’s important to remember to come from a place of love,” said daughter Kim Weenie. She spoke of how her father responded to conflict. “Dad always shook hands and walked away with a smile,” she said, adding that those who attended the first Stoney Knoll gathering in 2006 had come together from a place of love. “That was before the [Truth and Reconciliation Commission], before reconciliation became a common word,” she said. “I’m grateful we’re still here, still laughing together. Dad lives on in everybody here.”

Wilmer Froese, who farms nearby, responded to Kim’s words. “Your dad’s love is what made this possible,” he said. 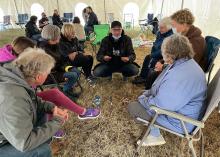 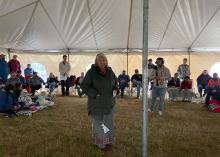 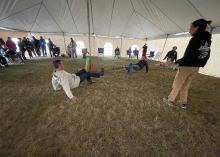 Delano Kennedy, standing right, gives last-minute instructions as Randy Klassen, on the ground left, and Logan Janzen prepare to face off in a rope tug-of-war. This game is one of many that Indigenous children and youth used to play to test their skills and strength. (Photo by Donna Schulz)