Living the good news in many ways 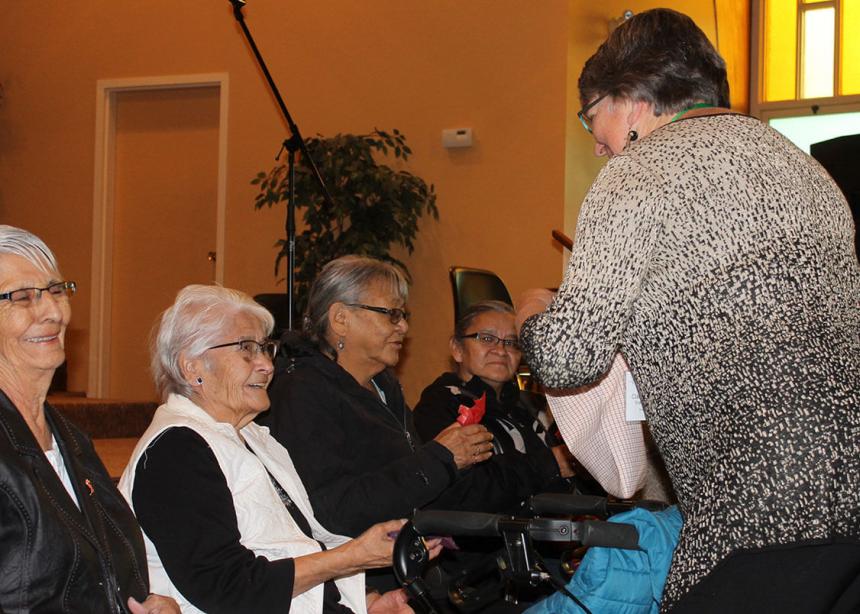 With titles such as “Don’t be a culture monkey” and “I saw an orange glow on the horizon,” participants at Mennonite Church Saskatchewan’s annual Equipping Day had a difficult time choosing which workshops to attend. And with 11 workshops on offer in three time slots, there was much to choose from.

“Living the good news with Jesus” was the theme of the Oct. 22, 2016 event, which kicked off with a time of singing and Bible reading with Bryan Moyer Suderman of SmallTall Music in Kitchener, Ont. By closely examining Matthew 12, Suderman showed participants how Jesus helped his audience correlate their experience with the Old Testament.

Terri Lynn Paulson-Friesen, pastor of faith and community at Osler Mennonite, and Garth Ewert Fisher, pastor of Mount Royal Mennonite in Saskatoon, led a workshop called “Church and the community,” in which they asked participants to explore what it means for a church to be present in, and minister to, its community. Ewert Fisher noted that his is “a parking lot church,” with members driving to church from neighbouring communities. He wondered what it means, in that context, to be a community church. “Community ministry does not equate with church growth,” Paulson-Friesen cautioned, adding, “We need to put friendship at the centre, at the heart of community ministry.”

With division within the church being the elephant in the room, Claire Ewert Fisher’s workshop, “The emotionally healthy church,” seemed a timely topic. Citing Peter Scazerro’s book of the same title, she suggested that emotionally healthy churches consist of members who are willing to be honest when confronting themselves and their past, and to live with brokenness and vulnerability. “Make incarnation your model for living well,” said the pastor of Grace Mennonite in Prince Albert. “Enter into other people’s worlds by listening.”

Harry Lafond, executive director of the Office of the Treaty Commissioner, along with some women elders from the Muskeg Lake Cree Nation, introduced participants to indigenous culture with a workshop called, “So you’re going to a powwow—now what?” With humour, the women shared the meaning of the powwow, and spoke of how dancing is a way of praying to the Creator for healing. “We all pray to the same Creator, we just pray in different ways,” said Martha, one of the elders.

“A lot of romance happens at a powwow, and a lot of socializing,” said Lafond. “It is a gathering time that pulls us together as people.”

Leona, another elder, urged the participants to “come to our powwow. We’ll show you how to dance.”

Enthusiasm for the various sessions spilled over at the town hall meeting at the end of the day. One participant said there were too many good workshops to choose from, and asked whether some of them could be repeated next year.

Another asked, “Is there a way we could market this to younger folks?” In response, the event’s organizers promised a greater presence on social media leading up to next year’s Equipping Day.

About the video: Elaine, a member of Muskeg Lake Cree Nation, uses a simple song to teach participants some common phrases in the Cree language.