Delegates explore theme of generosity while looking to the future 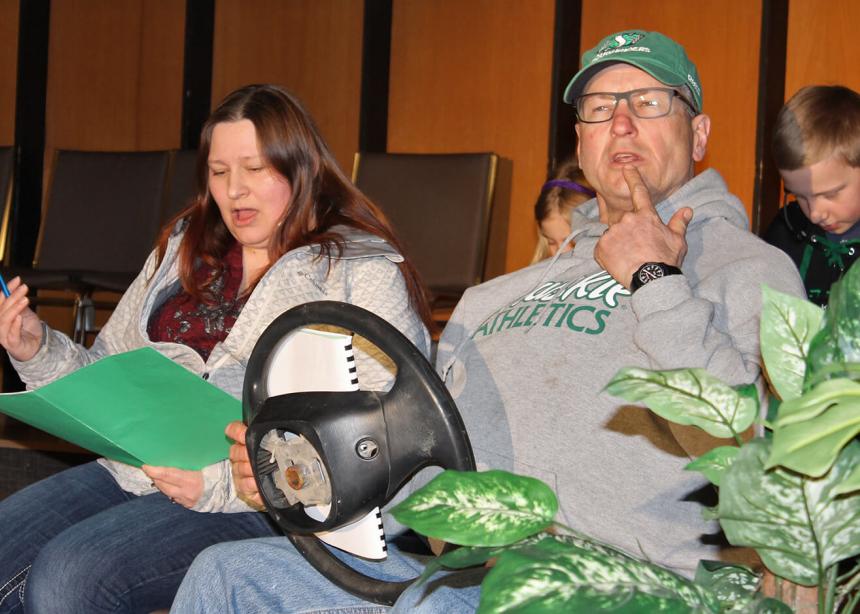 “Extending the table: Enough for all.” That was the theme chosen for Mennonite Church Saskatchewan’s annual delegate sessions this year, and as delegates and guests broke bread together, literally and metaphorically, they found there was indeed enough for all.

Held March 10 and 11, 2017, at Nutana Park Mennonite Church in Saskatoon, the sessions were co-hosted by the Nutana Park and Pleasant Point Mennonite congregations.

The March 10 evening worship featured a play, The Gospel According to Food, which was written and performed by members of Pleasant Point Mennonite along with friends from other congregations. In the play, a family addicted to junk food takes a closer look at their relationships with food. Along the way, the family discovers that food shared with friends can bring them into the presence of God.

Susanne Guenther Loewen, pastor of Nutana Park, spoke about what the Bible has to say about sharing food. “Other meals are just as sacred as communion,” she said. That’s because “God becomes present in the gathered people.” As they eat together, “the community becomes transformed into the body of Christ,” she said.

In her second message, Guenther Loewen addressed the topic of sharing with those who don’t have enough. “God depends on our sharing when we have more than enough to eat, to provide for those who don’t have enough,” she said. “ ‘Do this in remembrance’ both is and is not a reference to communion,” she added. “Transform the world by extending the table. This is what we are called to do in remembrance of our generous God.”

Business was also on the menu at the annual gathering. Mennonite Church Canada’s transition coordinator, Keith Regehr, presented the plans and proposed covenant for the new national body. The questions and comments delegates offered Regehr seemed to also reflect the theme of extending the table.

Eric Olfert of Mount Royal Mennonite in Saskatoon echoed Epp’s point of view. “How do we nurture our sense of family?” he asked, suggesting, “We need family reunions across the country.”

Regehr replied that this need for solidarity, or family gatherings, is “part of the reason for the shift to annual, rather than bi-annual, gatherings,” but, he added, “there are far more ways than national gatherings of shaping unity.”

Florence Driedger of Peace Mennonite in Regina wondered, “How can we reflect the growing racial and cultural diversity [of the] church?” To which Regehr admitted, “The current leadership doesn’t reflect this diversity.”

Brent Gunther of Nutana Park asked, “How do we bridge the gap between our churches and those who have different understandings of what it means to be Mennonite or Anabaptist?” Regehr replied, “I think that comes under rubric of what it means to strengthen local congregations.”

Even the budget deliberations were a reminder that there is enough for all. Finance chair Gordon Peters explained that funding for the area church’s three camps had been removed, resulting in a surplus of $9,418. Reinstating the funding as it had been in 2016 would result in a $5,000 deficit.

Ike Epp of Hoffnungsfelder Mennonite in Glenbush said, “If the camps do not receive the subsidy this year, they will survive, [as it represents] a lot smaller percentage of their budgets than it was years ago.”

But Christy Martens-Funk of Osler Mennonite was uncomfortable with removing the subsidies entirely. “I have difficulty with cuts because there is still a surplus,” she said. “I would be in favour of designating the surplus toward the three camps.”

Ultimately, this is what delegates decided to do.

Area church minister Ryan Siemens announced that MC Saskatchewan has contracted Betty Pries of the L3 Consulting Group to help the church set a direction for the future. Dubbed “Refresh, refocus, renew,” the process will begin immediately with a survey of congregations. A mini-retreat, to be held at Mount Royal Mennonite in Saskatoon at the end of April, will engage the results of the survey. A second mini-retreat is being planned for September. The final phase of the process will take place at next year’s annual delegate sessions. An appointed committee made up of Martens-Funk, Pauline Steinmann, Josh Wallace, Siemens and Kirsten Hamm-Epp will work closely with Pries throughout the process.

Christy Martens-Funk describes the visioning process Mennonite Church Saskatchewan will undertake this year under the direction of Betty Pries of the L3 Consulting Group. Martens-Funk is a member of the committee appointed by the area church to work closely with Pries throughout the ‘Refresh, refocus, renew’ process. (Video by Donna Schulz)

Understanding issues related to food insecurity is one thing, knowing how to respond to those issues is quite another. About 40 participants gathered at Saskatoon’s Station 20 West to learn more about “The politics of food: Feeding ourselves and the world, faithfully.”

Patrick Preheim, a pastor of Nutana Park Mennonite Church, and Gord Enns of the Saskatoon Food Council hosted the workshop, which was held March 10, 2017, in conjunction with Mennonite Church Saskatchewan’s annual delegate sessions. Enns said the idea for the workshop sprang from a number of sessions he facilitated with Nutana Park’s adult Sunday school class.

“I wanted to give people a sense of the complexity of the issue,” he said, “and to engage people in conversations and learning.”

The learning began with a tour of Station 20 West. The inner-city facility is home to a café and numerous service agencies working together to help meet the needs of low-income families.

The bread and the cup graced the communion table at Nutana Park Mennonite Church during MC Saskatchewan’s recent annual delegate sessions, along with jars of preserves and a basket of corn reflecting the event’s theme: ‘Extending the table: Enough for all.’ (Photo by Donna Schulz) 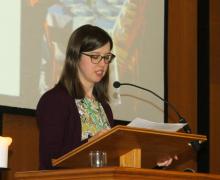 Susanne Gunther Loewen reminded those at MC Saskatchewan’s annual delegate sessions that “’our God is generous, welcoming, always making room for more at the table.’ (Photo by Donna Schulz)