More on seasonal workers in Canada 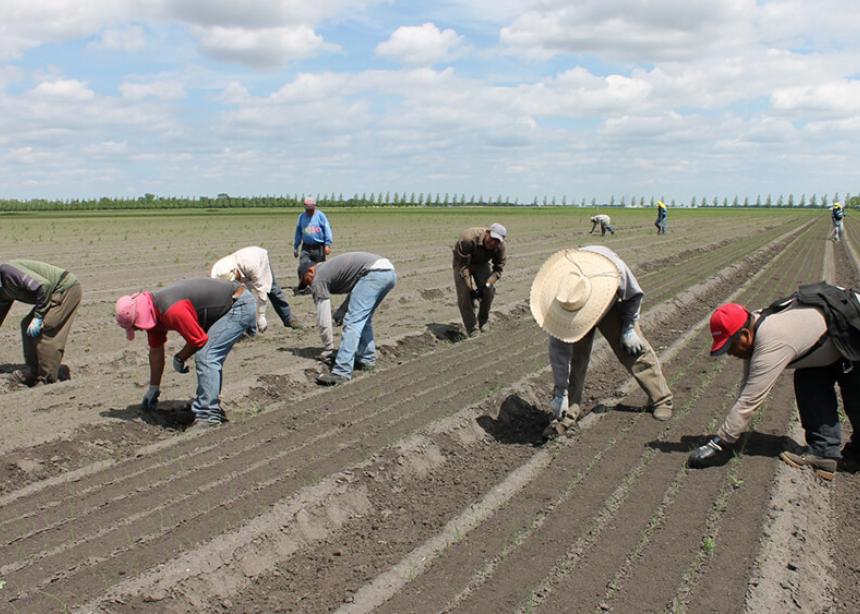 This online supplement accompanies the feature, “The lucky struggle,” about workers in the Seasonal Agricultural Workers Program (SAWP).

In 2008, the Jeleel Stewart’s hand was crushed by a forklift at a greenhouse operation in Ontario. The Jamaican worker in the Seasonal Agricultural Worker Program (SAWP) could not return to work.

Until 2010 Stewart received some benefits and therapy through the Workplace Safety and Insurance Board (WSIB) of Ontario. When doctors determined that he would permanently lose use of the hand, WSIB cut him off completely.

Married with five children, Stewart lost his house. He tried farming but got hit by drought, in addition to the challenge of farming with one hand. The constant pain he endured got worse after the therapy stopped in 2010.

Diabetes has complicated matters. Without money for supplies to test his blood sugar levels or to buy healthy food—the inexpensive fallback was starch-based foods that exacerbated his condition—and his health deteriorated dangerously.

The Canadian system that welcomed his hard work—as well as his payments into Employment Insurance—will not take responsibility for the consequences of an injury he sustained while contributing to our economy on our soil.

Jane Andres of Niagara-on-the-Lake got to know Stewart before his accident. She has even visited him, along with many other SAWP workers, in Jamaica. Andres speaks with Stewart’s wife weekly, as his situation becomes more desperate. When a phone call comes in from Jamaica, she hesitates to pick it up, fearing the worst. She is trying to raise money for Stewart’s family.

Andres feels that Stewart, and some others like him, have been treated as a “disposable workforce.”

For a five-minute video by Andres about Stewart’s story see “Jeleel’s Story.”

The treatment of injured and sick SAWP workers was highlighted by recent national coverage of the case of Sheldon McKenzie. In 2015, McKenzie, from Jamaica, suffered a serious head injury on the job near Leamington, Ont. His family members say the Jamaican liaison officer pushed to have him sent back to Jamaica as soon as possible—a practice called medical repatriation—even though they say he was medically unfit to fly and needed medical attention in Canada.

According to a CBC report, because he was no longer able to work, “he lost his work visa and no longer qualified for health-care coverage.”

McKenzie’s family, including relatives in Canada, had to intervene to have him kept in a Canadian hospital. Some months later, he died of his injuries.

Critics of SAWP say that this case illustrates the vulnerability of the workers. Some workers are treated well and receive health care they need, but they have very limited power in the program—employers and country “liaison” workers can send people home or not call them back the next year—leaving workers vulnerable if they do face mistreatment.

CBC reported the following in May of this year.

From that report: “A CBC investigation into the treatment of a seasonal agricultural worker from Jamaica, who had been coming to Canada to work for 12 years, revealed that more 800 migrant farm workers had been sent home in the last 10 years just in the province of Ontario alone. Many of them with medical conditions due to injuries sustained on the job in Canada.”

Watch their video about the benefits of the program.

Read the FARMS May 20, 2016, press release here. It says that without SAWP, “many of these growers simply couldn’t stay in business and that would destroy an industry that’s crucial to our economy. . . . Recent labour market research by the Canadian Agricultural Human Resource Council cited SAWP as a key reason Ontario’s horticulture industry is able to generate $5.4 billion in economic activity and approximately 34,280 jobs.”

John Deere’s magazine, The Furrow, published an article about SAWP in 2015. Read it here.

MCC: The future of its SAWP involvement

For the 2013 and 2014 seasons, Mennonite Central Committee Ontario (MCCO) hired Rachel Pellett Gillette to work directly with Seasonal Agricultural Worker Program (SAWP) participants in the Niagara region. By all accounts, she developed significant connections to many workers, and they valued her presence and work.

After the 2014 MCCO discontinued the program. Rick Cober Bauman, executive director of MCCO, said that, if the organization would have had the funds to pay Pellett Gillette, they would have continued. He noted a lack of “uptake” on the part of local churches as an important factor. While churches in the St. Catharines and Vineland area have been involved with SAWP participants, the same has not true to nearly the same extent in the Niagara-on-the-Lake area.

Speaking by phone from his office in Kitchener, Ont., Cober Bauman said this MCC involvement was “a really hard one to end.” He is open to restarting it. “My hope is that we can reopen some good and positive engagement [with SAWP participants],” he said. “It fits with our overall commitment to uprooted and vulnerable people.”

But the reality is that, if the program is restarted, it won’t happen soon. In part due to the organizational effort now devoted to the resettlement of Syrian refugees, Cober Bauman says there is no expectation of restarting it this year.

Cober Bauman noted that MCC’s involvement with SAWP has been a sensitive matter for some farmers, but MCC’s focus has been on a collaborative approach.

A federal government spokesperson provided information on work permits issued as part of SAWP. In 2015 a total of 30,579 workers participated in the program, with 21,279 workers coming from Mexico, and 9,300 workers from the Caribbean region (7,713 of those from Jamaica).

Distribution throughout the provinces:

The Parliamentary Committee on Human Resources, Skills and Social Development and the Status of Persons with Disabilities recently held hearings on SAWP and the broader range of Temporary Foreign Worker programs (a review initiated by the previous government). The hearings concluded in June and, according to the clerk of the committee, the resulting report “should be tabled in the House and published on the Committee’s website before the summer.”

I asked the Employment and Social Development Canada—the federal department responsible for SAWP—why SAWP workers and their employers are required to pay into Employment Insurance although the workers are not eligible to receive most EI benefits. A federal spokesperson said via email that SAWP workers pay EI just like Canadian workers and face the same eligibility requirements, which includes “being available for work and capable of accepting work.” That’s tough when you live in a different country.

However, “workers do not have to demonstrate availability for work in Canada to receive other EI special benefits, such as maternity, parental, compassionate care, or parents of critically ill children benefits. Workers who have a valid Social Insurance Number (SIN) may receive these special benefits even if they are outside Canada.”

I asked for data on how much SAWP participants pay into EI collectively and how much they received in EI benefits in the past year. A government spokesperson said that information is not collected. Information on how many SAWP employers were investigated for possible wrong doing was not provided “to protect the integrity of the program.”

I asked what accountability mechanisms (such as inspections and/or reporting) are in place to ensure the well-being of the workers in SAWP. I received the following reply:

“Temporary foreign workers who are in Canada are protected by all the same rights and protections as Canadians.

“Employment and Social Development Canada (ESDC) takes the integrity of the TFW Program very seriously and will not tolerate any abuse or misuse of the Program. ESDC has authority to visit employer worksites and inspect employer activities to ensure they are meeting Program conditions. Non-compliant employers may be subject to administrative monetary penalties ranging from $500 to $100,000 per violation, up to $1 million in a one-year period, and/or temporary or permanent bans from the Program.

“In addition, provinces and territories are responsible for establishing health, labour and workplace safety standards for all workers, including TFWs. The TFW Program requires that employers register foreign workers for provincial/territorial health insurance and workplace safety insurance as soon as they are eligible, and to ensure that the worker is covered by equivalent private insurance for any periods when a foreign worker is not eligible.

“In addition, the Government operates a confidential tip line where TFWs or other interested parties are able to report situations of abuse. All allegations of abuse received are reviewed and appropriate action taken.”

I subsequently asked how often the department has taken action against employers, but I did not receive a reply before filing this story.