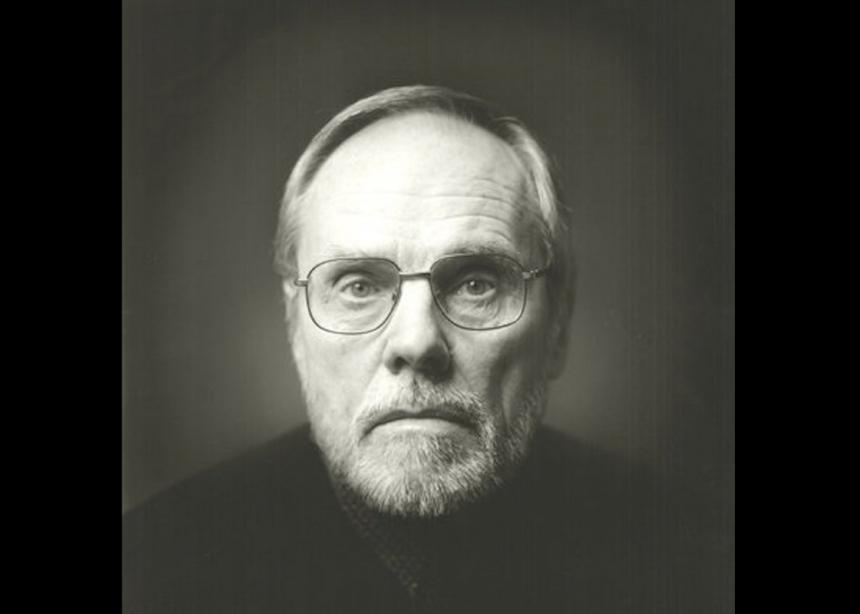 Fifty-seven years ago, a young Mennonite author published a book that turned the Canadian Mennonite world upside down.

That author was Rudy Wiebe, and the book was Peace Shall Destroy Many, the first novel written in English by a Mennonite about Mennonites in Canada. The book, which offered an honest and pointed portrait of Mennonite life on the Prairies during the Second World War, provoked a great deal of anger and pain.

“It was hard on them,” says Wiebe, now 84, of how it impacted some members of his denomination. “It was a tough story.”

In the book, Wiebe explored how Mennonites in the fictitious community of Wapiti, Sask., opposed the war while, at the same time, their church was divided by conflict and broken relationships.

“It was difficult for the older generation to handle,” he says of the book, which he once described as a “bombshell” for many Canadian Mennonites. “They didn’t speak English, they weren’t accustomed to reading fiction, and they didn’t share insider problems with the outside world,” he shares.

As the criticism mounted, Wiebe knew he couldn’t stay editor of the Herald. “I wasn’t fired, but I resigned before they would have fired me,” he says. “There was no question. I couldn’t continue.”

That decision led to a distinguished 25-year career as a professor of English at the University of Alberta, and as an award-winning author of 33 books, anthologies and collections of essays about faith, life on the Canadian Prairies, and about western Canada's Indigenous peoples.

Along the way, Wiebe was a two-time recipient of the Governor General's Award for Fiction; he also received the Writer’s Trust Non-Fiction Prize and the Charles Taylor Prize for his memoir of growing up in Saskatchewan. In 2000, he was named an officer in the Order of Canada.

On April 4, Wiebe received another honour when he was given the Pax Award from Canadian Mennonite University (CMU).

The award, created to honour people “who lead exemplary lives of service, leadership and reconciliation in church and society,” was given to Wiebe for how “his works have been critical in exposing societal concerns,” and for “the patience and empathy his works awaken,” according to CMU president Cheryl Pauls.

For Wiebe, the award from CMU was “particularly welcome” since it is coming from his own faith tradition. “I have received many other awards, but to get an award like this from my own community is really important to me,” he says.

While the award is called Pax, meaning “peace,” he notes that when Peace Shall Destroy Many was published “it destroyed peace for many.” But, because of it, “I have never been able to stop writing, not for the rest of my life."

Despite how some Mennonites responded to Peace Shall Destroy Many, Wiebe never became angry with the church nor lost his faith. Although the mainstream writing world is a quite secular place, Wiebe is quite happy to call himself a Christian writer.

“That means I'm a believer and a follower of Jesus Christ,” he says. “I try to look at the world in the way Jesus tried to teach us.”

That doesn’t mean he has faith all figured out or that he lives perfectly as a Christian. Living faithfully is “sometimes hard to maintain,” he says.

His understanding of his faith has also changed over the decades. “We live as Christians in a world that keeps changing,” he says. “You just can’t go plodding along thinking I know what's right and what we’ve been taught for the last 500 years or something like that is the only right thing.

“The world changes, and you need an imagination to understand that. You can't just say that certain practices today are out the window because they didn't they didn't exist in Jesus’ time. This is where the imagination and spiritual discernment are important.”

As for whether being so open about his faith has ever hurt him as a writer, Wiebe says no.

“People kept publishing my books,” he says, noting Peace Shall Destroy Many has never gone out of print and is still taught in high schools.

“There was never any question about what my approach to the story was, and they didn't object my philosophy in life. Nobody objected to me [about my faith] in terms of the publishing world.”