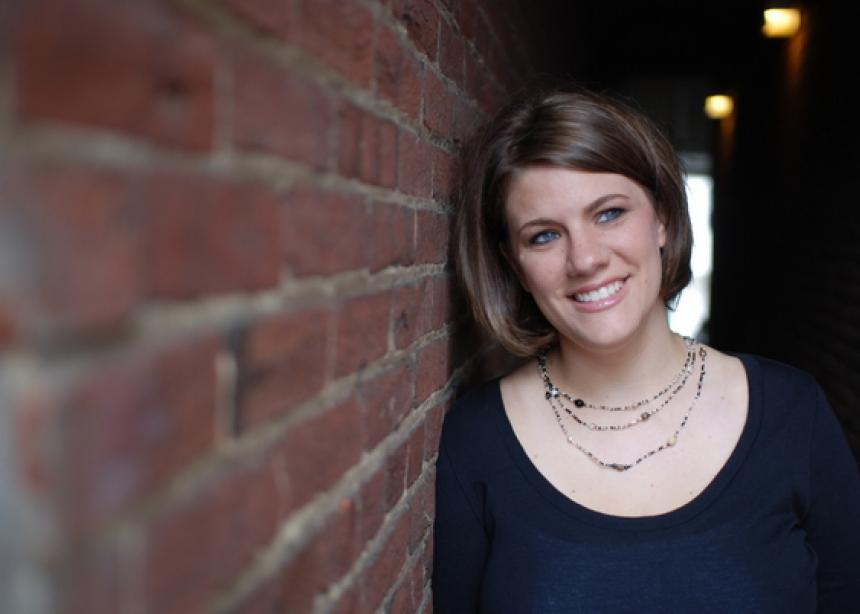 When Rachel Held Evans died on May 4 at the age of 37, it shocked the thousands of people who follow her work.

Through her four books, blog, social media presence, speaking events and podcast appearances, Evans “challenged conservative Christianity and gave voice to a generation of wandering evangelicals wrestling with their faith,” as the New York Times noted.

Canadian Mennonite asked six people to reflect on what Evans’s work has meant to them.

Did Rachel Held Evans impact your faith journey? Let us know in the comments.

Emma Hamm: ‘Her work let me know that I wasn’t alone on this journey’

When Winnipegger Emma Hamm was reevaluating her childhood beliefs, Evans gave her language for the “deconstruction and reconstruction of my faith.”

Evans provided Hamm with tools to re-examine the Bible, gave the 26-year-old social worker her first taste of feminist theology and showed her “the importance of having people from various faiths speak into our theology.”

“Rachel Held Evans’s work let me know that I wasn’t alone on this journey, and [that] God was in it just as much as if I wasn’t changing the whole way I viewed my faith,” says Hamm, who attends Hope Mennonite Church.

“As I continue to reconstruct my faith, Rachel Held Evans provided me with gifts of truth-telling; recognizing women as important to the church; not being afraid of asking questions whether you always get answers or not; and being outspoken about the voices marginalized in the church, and finding ways to make those voices heard.”

Kyle Penner: ‘I’m thankful she pushed me to pass the mic’

For Kyle Penner, the fact that Evans was “relentless in her affirmation” of people on the margins stands out.

Penner heard Evans speak in Chicago, Illinois at Why Christian 2016, a conference she co-hosted, where all the speakers were either women, people of colour or from the LGBTQ community.

“She asked them to simply share why they [are] still Christian,” recalls Penner, 35. “If Christianity historically sidelined, oppressed and marginalized your voices, why are you still here? It was beautiful.”

Directly because of that experience, Penner—who is the assistant pastor at Grace Mennonite Church in Steinbach, Man.—works hard to give the microphone in his church to similar voices.

“I have a long way to go, but I’m thankful Rachel Held Evans pushed me to pass the mic as often as I can.”

Jon Brandt: ‘She was able to help her readers stay focused on Christ’

Jon Brandt engaged with Evans’s work through her blog and Twitter feed.

“This is how I will miss her most,” says Brandt, a philanthropy consultant who attends Toronto United Mennonite Church. “Being able to read her take on the latest disheartening or soul-sucking action by a major religious leader, to be able to mourn [with her], laugh and see a path forward. Finding with her, and others within her community, a commonality, a connection.”

At 48, Brandt isn’t a millennial, but Evans’s work resonates with him nonetheless. Evans knew and expressed “what it was like to love Christ and be frustrated by the church,” he says.

“Rachel Held Evans’s work is important because she was able to speak truth to power, to articulate what it could mean to love Christ, be socially engaged and reject the evangelical mainstream,” Brandt says. “She spoke as a woman in a space dominated by men. [She] gave you a glimpse into her life and didn’t simply push biblical ideas.”

“It felt like she was able to help her readers stay focused on Christ and loving others, while too much of the church is focused on political power,” he adds.

Linda Wiebe Dickinson: ‘Each of her books has come into my life at a time when it was needed’

When asked which of Evans’s four books has been the most meaningful to her, Linda Wiebe Dickinson has trouble answering.

“Each of these books has come into my life at a time when it was needed, so I’m not sure I could pick a favourite,” she says.

The 46-year-old, who attends Foothills Mennonite Church in Calgary, Alta., read Searching for Sunday at a time when she was “pretty disenchanted with the notion of church” and how her family fit into its church community.

One of her children belongs to the LGBTQ community, and two of her other children are on the autism spectrum.

“Her words helped me to see that it’s OK that people at church see the messiness of our lives,” says Dickinson, who is the material resources coordinator for Mennonite Central Committee Alberta.

“She writes about how the doubt, the angst, the sorrow, the grief and the joy of life all should be welcomed and acknowledged in a church community; that it's the yuckiness of life that we share that draws us closer to our faith communities and to God.”

Susie Guenther Loewen: ‘She was inspiring without being syrupy or fake’

“She kind of articulates things that are really relevant to our world today and yet also are rooted deeply in the Christian tradition,” says Loewen, co-pastor at Nutana Park Mennonite Church in Saskatoon, Sask., who holds a PhD from the Toronto School of Theology.

“In a way it’s similar to some of the things I’ve studied in academic theology, but she’s saying it in a way that’s very accessible to anyone.”

“Even just that they had asked her to be their keynote speaker was really inspiring for me, as someone who’s sort of her age,” Loewen says. “She was a young woman in leadership in the church, and she was taken seriously. It felt like a really groundbreaking thing for her to be a main voice in the Christian world.”

“She was inspiring without being syrupy or fake,” Loewen adds. “She was honest and had a profound hope that drove her.”

Anneli Loepp Thiessen: ‘Rachel’s work can be a guide for our churches today’

Anneli Loepp Thiessen remembers how she felt after reading Evans’s book, A Year of Biblical Womanhood.

“I think often we fall into this idea that the Bible is outdated, and that liberal Christians don’t really need to concern themselves with what the Bible says,” says Thiessen, 23, a graduate student in music at the University of Ottawa. “Rachel took that idea and turned it on its head, allowing the gospels to speak to us in completely fresh ways. She followed Jesus’s teachings with passion and vigour, which allowed so many people around her to reclaim the Bible as an integral part of their faith.”

Thiessen, who attends Ottawa Mennonite Church, strongly encourages people to engage with Evans’s writing, “even if it makes them uncomfortable and it pushes them to think in ways that are foreign to them.”

“I really believe that Rachel’s work can be a guide for our churches today,” Thiessen says. “We can continue Rachel’s legacy by praying with the thousands of Christians who have learned from her.”

Further reading:
When it's hard to go to church
Who are the millennials?