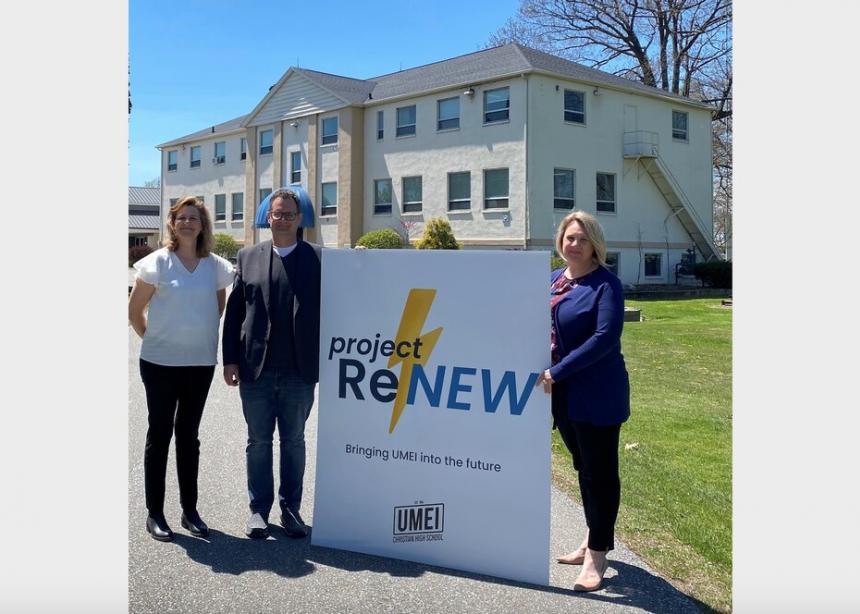 The sanctuary of North Leamington United Mennonite Church was packed on March 9 as supporters of UMEI Christian High School gathered for a special meeting.

The UMEI board had been facing difficult numbers for several years, and it was time to face the question: “When is it time to say that it’s no longer sustainable to keep the school open?”

Enrolment for the whole school is 35 students this year, slightly more than half the target for sustainable enrolment of 60 students, a target that has only been met for three of the past 10 years.

Creative solutions have been sought: Two grants from Mennonite Church Eastern Canada between 2015 and 2020 paid for an advancement director, but that did not turn around the enrolment. In 2020 and 2021, the federal government’s COVID-19 wage subsidy gave a significant boost to the school, and in 2022 the school severed and sold a rental house from the property.

Conversation was robust, and the community’s desire to save the school came through clearly. But barriers to increasing enrolment were also named.

David Dyck, pastor of Leamington United Mennonite Church, opened the meeting by recalling March 7, 2020, when the community gathered at the Bank Theatre for a robust and joyous celebration of UMEI’s 75th anniversary.

The community context is changing. Enrolment from MC Eastern Canada churches is not as strong as previously, in part because the churches are shrinking, leaving fewer families to enrol their children at UMEI.

If the school is to survive, there needs to be creative and widespread change.

Fast forward a couple of months to May 4, when the board launched its ReNew campaign, an ambitious four-part strategy aimed at increasing the community exposure to the school and raise enrolment.

The first pillar involves re-organizing the leadership structure of the school, engaging teacher Darcy Bult as vice-principal to tend to day-to-day affairs, while freeing principal Sonya Bedal to work with the board at larger projects of vision and mission.

Chani Wiens was named as director of enrolment and community engagement. She will direct her passion for the mission of the school in connecting with the larger community, getting people in the door, and bridging barriers to enrolment. Together, these new positions will collaborate on maintaining the academic excellence of the school, while communicating the strengths of the school community to potential students and their families.

“I am so passionate about leading and guiding young people and I believe the high school years are so crucial,” said Wiens. “I never want [what we have at UMEI] to stop. While we honour the 77 years of the past, we will focus on being what the school students need in 2022, 2025, 2030 and beyond.”

Community support has come in with dollars behind it. The second and third pillars of the campaign involve a 50 percent reduction in tuition and free transportation for those who have a need for it for the next two years. UMEI is outside of Leamington, with no public transit options to the school.

Finally, there will be some facelifts to the school building, including repairs to the library and some work on the exterior of the building.

The total campaign goal is to raise $800,000 over two years. A quarter of that had already been raised as the campaign launched.

The key metric of the success of the campaign will be enrolment, but other metrics will be watched closely, including student and parent satisfaction.

Response from community members at the meeting was warm.

Mary Krueger said she was impressed by the factual support brought by the board to the campaign, and that the positive vote shows there has been support for the school from the local community, including the support of two local MC Eastern Canada congregations.

Abby Krueger, a recent UMEI grad, sees a lot of potential in the plan, and is especially excited about the new roles for Bolt and Wiens.

Simon Enns said he was particularly excited about the reduced tuition, hoping that UMEI can reach more students for whom money is a barrier.

Time will tell if this campaign will mark a turning point in the school. What is clear is that the community is rallying to ensure that the school does not disappear without a fight.