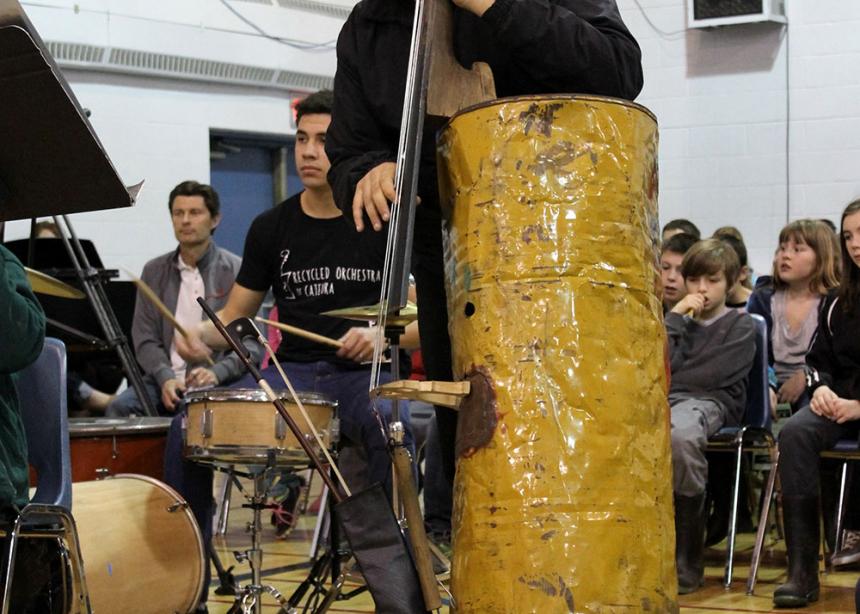 All of the instruments played by members of Paraguay’s Recycled Orchestra are made from garbage, including this upright bass fashioned from a discarded oil drum.

What do cake pans, candy tins, bottle caps and wooden pallets have in common? They were all found in a landfill, and they’ve all been made into musical instruments for Paraguay’s Recycled Orchestra.

Cateura is a slum built on that landfill near Asunción, Paraguay’s capital. Residents earn their living by scavenging for items they can sell. Wanting to help the children of Cateura, Favio Chavez, an environmental engineer working on a recycling project at the landfill, started offering music lessons. When more children showed up for lessons than there were instruments, Chavez partnered with Nicolas ‘Cola’ Gomez, a garbage picker, and the two began fashioning instruments out of garbage. These recycled instruments offered a distinct advantage; being made of garbage they were unlikely to be stolen. Soon the Recycled Orchestra was born and Chavez became its director.

When filmmakers creating a documentary about the orchestra released a teaser for their film, Landfill Harmonic, on You Tube, the orchestra became an Internet sensation. Before long they were invited to perform around the world.

Recently, 16 members of this unique ensemble toured Canada under the auspices of Global Family Foundation, in an effort to raise funds for their community. They performed four concerts in Ontario, four in Manitoba and four in British Columbia. Their only Saskatchewan stop was at Rosthern.

Eigenheim Mennonite Church, near Rosthern, was invited to host the orchestra because of a long-standing friendship between Pastor Allan Friesen and Global Family president Rudolf Duerksen.

Friesen has lived and worked in Paraguay, and returns regularly to visit. While there earlier this year, he and three other church members visited Cateura. “Cateura was the only place in Paraguay where I have ever felt uncomfortable” because of the visible presence of gangs, he says. “Paraguay is known for its beauty, but most of that beauty is missing in Cateura. Few trees line the streets [and] there is little room to live.”

The orchestra, according to Friesen, “is the one thing the neighbourhood has going for it, the one thing residents can point to and say, ‘This is ours, and we are proud of it.’”

Eigenheim Mennonite collaborated with Rosthern Junior College (RJC) to host two concerts on May 6 in the school gymnasium. In the afternoon, the orchestra performed for elementary and high school students, and Chavez invited audience members forward to try the recycled instruments for themselves. The evening performance, which was open to the public, included repertoire ranging from Mozart to John Lennon and from an Argentinian tango to Paraguayan folk melodies.

RJC students Gabby Martin and Benjamin Schulz presented the orchestra with a cheque for $1,300 on behalf of the student body. Students and staff raised the money as part of an annual charity fundraiser.

Teacher Ryan Wood, also a member of Eigenheim Mennonite, described the donation as “a gift exchanged between youths of different cultures.” The orchestra gave the school a gift of music; in return, students gave a gift of thanks with their donation. The rest of the audience said thanks with their gifts as well. Money raised on the tour will help build a new school and community centre in Cateura.

“We have a lot to learn from our brothers and sisters in the Global south,” said Wood. “They are the ones modelling environmental stewardship and doing 'more with less,’ while we continue to over-consume and mindlessly throw things away.” Wood also appreciated “the message that beauty can be found in ugly places. This is as true for people and relationships as it is for things. No one is beyond redemption.”

All of the instruments played by members of Paraguay’s Recycled Orchestra are made from garbage, including this upright bass fashioned from a discarded oil drum. 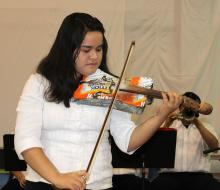 The Recycled Orchestra boasts violins made of cake pans. 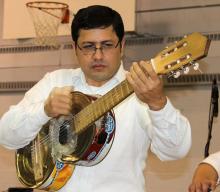