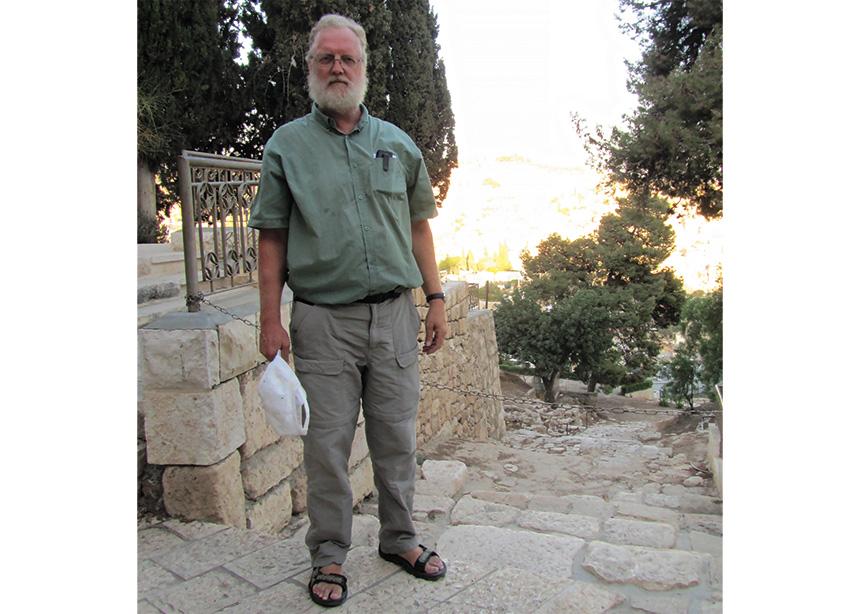 John Braun is pictured in 2010 by the ancient steps that lead from the upper city of Old Jerusalem down to the Kidron Valley and the Mount of Olives. (Photo courtesy of John Braun)

Deuteronomy urges people to “fix these words of mine in your hearts and minds,” and Ken Quiring has dedicated himself to this call. Telling Scripture by heart is an integral part of daily life for the pastor of Grace Mennonite Church in Brandon, Man.

He formally got into the practice of sharing Scripture from memory when he attended his first festival gathering of the Network of Biblical Storytellers International in 2012.

The annual four-day festival of interactive workshops celebrating biblical storytelling is “basically like going to the Winnipeg Folk Festival for Bible nerds,” he says, adding that the transformative experience made him realize, “Oh my goodness, I’ve never heard Scripture alive before!”

Telling Scripture by heart is now a regular fixture of worship services at Grace Mennonite. Quiring works on memorizing—what he calls internalizing—three stories at all times: one for the upcoming Sunday and for each of the following two weeks. This is the main portion of his sermon, which also includes interactive conversation with the congregation. Church members, grey-haired and youths alike, have also begun to take turns doing biblical storytelling.

John Braun has seen how hearing Scripture engages people. “You can tell by the way they listen and how attentive they are and the emotion on their face,” he says. “There’s a power to [Scripture] that is quite extraordinary I think,” he says.

Braun was a pastor of Charleswood Mennonite Church in Winnipeg for 25 years before retiring in 2019. He has been reciting Scripture ever since he started working in ministry more than 40 years ago.

He says he was inspired by memories of his maternal grandmother: “She would recite these epic German poems, and I remember her doing that publicly . . . that struck me.” When he witnessed fellow Mennonites Arlyn Friesen Epp and Rudy Franz recite Scripture, he was intrigued.

Braun began by committing to memory the text he was preaching on each week. Soon he began learning longer passages. He has memorized the Sermon on the Mount, the passion story and the Resurrection story, among others, some lasting 15 to 20 minutes long.

“When I do this practice, I become aware of how much Scripture was meant to be an oral experience, and that’s the way it started,” he says. “As I started to learn how to memorize, I realized more and more how there were cues in the text itself that helped the memorization process.”

Internalizing Scripture connects him with the ancient peoples who would have done the same, helping to form Scripture before it was ever written down. “It helps me to understand the story anew in a fresh way, and it also helps me to present it that way,” he says.

While on a sabbatical in the Holy Land, Braun would walk from Bethlehem to Jerusalem and recite aloud the Passion Story in Luke. “I would look around and I would see the geography, and it became a very meaningful experience.”

Andrew Dyck memorized the entire Book of Ephesians, living in close relationship with the gospel over the span of a couple months. It engaged him on a deeper level than studying or teaching it had, although those experiences gave him an essential foundation. “It’s as if Ephesians became a friend,” says Dyck, assistant professor of Christian spirituality and pastoral ministry at Canadian Mennonite University. “I think I grew theologically in my understanding of Ephesians because I started making connections through the book that I wouldn’t have made otherwise. You start to see themes that trace through.”

In Quiring’s experience, the modern western church has prioritized head learning over heart learning. He has been disappointed when some congregants have deemed biblical storytelling to be too emotive and susceptible to error, assuming it’s only for children or associating it with negative charismatic stereotypes.

“Biblical storytelling, for me, has been a very visceral experience, but it has also been a deeply multi-sensory experience, partnering print-literate, academic scholarship together with spiritual directors and spiritual practices that are more heart-focused,” he says.

He says that embodied worship experiences add so much to spiritual life, something he has learned from Indigenous youth and Pakistani Muslims, who are passionate about their own oral traditions. He is enthusiastic about exploring how biblical storytelling can be used for interfaith dialogue and reconciliation.

For Braun, reciting Scripture became a spiritual practice that helped centre him during difficult times in his pastoral work. He says it is “the listening side of prayer” and it continues to be an important practice for him. “There comes a point where you internalize it, and the story just comes out of you.”

How to tell Scripture by heart

Memorizing chapters of Scripture, or even a few verses, may seem daunting. But with time and practice, and some of the helpful tips below, it’s possible to become a biblical storyteller. 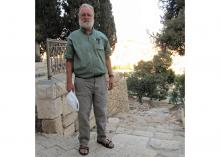 John Braun is pictured in 2010 by the ancient steps that lead from the upper city of Old Jerusalem down to the Kidron Valley and the Mount of Olives. (Photo courtesy of John Braun) 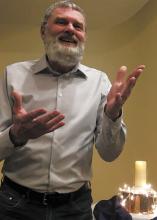 Ken Quiring is a member of the Network of Biblical Storytellers and pastor of Grace Mennonite Church in Brandon, Man. (Photo courtesy of Ken Quiring)