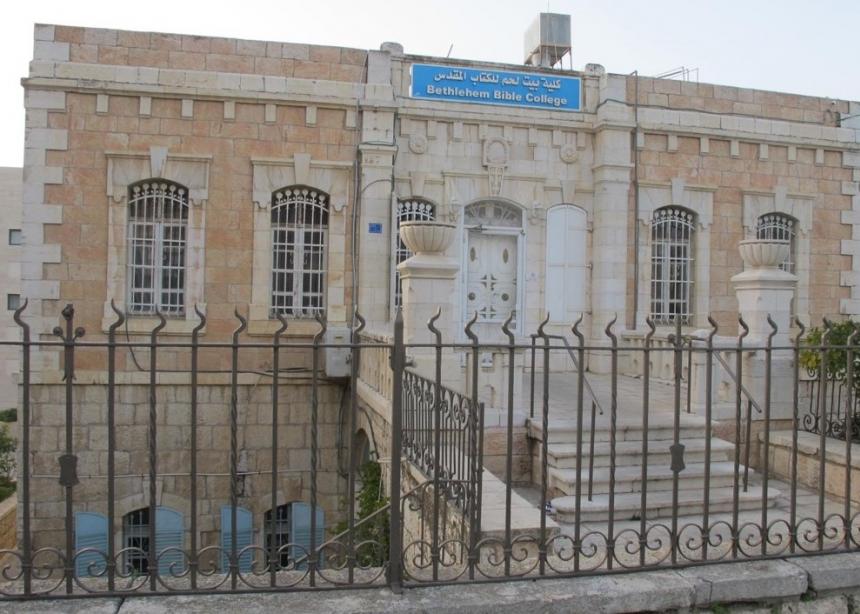 Bethlehem Bible College, which serves Arab speakers in Palestine-Israel and beyond, was founded in 1979. Its first president, Bishara Awad, worked with Mennonite Central Committee in Bethlehem and spent a year at Mennonite Brethren Biblical Seminary in the 1980s.

Like other educational institutions around the world, the West Bank’s Bethlehem Bible College has been broadsided by the COVID-19 pandemic. Campus lockdowns, infections among staff, a greater dependence on online instruction—all have been the new reality, in addition to the ongoing political uncertainties in the region.

Amid the challenges, Mennonite Church Canada, through its International Witness ministry and the MC Canada Palestine-Israel Network, has been forging a new partnership with the nondenominational Bible college, which serves Arab speakers in the Holy Land and beyond.

It’s not a new relationship; off and on, since the college’s founding in 1979, Mennonites have been involved in providing funds and short-term volunteers, either through Mennonite Central Committee (MCC) or MC Canada.

“These partnerships are first and foremost an encouragement to us,” says Jack Sara, the Bible college’s president. “They tell us that we are not forgotten by the western church, and we know we are not alone in this time when we are caught between a rock and hard place.”

He refers not only to the pandemic, but also to two ongoing realities in the Palestinian territories: the small and diminishing presence of Christians (currently less than two percent) among a predominantly Muslim population, and the ongoing suffering that all Palestinians experience under Israel’s 53-year-old military occupation.

Sara is pleased about the “reciprocity” envisioned in the new partnership that focuses on people-to-people exchanges, that will involve Canadian Mennonites and Bible college faculty and students visiting each other and sharing their insights on such issues as faithful living in difficult times, and pursuing peace and justice.

Jeanette Hanson, MC Canada’s International Witness director, says that developing this partnership has been an “education” for her. “I have been so excited to see the many ways that Palestinian Christians can speak into issues that we grapple with as followers of Jesus here in Canada.”

The MC Canada network includes working groups and individuals from MC Canada’s regional churches in Eastern Canada, Manitoba, Alberta and British Columbia, totalling about 40 MC Canada members. Regional representatives meet quarterly by Zoom to update each other on various local activities and to consider broader initiatives such as the Bible college partnership.

In the last four years network members have mounted a variety of actions following up the 2016 resolution, including leading and sponsoring educational events and sermons in churches on Christian Zionism, the Christian community in the Holy Land, and advocacy; meeting with politicians to press Canada to uphold international law and human rights, including an MC Eastern Canada working group delegation to Ottawa in 2018; and promoting prayer, petitions and Palestinian fair trade via church bulletins.

The greatest rewards of this work for many network members have had to do with the camaraderie and energy that comes in a common cause for justice. Many have worked or toured in Israel-Palestine and came back with a passion to work for change. The groups in Manitoba and Eastern Canada also include several university students who find the network a place to work out their convictions on peace and justice.

Kathy Bergen of Kitchener, Ont., a retired worker in the Middle East, finds gratification in the reception she has received in the many MC Canada churches. “Once they hear of the issues and personal stories of Palestinian people, many people's attitudes change and they begin to see Palestinians as human beings who have rights and are in need of justice and freedom,” she says.

But the challenges are also real. Palestinian rights and self-determination seem more remote than ever in the wake of Israel’s announced intention to annex large and fertile swathes of the West Bank. The accelerating pace of home demolitions in the West Bank and suppression of Palestinian culture in East Jerusalem discourage or energize would-be advocates.

Erin Yantzi, a political-science student and outgoing chair of the Eastern Canada working group, observes that many Mennonites struggle to make sense of differing interpretations of Scripture with regard to Israel, the nonviolent peace teaching of Jesus, and the call to combat anti-Semitism, while also upholding the call to support those living in oppressive conditions. The network seeks to help constituents explore all of these questions, particularly through Palestinian eyes.

While the challenges may make the work slow, risky and unpopular, the bottom line for the network remains: Palestinian Christians, ever persistent in their hope, have called the global church to remain with them in their quest for justice and liberation for themselves and also their Israeli neighbours.

For more information on the MC Canada Palestine-Israel Network, or to sign up for its newsletter, visit mennonitechurch.ca/pin. For current updates, visit the MC Manitoba Friends of Palestine Facebook page at facebook.com/mcmfriendsofpalestine. 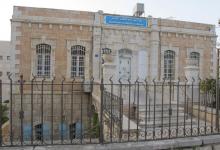 Bethlehem Bible College, which serves Arab speakers in Palestine-Israel and beyond, was founded in 1979. Its first president, Bishara Awad, worked with Mennonite Central Committee in Bethlehem and spent a year at Mennonite Brethren Biblical Seminary in the 1980s.

Carolyne Epp-Fransen, centre, speaks on behalf of the MC Manitoba working group at a September 2018 symposium on international law, hosted by several Winnipeg advocacy groups. To her left is Dean Peachey, a fellow working-group member. Featured speaker Michael Lynk, second from right, was the United Nations special rapporteur for human rights in the Palestinian Territories. (Photo by Gordon Epp-Fransen) 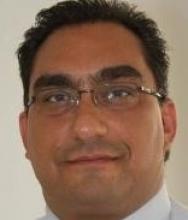