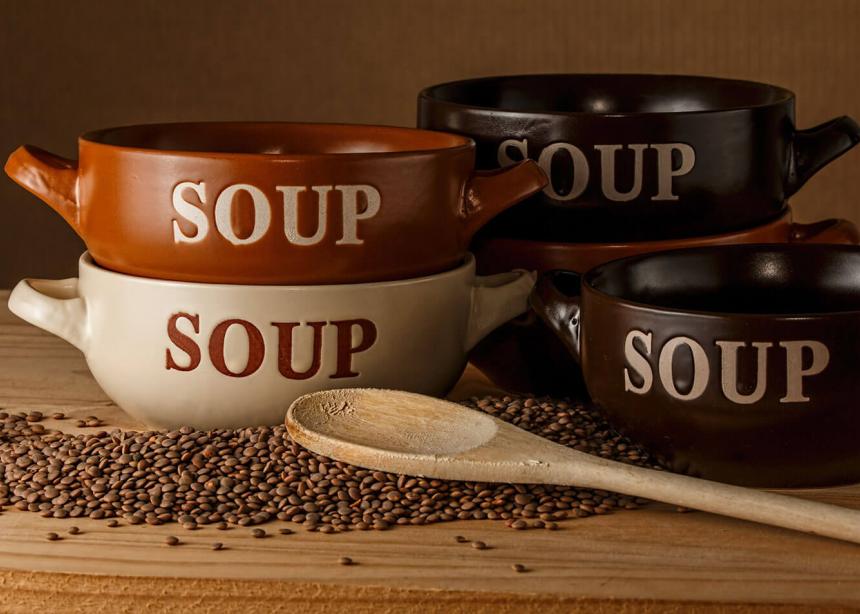 In the feature “A new recipe for church” pastor and professor Carol Penner reflects on how the “recipe” or model for the church is evolving and adapting to new realities. She finds the metaphor of soup a helpful one.

The first soup Carol learned to make was Hearty Lentil-Sausage Soup, according to the recipe on page 212 of the More-with-Less Cookbook (1976 edition). It became her favourite, but, over the years, she adapted and changed the original recipe until a unique soup creation emerged. And then one day she learned to appreciate a completely different soup flavour.

Remove meat and pour off all but ¼ cup drippings.

Simmer 30 minutes or until tender.

From More-with-Less Cookbook. © 1976 by Herald Press. All rights reserved. Used with permission.

“Hearty Lentil-Sausage Soup”
This is the variation Carol Penner developed over a 20-year period.

Add:
2 medium onions
Cook 5 min. or until onions are tender.

Simmer for 60 to 90 minutes, until barley is cooked and vegetables are tender. Serve with home-made biscuits.

Continue to fry for another minute or two. (If it gets dry, add a bit more oil)

Add and simmer for ten minutes:
1 large can tomatoes (crushed, chopped or whole)
1 small can tomato sauce
salt and pepper to taste

Puree the soup with ½ cup peanut butter.
Cut up the chicken and add to the pureed soup.
Serve with bowls of garnishes for people to add as they wish: chopped green onions, chopped cilantro, chopped peanuts, un-sweetened coconut.

Which soup is your favourite?