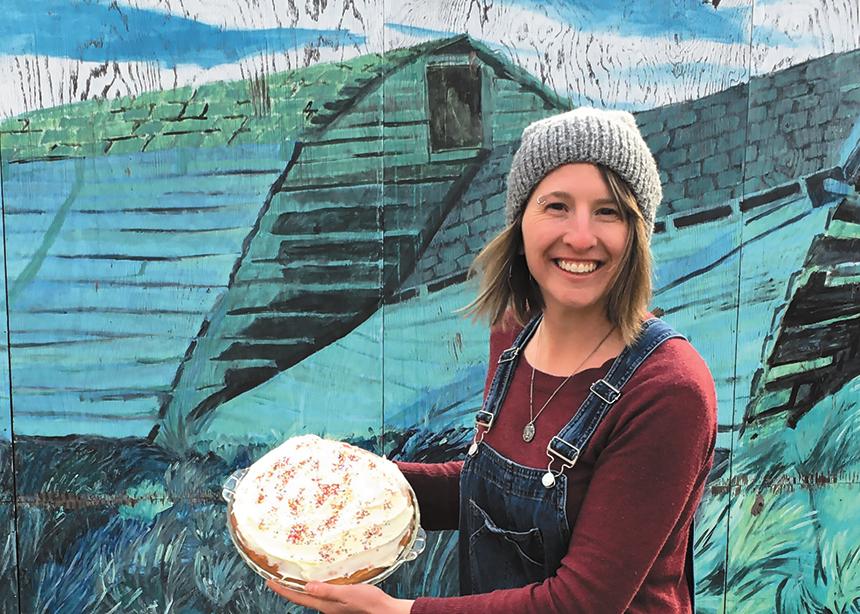 She couldn’t gather family and friends around her table to eat paska this Easter, so Heather Driedger decided to hold a virtual paska bake-off instead.

Paska is a rich yeast bread popular among those of Russian Mennonite heritage. Traditional paska is served at Easter with a sweet cottage cheese spread called glums. Modern-day bakers often prepare a cream cheese spread to eat with their paska. Loaves are often decorated with icing and coloured sprinkles.

Driedger invited submissions to her online contest via Instagram. She received 25 submissions from family members and friends.

“They came from all across Canada—from Montreal to Vancouver and many places in between,” says Driedger. She even received entries from friends in Colorado and Germany.

“It was neat to see everyone’s different takes on paska,” she says. Among the more unusual entries were a gluten-free paska and a sourdough version.

Her Colorado friend, who is originally from Kansas, baked her paska in tins. Kansas Mennonites say that bread baked this way reminded them of the domes of Orthodox churches in Ukraine, where they came from.

Contestants could enter a photo or a video of their paska. They sent their entries to Driedger via email, and she, in turn, posted them on her Instagram page. Each entry included ‘Yes’ and ‘No’ buttons, enabling viewers to vote on the appearance of the different breads.

“Some people staged their photos with Easter eggs and Easter grass around [the paska],” she says. “Some just sent a photo of their loaf. Others made videos and tried to make it funny, or elegant and culinary.”

“A few people sent pictures even though theirs didn’t turn out,” says Driedger. “People were generally pretty kind.”

On Easter Sunday, Driedger tallied the votes and declared the winners. Holly Brown of Germany received 98 percent positive votes for her Ukrainian braided-style bread. Maria Krause of Vancouver also received 98 percent with her tongue-in-cheek COVID-19 paska. Megan and Jesse Krause of Winnipeg came in second with a score of 96 percent. The lowest score was 46 percent.

Driedger says that winning the bake-off entitles them to “no official prizes other than receiving the virtual ‘paska pandemic crown.’ ”

“A lot of people were thanking me for the opportunity to do something special on Easter weekend,” she adds. “The best part of it, for me, was just hearing from everyone throughout the weekend.”

Driedger didn’t enter the bake-off herself, although she did bake her own paska. She says that, as she baked, she remembered Good Friday services at Home Street Mennonite in Winnipeg, where she grew up. A number of congregations attended the services, which would always be followed by “a feast of paska” in the church fellowship hall. “It’s one of my strongest memories of Easter,” she says.

“It felt like a holy moment as I was working the dough and thinking about these things,” says Driedger. “It was a way to celebrate Easter and be more meditative—to think more about the meaning of Easter.”

This article appears in the April 27, 2020 print issue, with the headline “Online contest gathers friends around a virtual table.” Do you have a story idea about Mennonites in Saskatchewan? Send it to Donna Schulz at sk@canadianmennonite.org.

zest of one orange 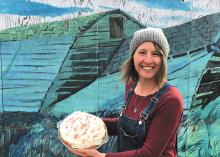 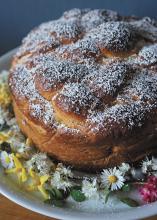 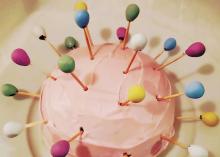 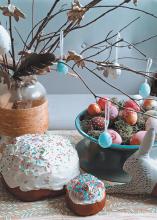 Megan and Jesse Krause took second place in the paska bake-off with this entry. (Photo courtesy of Heather Driedger)