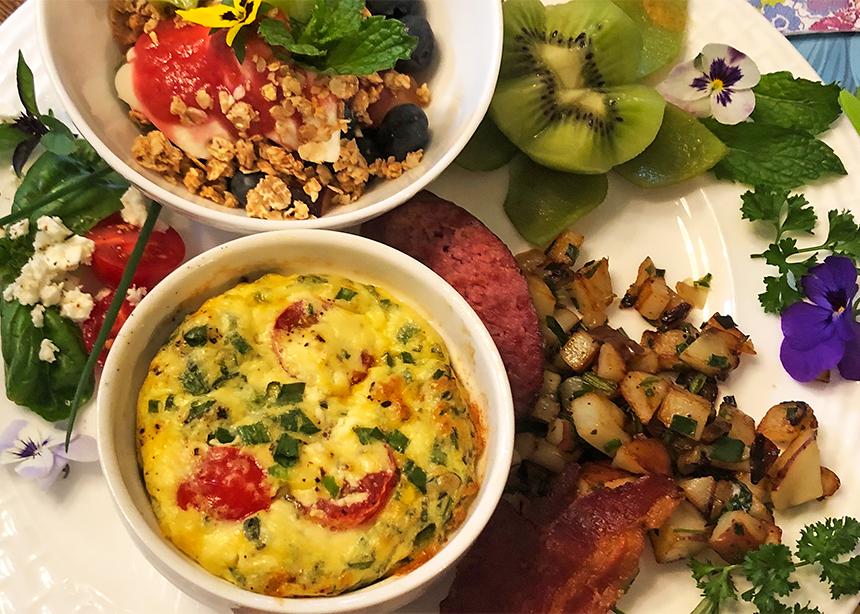 When I serve omelettes to my bed and breakfast guests, I usually complete their plates with one slice of bacon, one piece of locally made “Mennonite sausage,” a small bowl of fresh fruit with yogurt and granola, and either a slice of whole grain toast or a small portion of homemade hash browned potatoes.

I developed this original recipe as part of a school nutrition program. Read the story behind the recipe here.

Preheat oven to 375° F. Spray a 9 x 13-inch baking dish with non-stick cooking spray, or line it with parchment paper.

Whisk the eggs in a large bowl together with the milk. Stir in the cheese, onion, peppers and black pepper. Optional: add chunks of ham.

Pour the mixture into the prepared pan.

Bake for about 45 minutes, or until the top is slightly golden and a knife inserted in the middle comes out clean. This recipe serves 12.

Five years ago, my husband, Stewart and I moved to Rosthern, Saskatchewan, to become the owners of a traditional bed and breakfast. Since then I have adapted the original recipe, making it more “sophisticated.”

For each person, use one egg and mix them together. To this, add:

Salt isn’t needed, because the cheese is salty enough. The only thing I haven’t needed to substitute yet is the egg, and apparently there are viable substitutes for that, too!

I often divide the mixture evenly into non-stick, sprayed, individual, miniature baking dishes and bake them for about 20 minutes at 400° or until they’re puffed and golden brown. 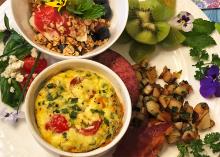 When I serve omelettes to my bed and breakfast guests, I usually complete their plates with one slice of bacon, one piece of locally made “Mennonite sausage,” a small bowl of fresh fruit with yogurt and granola, and either a slice of whole grain toast or a small portion of homemade hash browned potatoes.

I have great difficulty with labeling a sausage "Mennonite."
That does great injustice to our understanding of what it means to be Mennonite, and puts us all back into some kind of non-faith ethnic box.
Why not just call it farmer sausage?
After all, we don't hear about Baptist or Catholic foodstuffs.

I had to smile when I read your comment. I get where you're coming from. But for me, when I see sausage labelled as "Mennonite" or "Mennonite-style", I know I can expect to get that distinctive smoky flavour in sausages traditionally made by Mennonites (including my dad) for many years. On the other hand, it's hard to know what I'm getting when I buy Farmer's sausage, and have been disappointed many times because they usually lack that irresistible smokiness.

I suppose one solution might be to call it "Worscht", the Plautdietsch word for sausage, but I'll be more than happy to serve Mennonite sausage with Glums Verinika as long as it's around. :)

yup. luv the stuff. altona. winkler. saskatoon. mennonite farmer sausage fits 'cause the Lutherans, Catholics, United Church and Anglican folks, as a fine a folks as they are don't hold a candle sausage making that results in Mennonite Farmer sausage.

And if you genderize, and justifize, and racialize Mennonite Farmer Sausage, maybe the Federal government should throw up their hands and stop subsidize (ing) the publication of this much ado about a potluck favourite?

Yes! Thank you for your comment, Les. You are right! I just saw your comment today (almost a year later!) so I do apologize for the late reply. As a newcomer to the Mennonite faith, I actually didn’t understand the difference! However, since I wrote this article, a dear (Mennonite) friend explained it to me. I now refer to it as “Mennonite farmer sausage” - as in the farmer who made it was Mennonite - but maybe I’ll consider dropping the Mennonite part now! When we know better, we do better. Thanks again! Sincerely, Jill